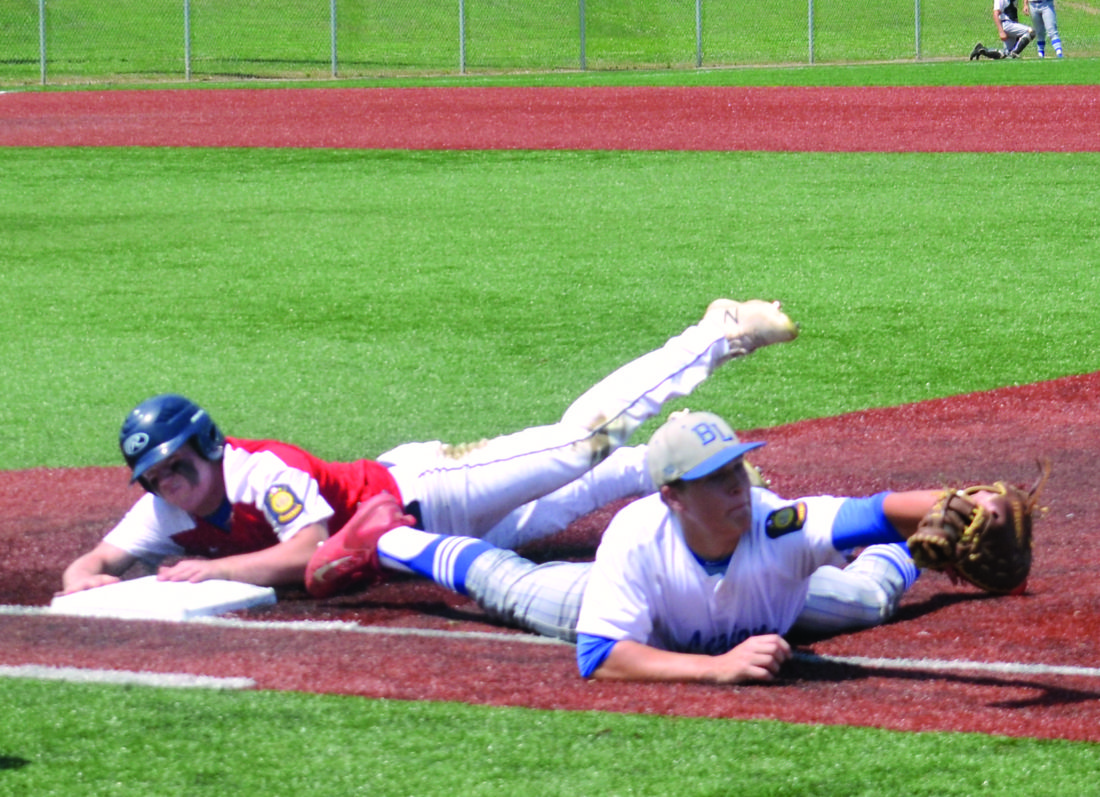 LANCASTER — Tyler Bradford was on.

“I felt really good,” said Bradford, who is Potomac State College of West Virginia-bound to play baseball next season. “I just threw strikes, and the defense played good behind me.”

Bradford threw 110 pitches in 6 2-3 innings of work on the bump. He fanned 10, walked two, and scattered three hits.

Todd Engle was inclined to agree.

“That’s the Tyler Bradford of old,” said the veteran American Legion baseball skipper. “When the lights are the brightest, he always shines in the big games. He gave it everything he had.”

“I’ve got to tip my hat to him (Bradford),” he said. “He kept us off-balance, and we struck out too much — and that was a big key, because we couldn’t get a clutch hit.”

Bradford struck out the first two Sandusky batters he faced. Then, he gave up a single to Mikey Haynes and walked Cayden Rollins before fanning Ryan Lozier to retire the side.

In the bottom half of the frame, Fisher gave up a leadoff double to Tate Engle. But the Bev/Low shortstop was stranded when Fisher retired the next three Post 389/750 batters.

“Tate’s seeing the ball pretty good,” Todd Engle said. “I like where he’s at.”

Cook singled to left to lead off the second, advanced to second on Konnor Roberts’ sacrifice and to third on Tanner Neal’s bunt hit down the third base line.

Cook then scored on a Fisher wild pitch, and later, Neal legged it home on Luke Nelson’s slap-single to left, making it 2-0.

BevLow stretched its lead to 3-0 in the sixth when Bradford raced around third on a throwing error and then scored when the Sandusky backstop fumbled the ball, trying to tag him out.

“You know, everybody’s good in this tournament,” Todd Engle said. “But we were able to capitalize on their errors.”

In the top of the seventh, Bradford struck out the first two Post 83 batters, and then because of the pitch count limit for a game, he was relieved by right-hander Konnor Roberts. Roberts got a groundball out to end the game.

“The first game in this tournament is always the toughest,” Bradford said.

Beverly/Lowell is now scheduled to play the Circleville Post 134/Utica Post 92 winner at 7 p.m. today. Righty Kam Hesson of Caldwell is expected to get the starting nod on the hill for Post 389/750.

Meanwhile, Sandusky takes on the Circleville/Utica loser in an elimination game at 1 p.m. today.

“We’re still in the tournament,” Samstag said. “We’ve just got a longer way to go.”