PCHS did things ‘different’ this summer 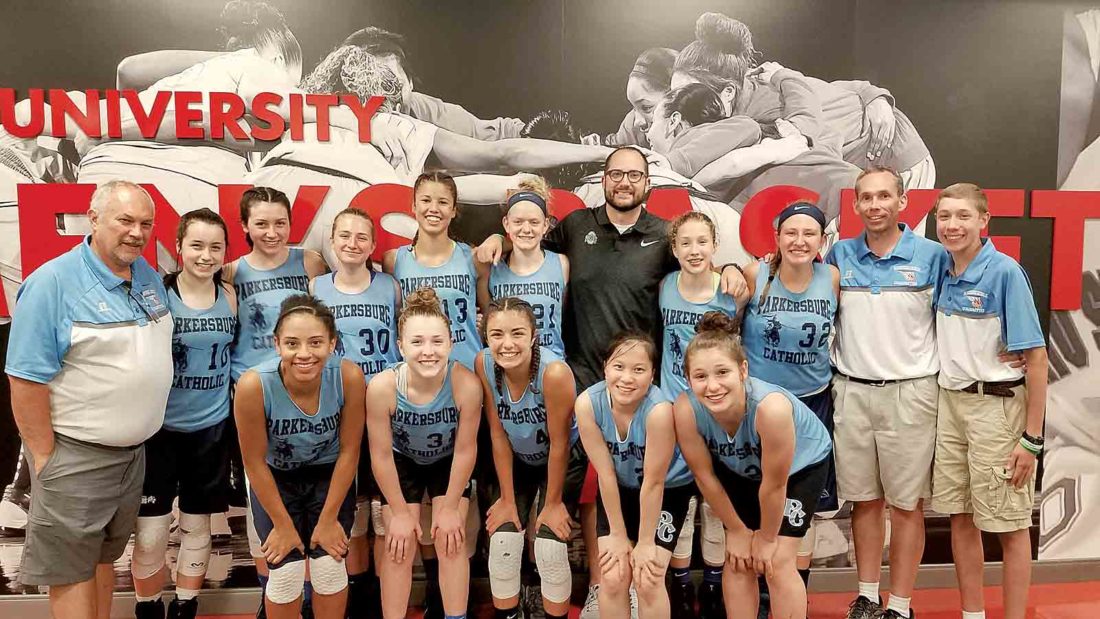 Courtesy photo The Parkersburg Catholic girls basketball team poses for a team shot after competing in a tournament this offseason at Ohio State.

PARKERSBURG — It was quite a three-week coaching period in June for the Parkersburg Catholic girls basketball team.

Not only practicing in their gym, but Marty Vierheller’s Crusaderettes, who broke a nine-year state tournament drought last season, traveled to two shootouts as well as a team camp at Ohio State University, where the PCHS girls held their own pretty much when playing a pair of Division I Ohio schools.

Of course, Catholic is coming off “a dream season for us,” said Vierheller, when it went 24-0 before falling in the state tourney. “There are so many highlights, so many moments looking back on it that still continue to bring a smile to my face, especially since it was a long road back to Charleston for us. Last season was just special.”

And despite a two-point loss to Summers County in the Class A state quarterfinals, “we knew when we left the floor that we certainly belonged there and the girls are hungry to get back,” said Vierheller.

As for the three-week summer coaching period for Vierheller, “it’s important for us to get our girls together, work on skills and acclimate the freshmen,” he noted.

“But this summer too, we tried to strike a good balance between taking advantage of the time we had with our girls without overdoing it. I think that’s really important — at least the way that we look at it.”

So, added Vierheller, “we had a lot of fun this summer, taking advantage of the three weeks to do several different things.”

Sure, they got their work done in the gym, “doing a lot of teaching and the practices we had I think were very beneficial for them and for us to gauge where they are,” said Vierheller.

But also the Crusaderettes had two teams that participated in the WCRC summer league at Blennerhassett over the course of six weeks and “gained a lot of experience there,” said Vierheller.

However, “the highlights of the summer involved participating in three different events,” said Vierheller.

The first was a shootout at the University of Mount Union in Alliance, Ohio, “where we won all of our four games and were champions of our pool,” said Vierheller.

Then it was on to Columbus, where the next day, Catholic participated in OSU’s women’s basketball camp, “which was great,” said Vierheller. “At the camp, we played two games, one on the main floor at the Schottenstein Center, which was an awesome experience. We played Springfield on the big court and lost by one point, and later on played Cleveland Garfield Heights and we won by 15 (63-48). It was just a great opportunity for our girls to go there.”

Plus, Belpre native Patrick Klein, who is a women’s basketball associate head coach at OSU, “was most gracious and even took our team on a little tour around and about the Schott,” said Vierheller. “It was a wonderful experience and I’m very thankful for Partrick for taking care of us.”

The final excursion was to St. Albans for another shootout “and we won our three games there,” said Vierheller.

“One thing,” though, “that I’m really excited about that I’ve learned is that our (five) freshmen this year are much further along that (assistant) coach (Tom) Carr and I thought they were going to be,” said Vierheller.

Last season’s Crusaderette squad was “much deeper than we had been in a while,” said Vierheller. “And now, though, with the graduation loss of three seniors who gave it their all to the team in Olivia Ullman, Mikayla Alkire and Julia Ambrozy, we think we’re going to be able to get immediate help from our rising freshmen to keep our depth intact.”

Still, a noteworthy fact that only one senior on the 2018-19 team means the dozen players who vastly contributed to Catholic’s success last season as sophomores and freshmen will be back for the next two or three years respectively brought a wide smile to Vierheller.

That group includes such stalwarts from last year as Emma Gardner, Madeline Huffman and Emma Pfeiffer who will be juniors this season along with to-be sophomores Jenna Boice, Aaliyah Brunny and Madison Ross.