RON JOHNSTON The Marietta Times Williamstown’s Emma Berman (27) eludes Warren defender Olivia Shutts (1) and kicks the ball to keeper Madison Miller, who made the save Tuesday at Warrior Field. 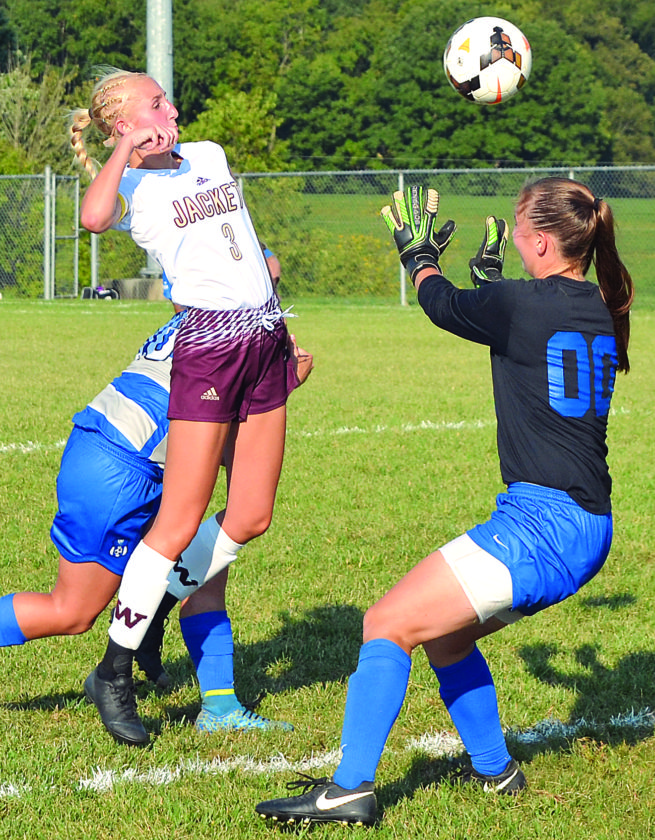 The Williamstown High freshman went from misfiring on an early-game PK attempt to scoring a goal in the final seconds as the Yellowjackets edged Warren, 3-2, in girls’ soccer action Tuesday night.

“That just shows what a gamer she is,” said first-year Williamstown head coach Ben Rinehart. “It doesn’t matter about the last play. It just matters about the next play, and she really exemplifies that. I tell you what, the sky’s the limit for that young lady. She works hard and leads by example.”

Lilly McMullen and Emma Berman each had a goal for the Jackets, who improved their record to 3-0. Maroon and gold keeper Mara Rinehart was credited with seven saves between the pipes.

“This was an extremely exciting game,” said McMullen, one of four Williamstown captains. “I was on my toes the whole time. I was ready to go.” 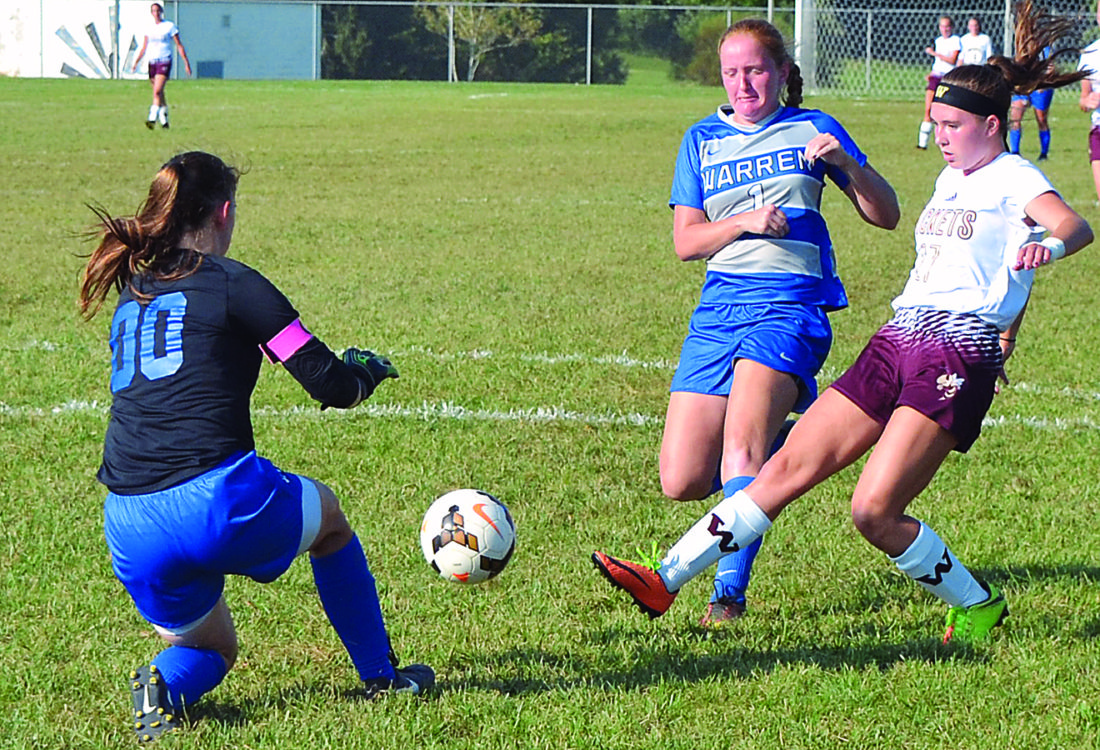 RON JOHNSTON The Marietta Times Williamstown’s Emma Berman (27) eludes Warren defender Olivia Shutts (1) and kicks the ball to keeper Madison Miller, who made the save Tuesday at Warrior Field.

Warren, after winning its first two matches of the season, fell to 2-1. Freshman Macie Smith scored both of the Warrior goals and now has six to lead the royal blue and white in that offensive category. Goalie Madison Miller finished with seven saves.

“The game was definitely a heartbreaker for sure,” said Warren boss Andy Pinkerton. “I mean, we were able to equalize with two or three minutes remaining to go in the game. Then, we gave up a goal in the final 10 seconds. It’s a tough one. But our girls learned a lot, I think. We played very well throughout.”

Warren got on the board early in the second minute of play when Smith got a good look on goal and drilled the ball past Rinehart.

Brooke Holdren got an assist on the score.

“We created a lot of opportunities and maintained a lot of possession in the beginning,” Pinkerton said. “And then I think the heat started getting to us. It’s hard to train for the weather like that.”

About five minutes after Warren’s goal, a Williamstown player was fouled in the penalty box. But on the ensuing PK attempt by Chambers, Miller made the save to preserve the Warriors’ 1-0 advantage.

But, during the 28th minute, Williamstown went on the attack, and Katie Pickering crossed the ball from the left wing into the box to McMullen, who used her body to re-direct the ball past Miller and into the back of the net.

“I had an amazing cross from an outside wing,” McMullen said. “She just placed it right there in front of me and I just got a body on it.”

In the second half, Williamstown took its first lead of the match, 2-1, when Berman beat Miller with a hard shot with 13:03 left. Eliza Newton got the assist.

But Warren was not to be denied and with 3:29 remaining, Smith blasted home the equalizer. Jaelyn Ludwig got the assist.

“Macie’s very accurate with her shot,” Pinkerton said. “She’s going to be a good player for us.”

With time winding down, the Yellowjackets surged on goal. And, with 6.9 ticks left, Chambers was able to boot home the match winner.

“We were in there, and it kind of got to be a scramble,” Ben Rinehart said. “Not a lot of soccer going on in there, it was just a lot of scrambling. The ball came in, bounced around a little bit, and she got a body on it– and she was able to go one-on-one with the keeper. And, bless her heart, that’s the kind of shot we’ve been working on.”