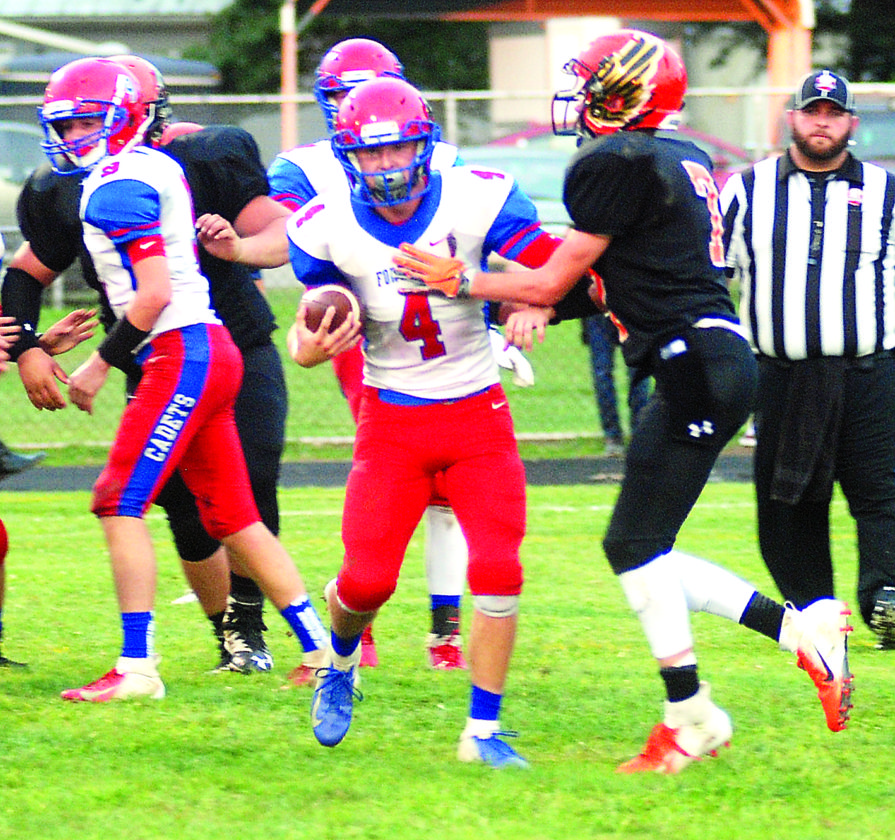 BELPRE — The Fort Frye Cadets opened the 2018 football season by scoring on their first four possessions and never looked back as they rolled to a 42-14 win over the Belpre Golden Eagles Friday night at Ralph Holder Stadium.

Senior running back Evan Schob ran for 122 yards and a pair of touchdowns while senior quarterback Tate Engle fired a pair of scoring strikes as the Cadets piled up 433 total yards.

“That’s a good Belpre team and they are going to win some football games this year,” said Fort Frye head coach Eric Huck. “To come out and execute like we did especially in the first half.. I’m pretty pleased with that.”

After forcing the Eagles into a three-and-out to open the game, the Cadets got things rolling by putting together a 55-yard, eight-play drive capped by a 16-yard Schob touchdown run and a two-point conversion by Tyler Fisher with 6:30 remaining on the clock in the first quarter.

Five minutes later the Cadets found paydirt once again as Fisher scored from a yard out to increase their lead to 14-0.

The Fort Frye defense was equally impressive as was the offense in the opening half as it limited Belpre to just 11 total yards and zero first downs in their first three possessions.

The third stop led to the third Cadet score of the half on the very first play of the second quarter when Engle connected with Fisher on a 16-yard scoring toss.

Belpre briefly moved the ball into Fort Frye territory on its next possession but its drive stalled and four plays later the Cadets increased their lead to 28-0 on Schob’s second 16-yard touchdown run of the half.

“Our line just did a great job for us tonight,” said Schob, who did all of his damage on just 12 touches. “On defense our d-line was pursuing really well and our linebackers did really well.”

Trailing by four scores at the intermission and just two points shy of a running clock it would certainly have been easy for the Golden Eagles to pack it in but that would prove to be far from the case.

The Eagles defense forced a Cadet turnover on the first play of the second half and promptly marched 46 yards on eight plays, all but one of them a run by Jessie Collins before sophomore quarterback Connor Baker hooked up with junior tight end Foster Brand on a four-yard touchdown on a fourth down play to cut the lead to 28-7.

First-year Belpre head coach Mike DeVol was quite pleased with the way his kids hung in there against the Fort.

After struggling on their next four possessions after their great start, the Cadets regrouped to push the lead back to 34-7 late in the third when Engle connected with Brady Schilling on a nine-yard touchdown pass.

Both teams scored touchdowns late in the game as Fort Frye’s Casey Brooker scored on a four-yard run and Belpre’s Logan Adams returned the ensuing kick-off 82-yards for the final score of the game.

The Cadet defense limited Belpre to just 71 total yards in the game and just 49 rushing yards on 38 carries.

“I thought our defense really stepped up and played well all night,” said Huck. “I think that is why our offense did so well early because our defense was just getting the ball right back to us.”