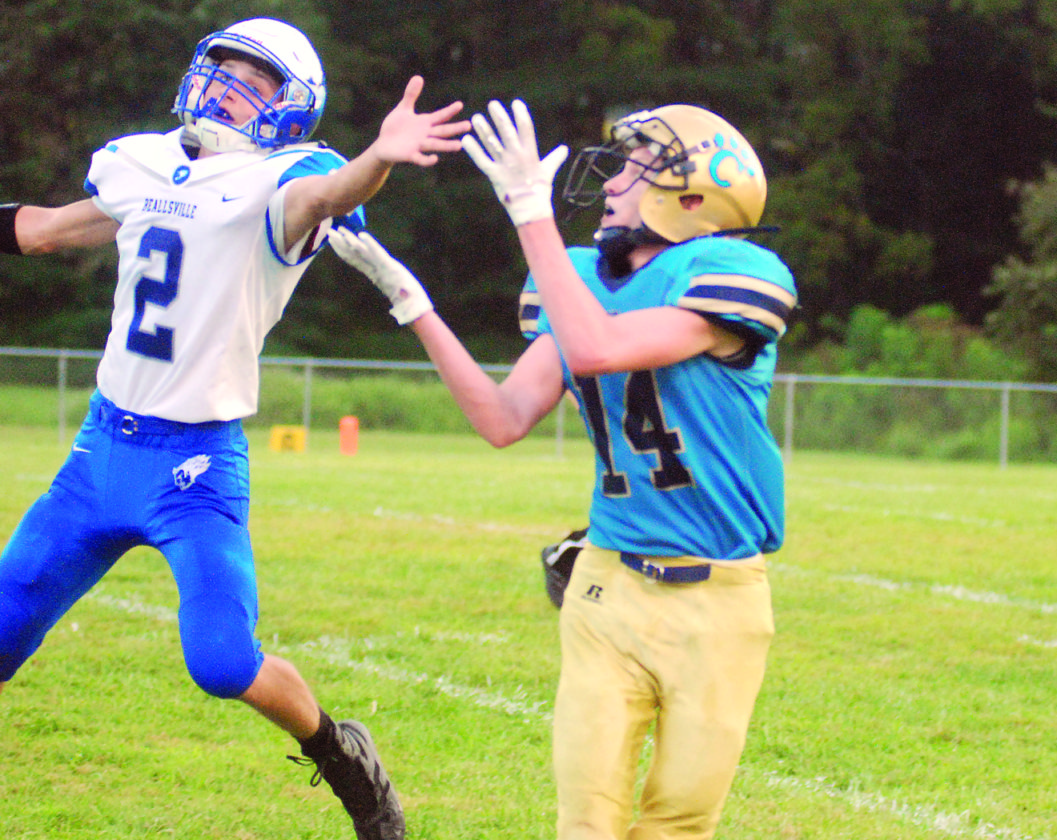 NEW MATAMORAS — Seemingly the only thing that could stop the Frontier Cougars in their home opener Friday night against Beallsville was the clock.

Frontier found the end zone on eight of their 10 possessions in the game and were only stopped as the clock expired at the end of the half and the end of the game as they rolled up 569 total yards en route to a 61-6 win to even their season mark at 1-1.

Junior tailback Joel Lewis ran for 258 yards and three touchdowns on just eight carries and a swarming Frontier defense kept the Devils off the board until the final quarter as the Cougars captured the first win of the second tenure of head coach Russ Morris.

“We had a tough opener last week with Shenandoah and it was nice to get back out here and play so well both offensively and defensively,” said Morris, who notched his first win as Cougar head coach since 2004. “We went through a little bit of a tough stretch there in the first quarter but I thought once our kids got their minds right they just kind of exploded.”

Frontier set the tone on the first two series of the game as they forced Beallsville into a three-and-out and then quickly got on the board when Lewis took the first snap from scrimmage and rambled 70 yards for a touchdown. 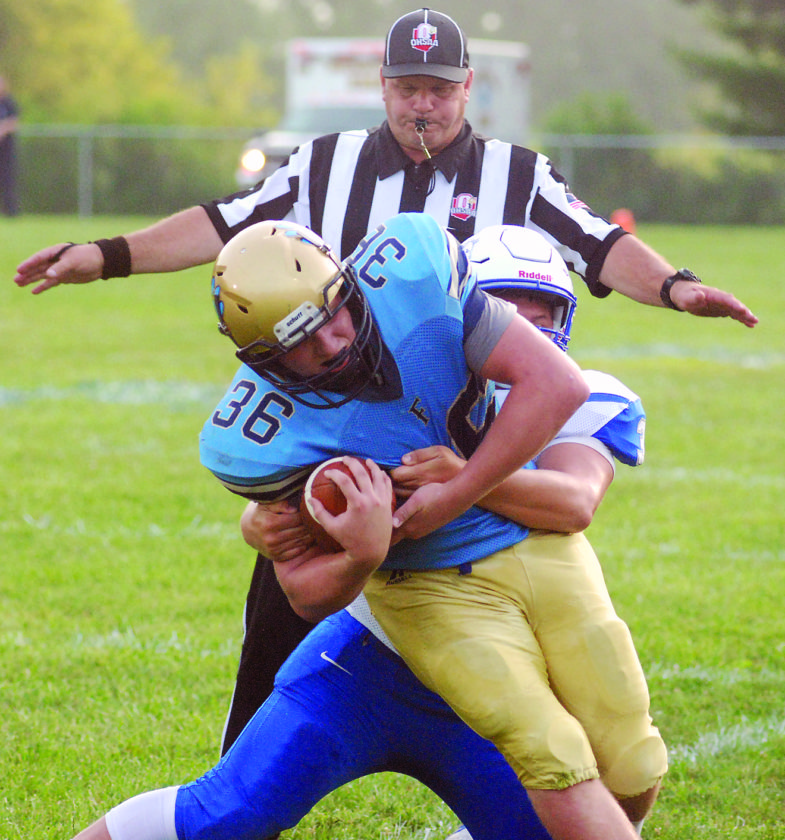 “It’s all about teamwork and our line has been working really hard in practice and it really showed up today,” said Lewis. “It’s always important to get on the board and kind of make a statement early on and we did that tonight.”

The defense actually drove the Devils backward on their next possession and the Cougars promptly drove 58 yards on 10 plays with junior Eli Fickiesen capping the drive with a seven- yard scoring plunge.

Beallsville managed to move the ball into Frontier territory but the Cougars came up with a turnover as Matt Lang picked off a Dakota Phillips pass to give the ball back to the productive Cougar offense.

Frontier quickly moved the ball back into Beallsville territory and junior quarterback Lane Snyder connected with Kalyb McQueary on a 47-yard scoring strike to push the lead to 21-0.

Snyder felt that the success of the Cougar running game early on opened things up for their passing game.

After yet another quick stop returned the ball back to the Vegas blue and gold, Lewis broke free for his second long run of the game, this one an 80-yard sprint and the rout was on.

The Cougars added two more scores before the end of the half on a 37- yard pass from Snyder to Logan Brookover and a 15-yard run by Noah Barnhart to take a commanding 41-0 lead into the intermission.

Lewis opened the second half the way he did the first as he raced 68 yards for another score on the first play from scrimmage allowing Morris to get plenty of playing time the rest of the way for his younger players.

Lang intercepted Phillips for a second time and returned it 47 yards for a touchdown while freshman Tanner Bills scored his first varsity touchdown on a 14-yard run in the fourth quarter to cap a huge offensive output for Frontier.

Bills carried the ball six times in the second half for 66 yards while Fickiesen finished the game with 53 yards on just six touches as Frontier piled up 427 rushing yards.

The only negative in the game for Frontier was the fact that they committed eight penalties for 100 yards, 13 more yards than the total they allowed Beallsville (87) in the entire contest.

The Devils avoided being blanked in the final period when Phillips connected with James Schnegg on a 53- yard scoring toss.

With their first win out of the way, the young Cougars will look to make it two in a row next Friday when they travel to Ellenboro to take on a Ritchie County team that they beat a season ago.

“I think we are improving every week and our kids are working so hard in practice,” said Morris. “There are always things that we need to address and try to get better at but as long as we are willing to work like we have been we are going to win some football games.”