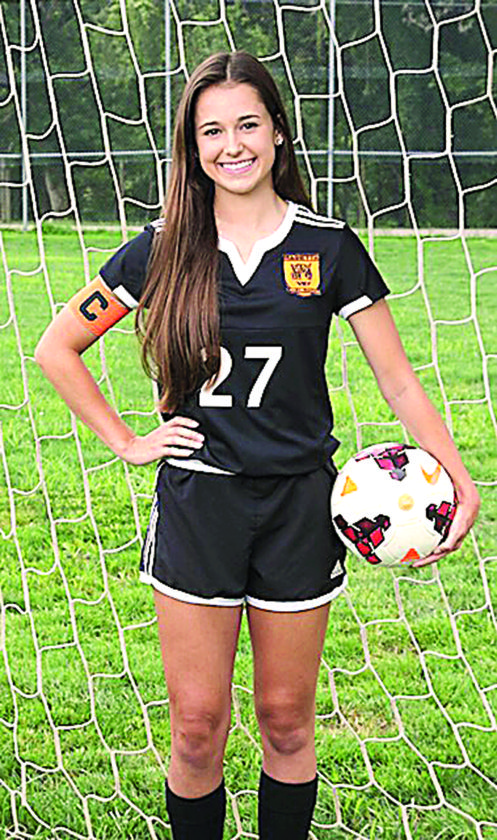 Question: Were you surprised when you were honored as the Marietta girls’ soccer program’s all-time leading scorer at last week’s game against Alexander? What was going through your mind at the time?

Answer: Yes, I was extremely surprised! I did not even know what the previous record was, yet alone if I was close to breaking it. Honestly, all I could think about prior to receiving the recognition was how confused I was about being called to the center of the field after the game. After it was announced that I had broken the record, I was really surprised. All of my friends and family who were in the stands came out to hug and congratulate me. And of course, my teammates were all there and excited for me as well. There is no way I could have broken that record without such a great team beside me.

Q: When did you start playing soccer, and what or who got you interested in the sport?

A: I started playing soccer as early as I could, at three years old. My parents were both involved in sports throughout their life, so they decided to sign me up for YMCA Kiddy Kickers to get me involved in a sport immediately. I have just stuck with soccer ever since, even after experimenting with several other sports along the way, while still playing soccer. I started playing club soccer on an all boys team at eight years old, which was compiled of a majority of the current MHS boys’ team lineup. I then continued with club soccer with my dad as my coach – of a now all girls team – all the way up until current day. Something about soccer has just always felt right.

Q: Do you have a favorite soccer player or athlete and why?

A: My favorite athletes are Tobin Heath and Alex Morgan. They both play for the US Women’s National team, and have played a huge part in inspiring my love for the sport. I grew up at the perfect time to witness the national team thrive and improve. I remember attentively watching my favorite players’ every move during games at a young age. I would never miss a game and I always had my Alex Morgan jersey and pre-wrap on.

Q: Do you remember your first varsity match as a freshman at Warren? (I do. Raeli Barnes was on Warren’s side.) That’s when all the goal-scoring started?

A: I remember that game very well. The thing I remember most was that I wasn’t nervous for my first game at all. I have always prided myself in my ability to stay calm and collected on the field, and I think my performance reflects this, in that game especially. To score the winning header goal and have such a big impact in my opening varsity game as a freshman was just an unbelievable feeling. I still remember my dad screaming for me and my entire team hugging me. It is still one of my favorite games to date.

Q: As a striker, you’ve been blessed with speed. How fast are you? (Don’t be modest.)

A: I’m pretty fast. It’s one of my strongest assets on the field, and I’m glad that I was born with natural speed that I have been able to enhance over the years. I have learned to mesh my soccer skills with my speed to further improve my level of play.

Q: Soccer can be very physical, and you’re usually marked pretty closely by opponents. Do you work out in the weight room?

A: Yes, I’m constantly working to improve my strength at home and in the weight room. I have been pretty tiny my entire life, and my strength has never been an asset on the field. I have been working very hard on changing that, especially in the off season. As a result, I can say that I have definitely gotten much stronger over the last two years.

Q: You’ve been pretty durable on the pitch. I don’t think you’ve had any major injuries, have you?

A: I have definitely had my fair share of bumps and bruises along the way, but I have been pretty fortunate to not have many serious injuries.

Q: During your career, you’ve had several highlight matches on the pitch. Name one that stands out in your mind?

A: One match that will always stand out in my mind is the Newark game my junior year. Our team went into that game with the knowledge that they had just beaten us 6-0 the previous year. We came out strong immediately, and I feel like we surprised Newark with how much we had improved from the previous year. We ended up winning the game 4-1 and I had a hat trick and an assist. It was just one of those games where everybody was in a great mood because we knew we had just beaten a very strong team.

Q: You’re on a pretty good team. How far can Marietta advance in the postseason tournament this fall?

A: I think we can win another sectional championship, and hopefully go even farther. I have a lot of faith in my team.

A: There are way too many to share, but I think my entire team can agree on our favorite. Last year on our way to our sectional championship game against Lake, we were driving through a rainstorm on the interstate when the windshield wiper flew off of our bus. Obviously, we had to pull over because it was raining so hard and the bus driver couldn’t see anything. We called to have a replacement brought to the bus, but Jeff had another idea in mind and didn’t want to wait. Jeff ran down the interstate almost half a mile in the pouring rain in an attempt to retrieve the windshield wiper. He did end up finding it, but right as he was about to run in the road to grab it, a car ran it over. Our entire team could not believe it when we saw Jeff walking back with the broken windshield wiper in his hands. It’s still one of our favorite team memories.

Q: What’s it like to play for Coach Jeff Price?

A: There’s never a dull moment.

Q: Did you consider any other college besides West Liberty?

A: Yes, I considered and practiced with several other schools. Ohio University, Ohio Dominican, Walsh, and Rio Grande are a few that come to mind.

Q: You ran track at least one year at MHS. Why did you stop?

A: I ran track my eighth grade year and my freshman year. I stopped my sophomore year so I could dedicate as much time as possible in the weight room with my soccer team to work on building my strength. I have always known soccer was something I wanted to continue with, and I do not regret my decision to spend more time training in the off-season instead of running track. My junior year I really wanted to run track again, but I was unable to. At the time track season was about to start, I was practicing with several college teams and in the process of being recruited. I was not allowed to participate in a school affiliated spring sport, or I would be ineligible to practice with college soccer teams. So again, I had to choose soccer over track. But my senior track season is coming up, so don’t be too surprised if you end up seeing me in track spikes again.

Q: Who has inspired you or impacted your career as a soccer player?

A: The people who have impacted my career the most is my family. My dad has coached me from my first Kiddy Kicker team at the age of three, until now on my club team, at seventeen years old. He has sacrificed so much to help me improve in this sport. My mom has put up with my sister and I always playing around with a soccer ball inside the house – even when we have broke a few things. My mom, grandparents, and entire extended family provide so much support for my soccer career. Any game they can be present for, they are. My extended family lives all over the country, and they are constantly following my current season and congratulating me on my accomplishments. My family is such a positive support system in my soccer career, which is why they have definitely had the biggest impact on me as a soccer player.

Q: What does Lexie Mullen do off the pitch? Any hobbies?

A: I love spending time with my friends, outdoor activities, and reading.

Q: Tell me something about yourself that nobody else knows? (For example, do you play any musical instrument or sing or ride horses or a motorcycle, etc.)

A: I actually learned how to surf about four years ago, and I’m not too terrible at it.

Q: You’re in your senior year….any concluding thoughts? (For example, are you planning to go to Myrtle Beach after graduation?)

A: I’m planning on taking a huge family vacation after graduation to the Outer Banks, which I’m super excited for. Aside from the soccer field, the beach is definitely my happy place. Afterwards, I will be preparing to make the transition to collegiate soccer.