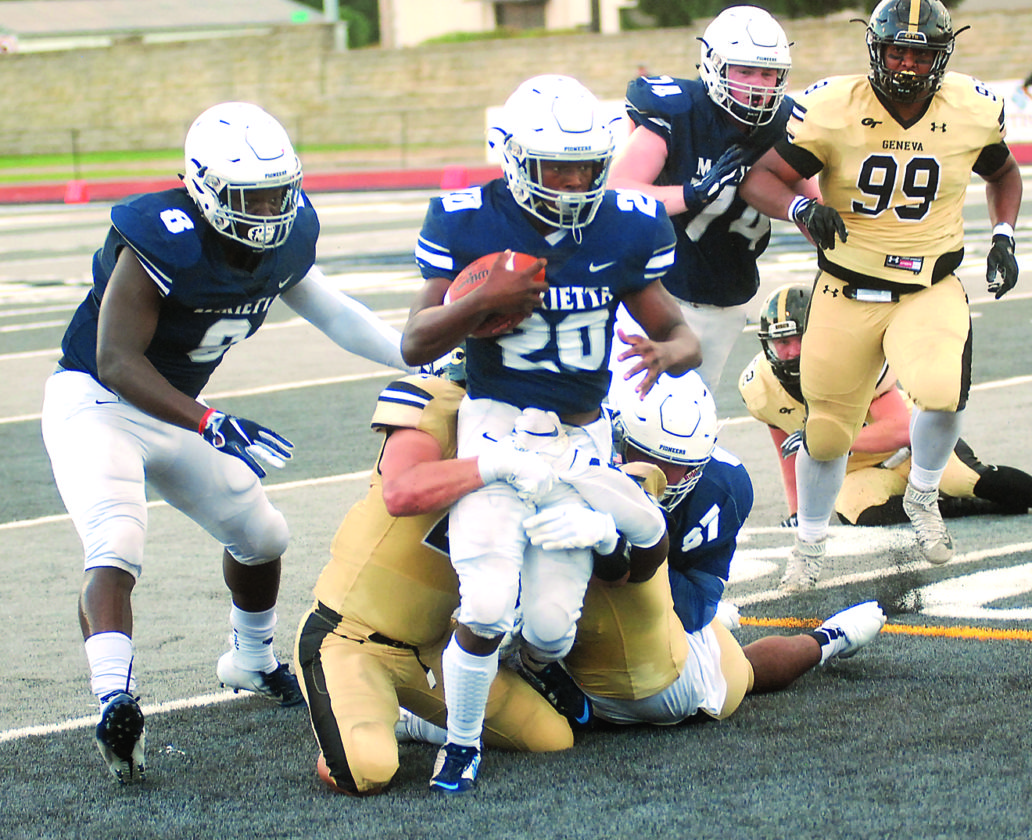 JORDAN HOLLAND The Marietta Times Marietta College’s Justin Bell (20) carries the ball as teammate Bobby Cashaw (8) looks for someone to block during a game against Geneva at Don Drumm Stadium.

Through two games this season, Marietta College junior running back Tanner Clark has 439 yards and eight touchdowns on 53 carries.

Clark’s ability to slash through opposing defenses has helped the Pioneers get off to a 2-0 start going into this week’s rivalry matchup against Muskingum. Kickoff is scheduled for 1 p.m. in New Concord.

“We’ve struggled when we have gone to Muskingum so hopefully we put that behind us,” Marietta College head coach Andy Waddle said after last week’s wild 51-50 win over Capital. “Muskie is always going to be a physical smash mouth game and our guys will have to show up and play. If we are going to win that game we need to execute at a high level and correct some of the mistakes we had on defense this week.”

The Capital game showed Marietta has some work to do in certain areas. However, it also showed the Pioneers’ ground game is no joke.

Behind an offensive line that started Caleb Riggleman, Patrick Taylor, Brendan Mullholland, Payton Henderson and Michael Sturgill from left to right, Clark racked up 358 total yards and six touchdowns against the Crusaders. Clark read his blocks, broke tackles and blew by defenders all throughout the game. Against a Muskingum defense which has allowed 168.5 rushing yards per game, look for Marietta to call for a heavy dose of Clark again this week.

The Muskies are 1-1 this season. They beat Waynesburg 31-24 in week one before falling 42-14 at Ohio Northern last week.

Quarterback Brody Hahn leads the Muskingum offense, having thrown for 436 yards, four touchdowns and one interception. He also leads the team with 108 rushing yards and a touchdown on 16 carries.

Against Capital, Marietta surrendered 500-plus yards to QB Thomas Wibbeler and will try to keep Hahn from putting up similar numbers.

The Muskies also have running back Bernard Johnson, a Marietta High graduate. Last year Johnson totalled 150 yards and three TDs against Marietta, but has just seven touches through two games this season.