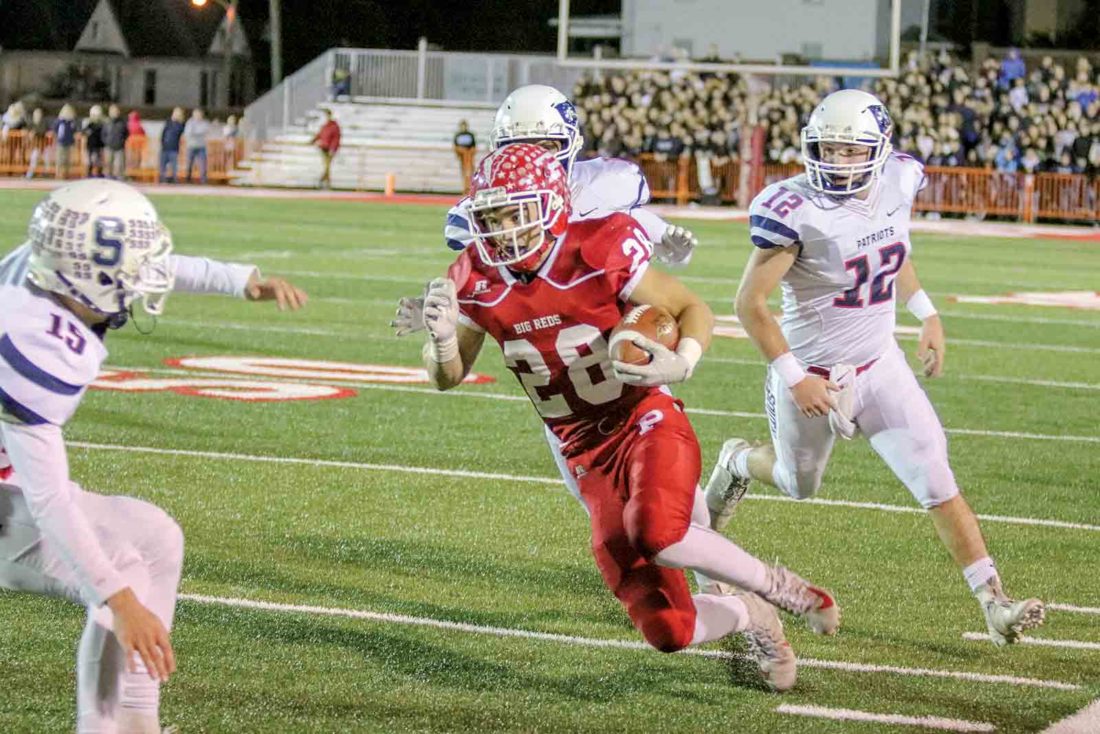 PARKERSBURG — An early Parkersburg South field goal did not a win make, as host Parkersburg High got its offense going in the second half to roar ahead 21-3 en route to a 28-10 win Friday night that nevertheless will see both the Big Reds and Patriots in the Class AAA state tournament field next weekend.

With bleachers brought in to get a bigger crowd in the annual PHS-South regular-season finale, it matched the No. 5 Patriots versus the Big Reds, tied for 10th, in what seemed like a tournament atmosphere.

South moved right down the field on the game’s initial possession to put a 3 on the scoreboard as Ben Haught drilled a field goal from 33 yards out at the 6:40 mark.

The second stanza saw the Pats again move, mostly by air and a PHS face-mask penalty, to get to the Big Red 11, then to the 1, from where South quarterback Brayden Mooney had to retreat back 25 yards to get a bad snap before completing a pass back to the 1 again, but then couldn’t score from a yard out to still be ahead only 3-0 at halftime.

PHS, meanwhile, went to more of a running attack in the second half — and it paid off. After getting to the South 3, a three-yard Shane Miller TD run up the middle and PAT by Isaac Withrow pushed the Big Reds ahead 7-3 at 5:57 of the third quarter.

The hosts grinded again on their next possession to up their margin to 14-3 at 1:32 of the third when from the South 6, QB Jake Johnson rolled right and found Brenton Strange for a short flip into the end zone for six more points at 1:32 of the third.

In the fourth frame, a 15-yard pass to Dylan Shaver set PHS up at the South 39 for an eventual one-yard plow to paydirt by Miller with 9:41 to play, hiking the Big Reds’ advantage to 21-3.

Nevertheless, South hung in there, moving downfield before Kionte Peacock intercepted in the end zone with only 5.5 seconds remaining.

“We got shut out in the first half trying to throw the ball,” said PHS head coach Mike Byus. “I’m not a smart man, but I thought we’d try running it a little bit,” and that fueled the Big Red offense to the win.

“A win in this game means a world to the kids,” said Byus. “They target this already in August; this is the game they want to win. And 6-4 sounds a lot better than 5-5.”

For South head coach Mike Eddy, “it’s been the same story for us all year,” he said. “We’re not a team that has to rely on just one guy to win a football game; we have a lot of talented young men on this team and we try to utilize all of them to the best of their talents. We gave them opportunities, but we’re not able to follow through on a lot of them. PHS, though, tonight was the better football team.”

Next game: Each team awaits playoff opponents announcement Sunday at the WVSSAC meeting