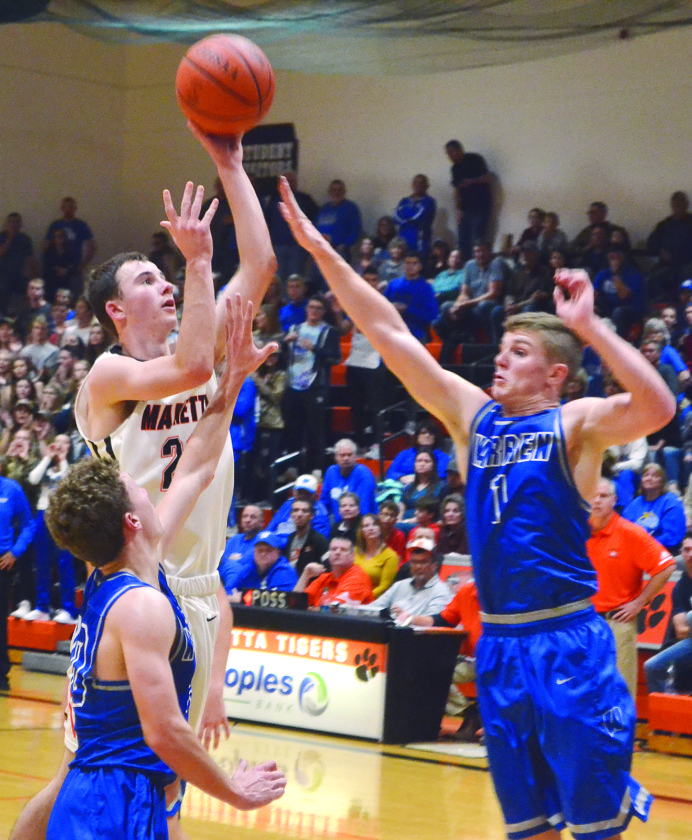 As a matter of fact, the veteran head coach in the first full season of his second tenure at MHS can tell you the exact date that the Tigers last tasted victory against Warren.

After Friday’s thrilling 72-70 win in overtime over the Warriors, Secrest and his Tigers will have a brand new date to remember going forward.

The Tigers clawed their way to a six-point halftime lead and then were able top fight off a patented Warren second-half run to claim their first win over their rival since Valentines Day way back in 2009.

“The kids played their hind ends off …We wanted to go 32 minutes hard and we ended up having to go 36 minutes and I am just extremely proud with the way the kids played, especially in the second half when they made their run,” said Secrest. “The kids really stepped up and battled.”

Marietta came out with the hot hand as they out-pointed the Warriors 18-12 in the opening period thanks in part to nine points by senior Austin Witucky.

Warren scored eight of the first 10 points of the second quarter to tie the game at 20-20 before the Tigers managed to push the lead back to six at the break thanks to an old fashioned three-point play by Witucky and a triple by Jackson Graham.

The Blane Maddox-coached Warriors are known for their ability to come out in the second half and increase the pressure defensively to force their opponents into making mistakes and once again that would be the case as they strung together an 18-6 run that had them up by six late in the third with the Tigers clearly on the ropes.

In the past the orange and black may have succumbed to that kind of pressure but a strong finish to the period kept the Tigers in the ball game.

Mark Duckworth’s runner in the lane cut the lead to four and after a pair of freebies by Joel Chevalier, the Tigers finished the quarter with a three-point play by sophomore Tony Munos and a buzzer-beating triple by Graham to close to within two (46-44) and regain some momentum heading to the final eight minutes of play.

“Jackson (Graham) hit that big three at the end of the quarter that really gave us a lift,” said Secrest. “We were struggling and got a couple of kids into foul trouble so that shot was really a big one.”

A pair of freebies by Seth Dennis gave Warren a four-point lead early in the final period and that would be the last time in regulation that either team maintained a two-possession lead.

The Tigers opened up a three-point lead with just over two minutes to play when Munos assisted junior Ryan Maddix on an outstanding reverse layup but Warren answered quickly when freshman Makiah Merritt came up with a steal at mid court and converted on the other end to close the lead back to one.

With less than a minute to play Noah Nichols brought the huge contingent of Warren fans to their feet with a three-pointer but Graham matched him with his third long-ball of the game to give MHS a 60-59 lead with just 30 seconds to play.

Nichols, who finished the game with a team-high 22 points put Warren back in front with a pair of freebies before Munos also was fouled and converted one-of two from the line to tie the game and send it into overtime.

Mark Duckworth and Brandon Simoniette traded buckets to open extended play before Munos drove strong to the bucket for an old-fashioned three point play to give Marietta the lead for good.

The sophomore guard led all scorers with 26 points in the game and made quite an impression on his head coach as well as the large Tiger crowd in attendance.

“He (Munos) is just a natural athlete and a very gifted basketball player, “ said Secrest of Munos, who also pulled down six rebounds and dished out three assists. “He can create and when it’s time for a bucket the kids know that the ball is going to be in his hands.”

The rest of the game would be decided at the free throw line as the Tigers finally managed to pull away to a five-point lead before Austin Barta closed out the scoring with a three-pointer in the closing seconds.

Joining Munos in double figures for the Tigers was Witucky with 15 and Graham with 13 off of the bench.

Dennis added 16 points for Warren while Clay Miller finished with 14 points and a game-high 14 rebounds.

“I thought we came out a little tentative in the first half but everybody kind of gathered it up and we came out stronger in the second half,” said Maddox. “They were able to score points at the end of every quarter and I think was a big thing for them.”

After a tough season a year ago Secrest felt the win was a big one for the Marietta program.

“I just can’t say enough how proud I am of the kids and how they responded,” said Secrest, whose team has a week off before traveling to Dover next Friday. “After all of this time, this win is huge.”

Warren will travel to Meigs on Tuesday before hosting Parkersburg Friday night.

Next Games: Friday, Marietta at Dover, Tuesday, Warren at Meigs.