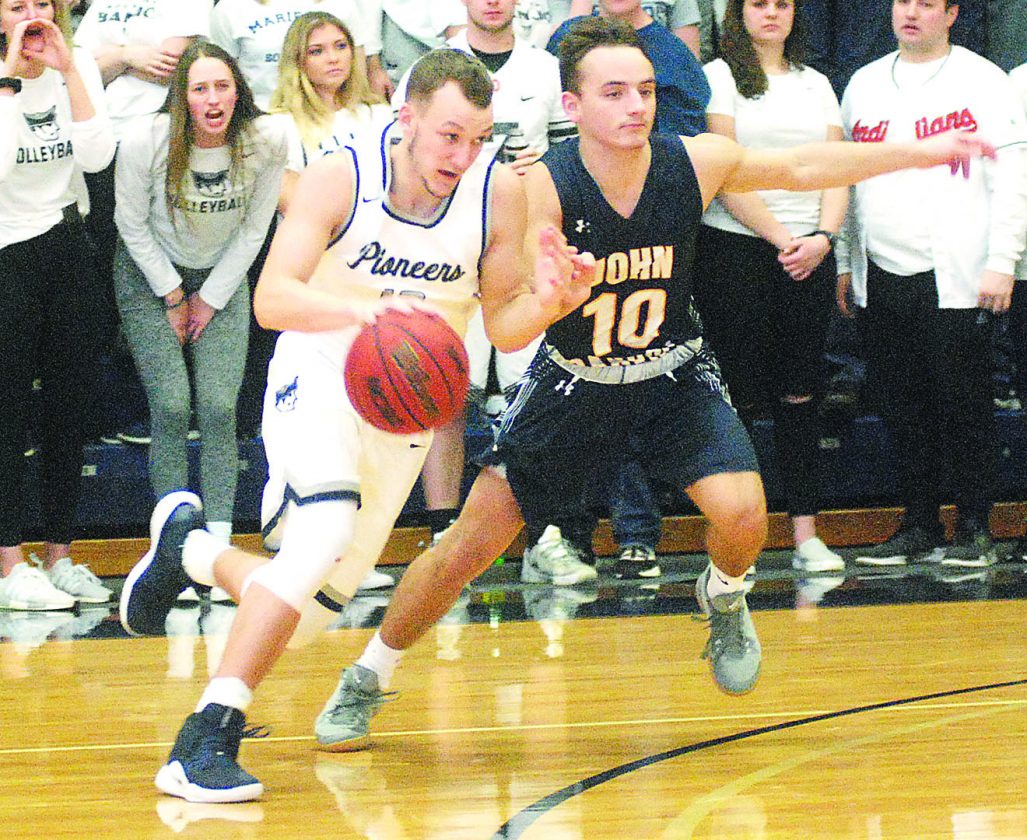 For the fifth straight year, the Marietta College Pioneers are in the NCAA Division III Tournament.

At this point, though, the program isn’t satisfied with just making the tournament. Head coach Jon VanderWal and his players expect to do some damage, and it all starts at 8 p.m. Friday when they take on Maryville (Tenn.) at Ban Johnson Arena.

The Scots (21-7) come in winners of 14 of their last 15 games, including a USA South Tournament championship run. Led by head coach Randy Lambert, in his 39th and final season, Maryville presents an interesting matchup for the Pioneers (20-6).

Maryville is a balanced squad, with four players averaging 12 or more points per game. Calvin Songster leads with way with 15.2 points and 3.1 assists. Dante Hoppa is averaging 13 points and six rebounds per game while Colt Nokes (12.5) and Emier Brown (12.2) are also scoring threats.

“They’re a challenging group to guard,” VanderWal said. “They run all kinds of motion and screens. Songster is shooting 54 percent from 3. We’ve really got to get to him. Hoppa, he’s a good three-man, a lot like Anthony Wallace. The Bowman kid down low, he’s not very tall, but he plays bigger than he is. They’ve got some guys who can really go. We’ll have to play our best defensively.”

The Scots got off to a slow start this season. They lost their first three and were just 7-6 after 13 games. However, they got hot down the stretch when it mattered. Conversely, Marietta started the season 10-0 but went through some bumps in the road, including losing three out of four games in early February. The Pioneers still won a share of the Ohio Athletic Conference regular season title, but lost to John Carroll in the OAC Tournament quarterfinals. Marietta’s resume was strong enough to earn an at-large bid into the national tournament, and VanderWal is hopeful the week-and-a-half wait between games proves beneficial.

“We’ve had some time off,” he said. “I try not to worry about a little rust. I think it benefits us that we got to rest our legs and get some guys healthy. We’ve had time to focus on us and I think we’ve taken advantage of that.”

Marietta is led by a trio of All-OAC honorees. Wallace leads the team in scoring with 11.6 points per game, Jason Ellis adds 10.9 while Kyle Dixon is averaging 10.5. Keith Richardson has come on of late as well, notching 20 points in the Pioneers’ loss to JCU.

“We’ve got to defend,” VanderWal said of the matchup. “We’ve got to really guard, win the battle of the boards and just really execute our stuff. That’s what the NCAA Tournament is all about. Being ready to make some plays and playing with confidence.”