Cadets edged out by top-seeded Garaway in district semi 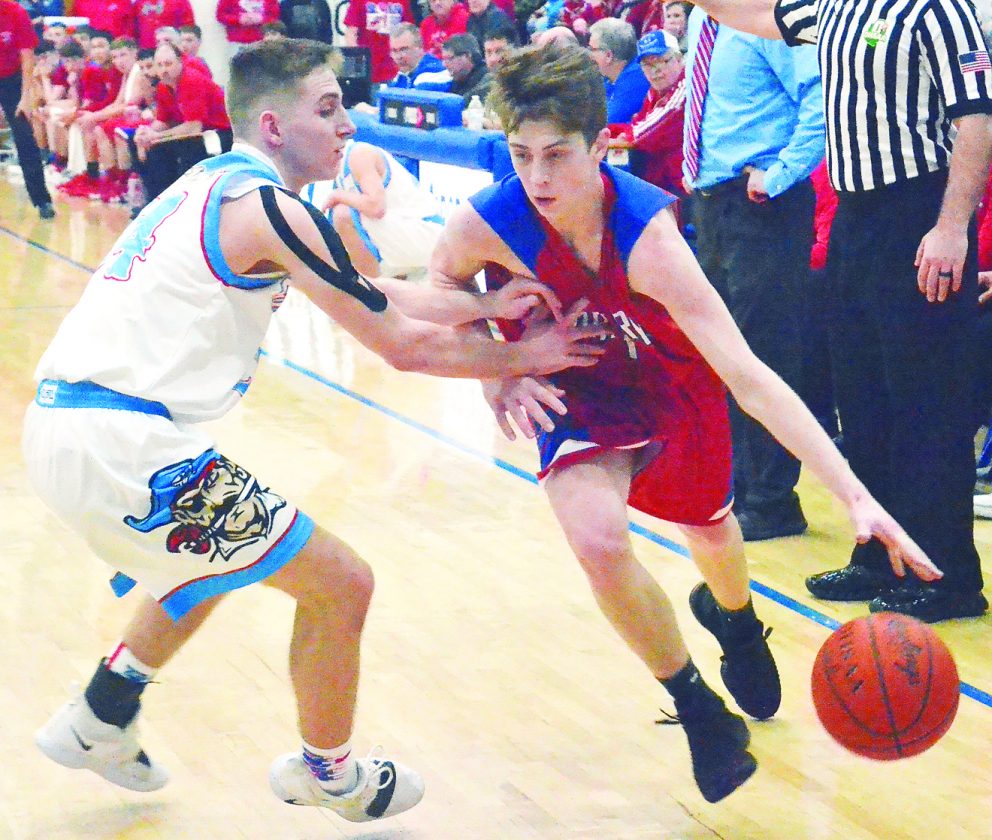 CAMBRIDGE — Fort Frye was a handful for top-seeded Sugarcreek Garaway.

But the fifth-seeded and upset-minded Cadets came up short, dropping a 55-50 decision to the Pirates Tuesday night in an OHSAA Division III boys’ basketball semifinal at Cambridge High.

“It was a really good game, and we knew coming in that it was going to come down to the end,” said FFHS head coach Eric Henniger. “You know, obviously we would’ve liked to have been on the winning side of it. But we made too many mistakes at the very end.”

“I’m going to miss my seniors,” Henniger said. “They mean a lot to us. They sacrificed a lot especially coming off the bench for us this year. I couldn’t be more proud of my seniors.”

Ethan Roden and Braden Yoder chipped in with 10 points apiece, while Erik Miller and Corey Troyer each had eight.

The Terry Rowe-coached Pirates (21-4) are scheduled to play fourth-seeded Magnolia Sandy Valley, a 48-47 overtime winner against second-seeded Meadowbrook at Indian Valley Tuesday evening, at 7 p.m. Friday at a place TBA.

After seven lead changes and two ties, Garaway staked itself to a 13-12 first-quarter advantage thanks to Yoder’s triple in the closing seconds. Greenleaf had five points in the opening stanza to pace the Cadets.

Early in the second period, Fearon drained a 3 to give Garaway a four-point cushion. But Fort battled back and regained the advantage, 17-16, on Nelson’s trey at about the midway point of the stanza. After that, the Cadets went scoreless the rest of the period, and the Pirates closed out the first half with a 9-0 run and 25-17 lead.

Sparked by Schilling’s five points and Greenleaf’s four, FFHS outpointed Garaway, 15-12, in the third quarter, and only trailed by five (37-32) going into the fourth quarter.

Fort Frye stayed close to Garaway the entire final period, and with about 34 second left in the contest cut it to one, 51-50, on Nelson’s 3.

The Cadets then got a turnover but they themselves lost the ball to the Pirates. FFHS was forced to foul, and Garaway made enough freebies (8 of 13 in the period) in the closing seconds to keep the Cadets at bay.

“We got to within one point (in the fourth quarter), got the ball, and then made a crucial mistake,” Henniger said. “And you knew that Garaway was going to make their free-throws down the stretch. We’ve just got to finish better.”

Fort Frye’s starting five were all underclassmen and are expected to return next season.

“I’ve got a good group and some good solid players coming back,” Henniger said.