Catholic cruises in first round at state tournament, 70-54 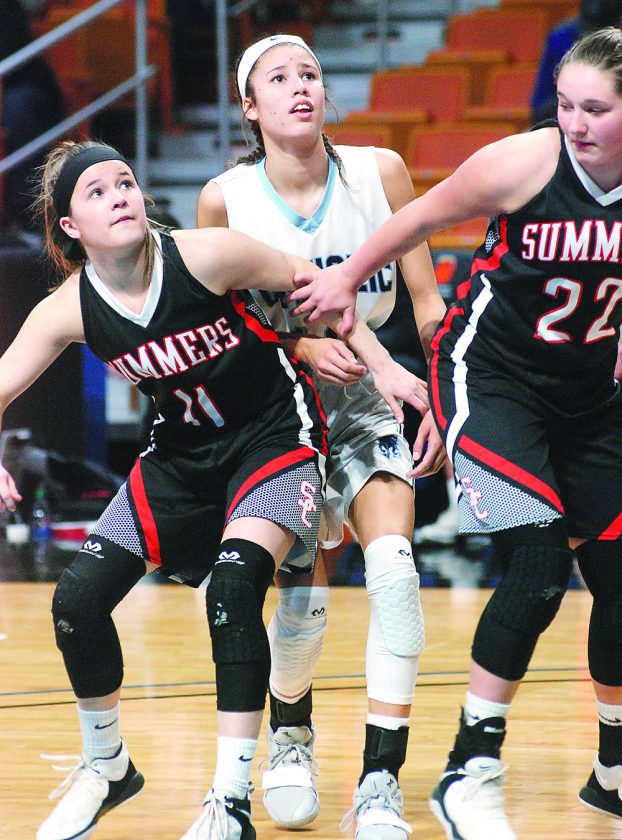 CHARLESTON, W.Va. — Parkersburg Catholic knew what to expect at the state tournament after an eye-opening experience in the first half of a Class A opening-round loss to Summers County one year ago inside the Charleston Civic Center.

The Crusaderettes’ second consecutive visit to the tournament produced different results against the Bobcats in the rematch on Wednesday.

Aaliyah Brunny did a little bit of everything for her head coach. The Crusaderettes’ sophomore forward scored 20 points, assisted on five baskets, grabbed 10 boards, swiped seven steals and blocked four shots. Her takeaways equaled one-fifth of the total 35 in the ball game against a pair of Bobcats guards in Taylor Isaac and Gavin Pivont.

“She is just gifted. God blessed her with amazing athleticism but also with a sense of humility. She did not come into our program acting like she knew it all. When you have that kind of humility you have it made as a coach. Aaliyah can just hurt you in so many different ways. She is so disruptive and offensively she just creates a lot of things.”

Running mate Madeline Huffman added 27 points on 10 of 15 shooting including 4 of 7 from deep. She added five rebounds, two assists and three steals.

Pivont and Isaac led the way for Summers. The Bobcat pair combined for 38 points, but also had 27 turnovers. Catholic’s pressure simply wore down the orange and black ball handlers.

“We knew coming into this basketball game Parkersburg Catholic’s pressure was outstanding and we saw that today,” said SCHS head coach Chad Meador. “We had trouble getting the ball up the floor. Hats off to Catholic for coming up with an outstanding game plan.”

Catholic now advances to face Trinity in a 9:30 a.m. semifinal on Friday. Mike Baldy’s Warriors handed PC its only loss of the campaign.

“First of all, we are absolutely thrilled to be alive and have advanced to Friday,” said Vierheller in his opening statement to the media. “I give Summers County a ton of credit. Summers does a fantastic job. They certainly lost a quality player and a 1,000 point scorer and they are a different team then they were last year but they play with the same heart. We knew coming in we had a tough challenge especially as good as their guard play is. Summers is very unselfish and they are well prepared.”

Space could not be created by either team in the early going. Four points was the largest lead for either group. Erica Merrill’s layup off of a Brunny turnover gave the Bobcats their margin, 13-9, with 3:31 left in the first. Catholic then scored eight straight markers to lead 17-13 before Pivont’s jumper with 34 seconds remaining set the score after one. Both teams held the advantage three times with a trio of ties.

“Our game plan in the first few minutes was to match that energy,” said Meador. “But Madeline Huffman is just a machine and she and Brunny lead their team.”

Jumpers from Huffman and Brunny along with a layup from the latter began the pull-away after halftime. Isaac’s momentum-building 3 seven seconds into the third quarter was immediately erased by a 10-4 Crusaderette run. Paige Stotts’ layup with 1:52 left in the game then gave Catholic a 20-point lead.

“I think we just kind of got our feet under us and got the jitters out,” said Huffman on what changed in her team after the first quarter. “We realized what we came here to do and started executing the game plan better. Then we just kept going from there.”