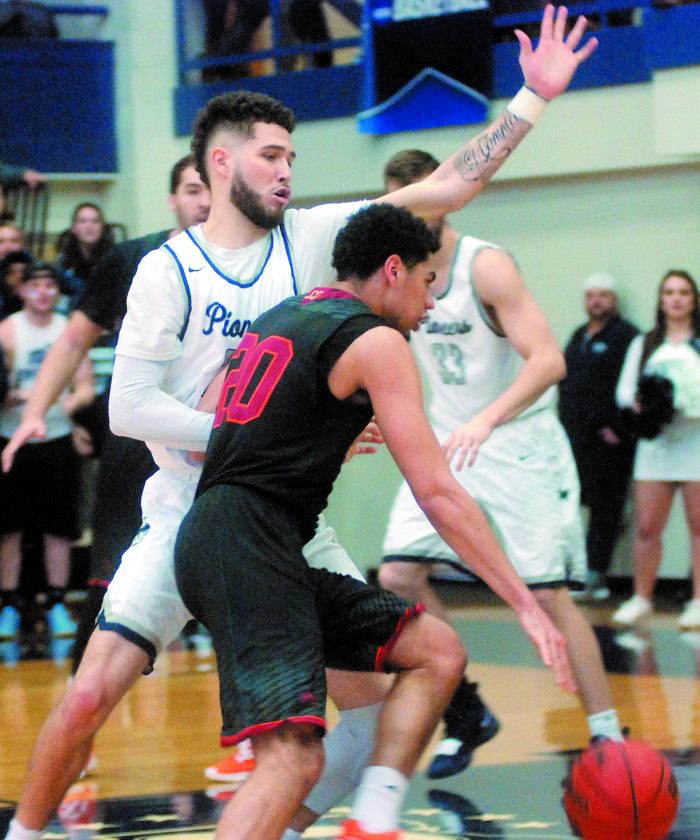 Playing in their first game in 10 days, any thoughts of the Marietta College Pioneers being rusty were put to rest quickly.

Marietta came out of the gates fast in Friday’s NCAA Tournament first round game against Maryville at Ban Johnson Arena, building an early lead and never looking back in a 101-77 victory.

“I was just trying to do my best coming off the bench,” said Matoszkia, who’s been in and out of Marietta’s rotation this season. “It’s been hard because the past eight games or so I haven’t been able to play because of matchup problems. I just try and do my best. Our guards use their shot fakes and ball fakes really well and I was able to get open looks, use good moves and score the basket.”

Added Marietta head coach Jon VanderWal, “Kyle was a perfect example of what can happen if you just stay positive, stay the course and keep working. He’s been in a tough situation. When we go small some games he doesn’t play. We wanted to get him on the floor today and I’m glad we did.”

Maryville’s Dante Hoppa scored a game-high 30 points and was 15 for 17 from the free-throw line. Calvin Songster and Emier Bowman added 14 points each for the Scots, who finished their season 21-8.

The Pioneers, who play host to Arcadia at 7 p.m. Saturday in the second round, are now 21-6.

“I guess the layoff was OK for this team,” VanderWal said. “Usually with a week-and-a-half off, you worry about too much time between games. But this team needed to figure some things out, get some rest, focus on us.

“It took us two or three days to recover from the John Carroll loss (in the OAC Tournament quarterfinals). The guys took it hard. But once the selection show came, to have our name called really helped us turn the page.”

A hot start by the Pioneers put the game out of reach early.

Maryville got a slam dunk from Bowman in transition before the Pioneers went on a 15-0 run. Lukas Isaly, who matched Matoszkia with a team-high 14 points, hit back-to-back 3s to kick off the surge. Kreeger had consecutive buckets, Shuler knocked down a triple and Mike Hall scored inside to make it 36-12 with 7:26 left in the half.

Marietta stretched its lead to 25, 48-23, when Kreeger hit two baskets in a row with 1:37 remaining. A basket by Nick Clifton and a jumper by Songster helped cut it to 51-30 at halftime.

Maryville gained some momentum and got within 18, 73-55, on Hoppa’s 3 with 11:25 on the clock. Emmanuelle Garcia then came up with a steal and had a wide open layup in transition, but his attempt was too strong and Marietta answered with a trifecta by Hoyng to go back up 21.

“Two statistics are glaring,” lamented Maryville head coach Randy Lambert, who coached his final career game after 39 years. “Rebounding — I don’t know if I’ve ever had a team get outrebounded by 25 (52-27). That’s amazing. I knew (Marietta’s) depth would be an issue, but a 44-point (bench) difference? That’s strong. They’d been out of sync for the last week or two, but they showed up tonight.”

The Pios were smart with the ball early which allowed them to build the early cushion. Marietta did not turn the ball over until there was 1:55 left in the first half.

“During games likes this, the ball is so important,” said Isaly, a freshman point guard.

“Coach preaches we have to take care of the ball. You can’t score and make plays if you don’t have the ball. We were able to handle the ball well as a team tonight.”

Marietta scored 42 of its points in the paint compared to 24 for Maryville.

“We knew we had a size advantage,” VanderWal said. “We told our guys to have a post presence. That was definitely part of the gameplan.”