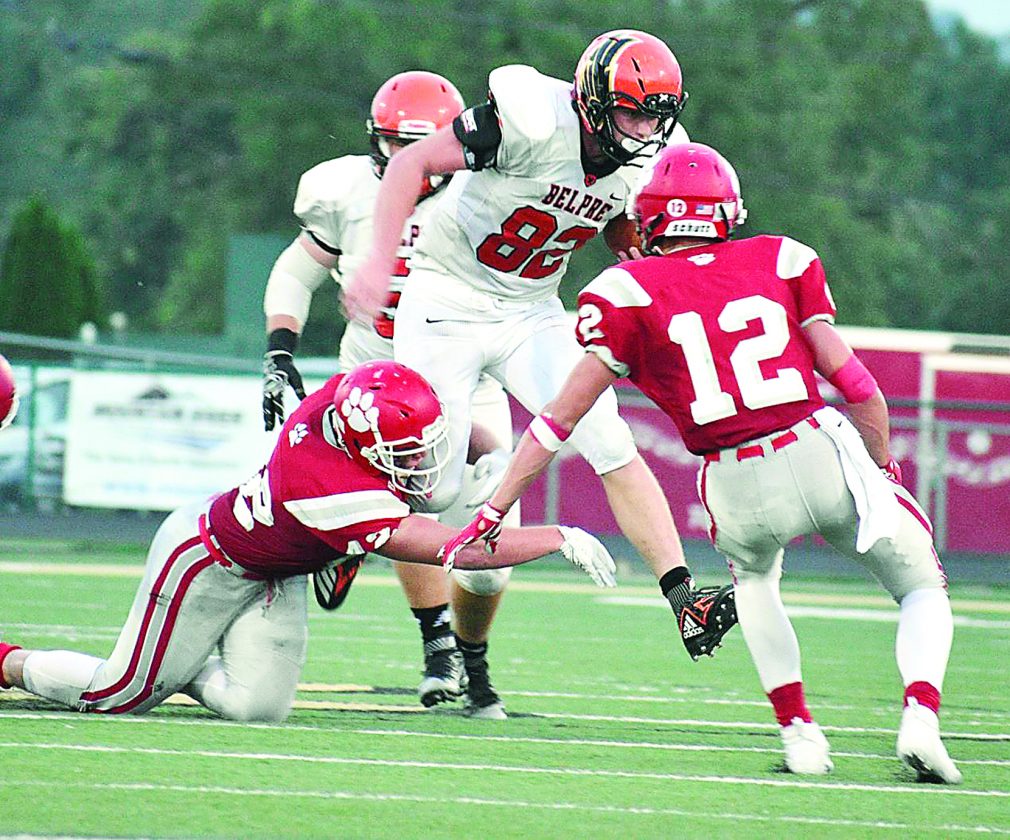 Question: I have to believe football is your favorite sport?

Answer: (Laughs) It is, but I can see where some people might think it’s baseball.

Q: How long have you been playing football and baseball.

A: I started when I was about 6- or 7-years-old. My dad coached me up until junior high. In baseball, I didn’t play tee ball.

Q: In football, you didn’t start out as a running back, did you?

A: I was a tight end on offense, and didn’t run the ball until I was a senior?

Q: Were you kind of surprised to be moved to running back?

Q: You had a pretty amazing season, rushing for over 1,000 yards (1,689). I betcha the team was disappointed that it didn’t make the playoffs?

A: We were. But, you know, we would’ve made it in Division VII. But I think we were two kids over, and we were in Division VI. Still, there were a couple of games during the season that we probably should’ve won.

Q: After the season, you earned all-state status. That had to have been exciting?

A: That was my goal.

A: I set the single-game rushing mark (348) against Wahama. But the game that gave me a lot of satisfaction was against Southern, a pretty good team. I think I had four touchdowns in that game, and we won it.

Q: You played on both sides of the football?

A: I did. I also played on special teams. I was a defensive end or linebacker. After playing against teams like Fort Frye, Trimble, and Waterford, I was dead tired.

Q: Next season, you’ll be playing at West Liberty University. Where will you be positioned?

A: You know, they asked me where I’d like to play, and I think I’m going to line up in the backfield as a halfback — and run the ball and catch passes. They have a spring game (April 20), and I’m going up there to watch that and meet some of my teammates.

Q: Do you have a favorite football team?

A: Well, I root for the Buckeyes, but I’m not a diehard fan of them.

In the NFL, my favorite team is the Dallas Cowboys. If you saw my bedroom, you’d realize that.

Q: Do you have a favorite Cowboy?

A; Tight end Jason Witten. That’s why I wear number 82. He’s so reliable.

Q: How about baseball? Do you have a favorite team?

A: (Laughs) My mom likes the Indians, but I’m a New York Yankees fan. I’m hoping to go to New York and see them play someday.

A: Team-wise, we made it to the district finals one year but lost to Eastern.

Then, this past week (April 17), I hit a grand slam out of a minor league ballpark (Chillicothe VA Memorial Stadium). I’ve always wanted to hit one there. But we lost to Williamstown (13-12). I’ve been really hitting the ball good lately. I mean, I had homers in three straight games.

A: It went out at 350 feet, and they found the ball another 100 feet further away. Coach (Terry) Mullen said he’d never seen a high school kid hit one out of that park. And, I just winked at him.

I also hit the wall with a double, and had a single in that game.

Q: Who has been you inspiration as a student/athlete at Belpre?

Q: What do you do off the playing fields?

A: I’ve been a Cub Scout since I was about 6 and a Boy Scout since 11 or 12. And, just recently, I became an Eagle Scout. That was pretty exciting.

Q: As a senior, is there anything you’d like to shout out?

A: Well, I’m really excited for Belpre. I think Coach DeVol is building something good, and I want to wish him and the team the very best of luck.