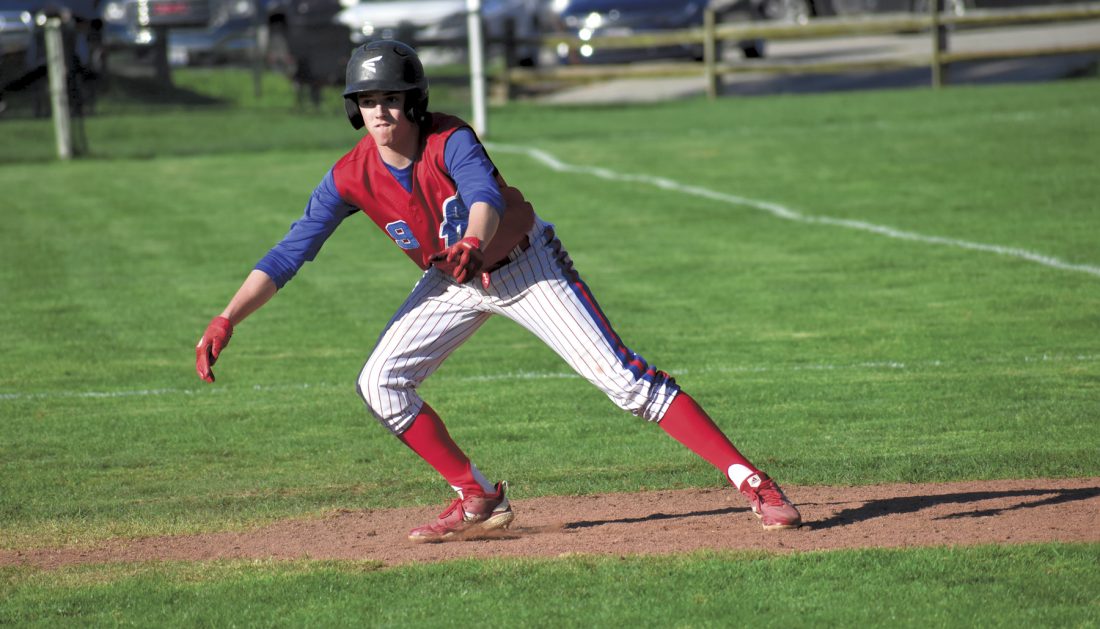 KYLE LUTZ, The Wheeling Intelligencer Fort Frye’s Brenden Huck takes a lead from first base during a teammate’s at-bat in the Cadets’ 4-1 OVAC 3A semifinal loss to Linsly Monday.

WHEELING — It all comes down to timely hits when a pitching dual takes place.

Fortunately for Linsly, it was able to come up with a few early on. Linsly scored three runs in the first three innings while Eli Petho fired a two-hitter in a 4-1 victory over Fort Frye on Monday in a OVAC 3A semifinal matchup at Holloway Field.

Linsly will face Barnesville for the 3A title on Friday.

“It was just two good pitchers going at it,” Linsly (16-4) coach Jay Cartwright said. “Both sides played defense. I was pleased with our guys at the plate. We hit situationally and put the ball in play against a really good pitcher. So it was a very good night for us. We played well, worked some deep counts and Eli was just a horse (Monday).

“It was just one of those nights where he was moving around, changing speeds and making all those pitches. That’s a good club right there. Fort Frye is always strong. We have played them in this tournament for years. It’s the kind of baseball you want to see.”

After his single, Hunter Kelley drove him in with a RBI double. Linsly followed with a couple of insurance runs in the third.

Jules Giovengo led off with a single followed by a Petho sacrifice bunt to move the runner. Kelly drove in his second run of the contest with a single. Jon Milton was then able to drive him in on a single to make it 3-0.

“That’s the name of the game,” Fort Frye (9-6) coach Rob Nelson said. “Their kid (Petho) did a really nice job and kept us off-balance. He pitched a heckuva game. It’s just a very good program and Coach Cartwright always does a really great job. We didn’t get timely hits or didn’t get very many hits at all. (Petho) kept us off-balance and that’s the name of the game right there.”

Fort Frye — the reigning 3A champion — had a couple of scoring opportunities midway through the game. Tate Engle led the fourth inning off with a single to end Petho’s no-hit bid. He was able to make it to third base, but the Linsly defense did not break. The following inning, Brenden Huck led the fifth off with a walk. However, a 6-4-3 double play after a strikeout gave Linsly all the momentum.

Petho went the distance for Linsly as he fired four strike outs in the process.

“I just trust my catcher,” Petho said. “I try to hit my spots, it doesn’t always work out, but the defense was great. I threw hits, but there were a lot of balls that could have been hits. It was good job by them.”

Luke Nelson also had a solid game on the mound for Fort Frye. Although taking the loss, he went the distance and struck out five Linsly batters.

Fort Frye put forth one final push and managed to get a run across in the seventh. Devin Layton got on base with an error, followed by a Huck walk to put two men on with no outs.

While managing to score on a groundout, Linsly ended the threat by capturing three straight outs, including a strikeout to end it.

“We just have to go back to the grind. I thought we played very well defensively,” Nelson said. “We pitched well and we’ll use this as a positive to move on and hopefully we bring our best the next couple of games and make a little run in the tournament.”

Kelley was the lone Linsly played to provide a multi-hit game with his double and single along with his two RBI. Lee Paull put Linsly’s fourth run on the board in the sixth inning with a sacrifice fly to right field.

Linsly will have a chance to secure two straight OVAC championships. Last year, it won the 2A championship with a 12-1 victory over Toronto.

However, Cartwright and Company are up for the challenge against the undefeated Shamrocks.

“We haven’t played them, so I don’t really know a lot of what they have,”Cartwright said about Barnesville. “But to win that many ballgames and not lose, they must be a solid club. We’re up to the challenge. We beat a lot of good teams, but we’re expecting a challenge. We’re expecting them to bring it. It’ll be fun Friday night up at (I-)470.”