Frontier fights for 3-2 victory over River 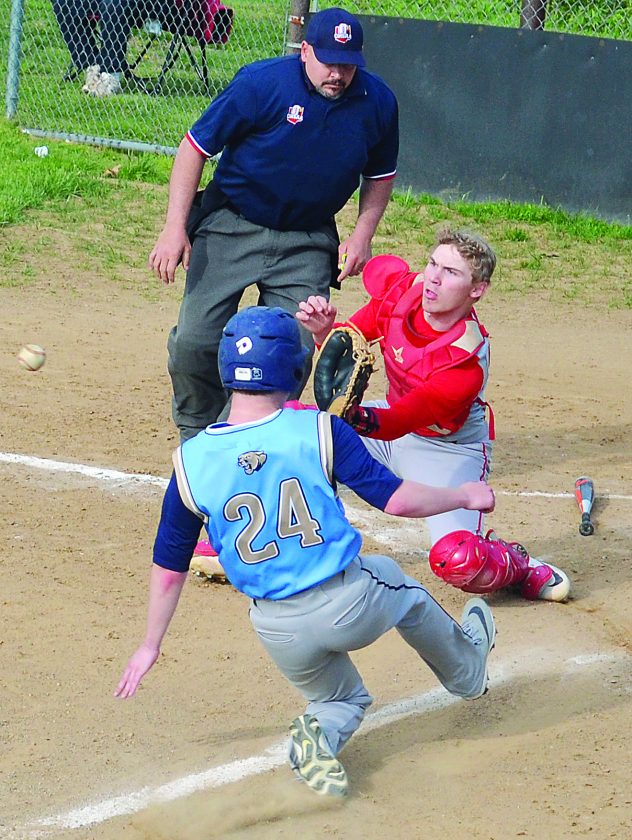 After the Cougars (7-12) scored twice from second base on two infield hits in the bottom of the sixth inning to take a one-run lead, freshman reliever J.D. Schmidt pitched out of a bases-loaded jam in the top of the seventh to seal the victory.

“We hit the ball and made them field it,” said FHS skipper Kurt Satterfield. “It’s one of our better wins, because River’s a pretty good team.”

The Pilots fell to 6-6 on the season.

“This is one game you don’t like to lose,” said RHS boss Marty Ramsay. “Frontier’s a good team, and they did what they had to whenever they needed to. They came up in the situations and we didn’t.”

The right-handed-throwing Schmidt tossed 2.1 innings of scoreless relief and got the win. Righty Reed McKinney started on the bump for the Cougars until he was chased in the top of the fifth.

“That was a good pitching duel for the first five innings,” Satterfield said.

Without hitting the ball out of the infield in the top of the fifth, River capitalized on a bunt hit, three walks, and a Cougar throwing error to plate two runs. No Pilot batter was credited with an RBI.

“Usually when we make errors like that in that inning, we go to heck,” Satterfield said. “But we stuck with it.”

In the bottom half of the frame, FHS cut it to one when Lane Snyder — who led off with a walk — legged it all the way home on Briar West’s bunt single and Lawrence’s throwing error to first on the play. West then tried to score on Jacob Gutberlet’s bunt but was thrown out at the plate by Lawrence.

After Schmidt retired the Pilots on three flyouts in the top of the sixth, Frontier went to work and staged a rally. With one out, Ayden Miller singled to center but was erased at second on Barnhart’s grounder. Barnhart, who was safe on the fielder’s choice, then advanced to second when Logan Brookover was plunked by a Lawrence pitch.

Next up, Snyder grounded the ball in the hole which the RHS shortstop fielded but his throw was late to first base. On the throw, Barnhart never stopped running and scored the equalizer. Stopping at second was Brookover.

West, the next Cougar hitter, grounded the ball up the middle, and the Pilot shortstop made a nice play in preventing the ball from going into the outfield. But he was unsuccessful in getting Snyder in a force at second. On the play, Brookover never hesitated when he rounded third and raced home with the go-ahead run.

In the top of the seventh, River loaded up the bases with two outs, and had its number 3 batter, Levi Bowers, at the plate.

Bearing down, Schmidt got Bowers to ground the ball to McKinney at short. And after McKinney fielded it, he flipped the ball to West at second base for a game-ending force play.

“J.D.’s a freshman, and he’s going to be tough,” Satterfield said. “He takes the pressure better than any freshman I’ve ever been around.”

NOTE: Frontier High sophomore catcher Noah Barnhart threw out three River baserunners at second base during the contest….The Cougars have no seniors on their roster.