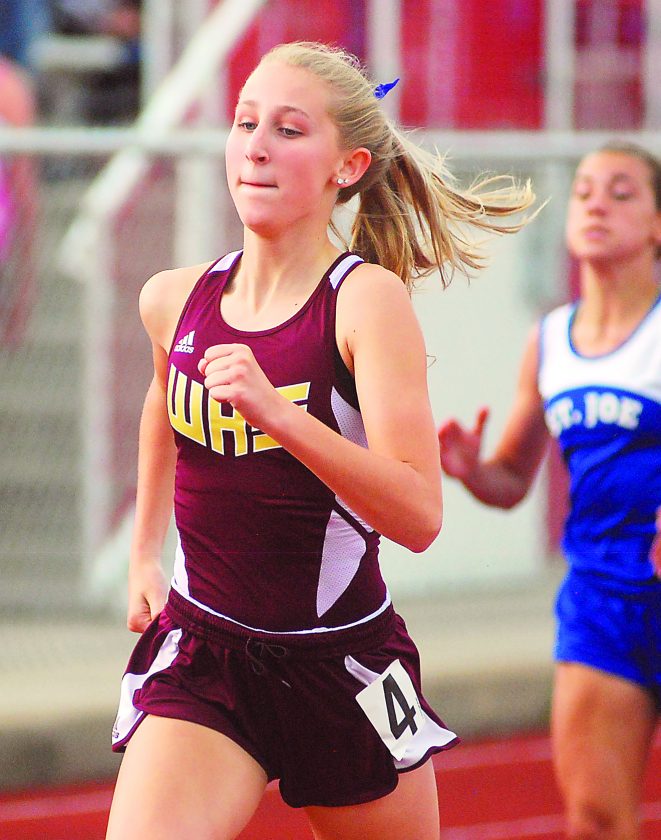 WEST UNION — The final Cline Stansberry Invitational at the old football field finished up late Friday evening and the host Doddridge County boys nipped Ritchie County (109.5 to 104.5) for the team crown while the Williamstown girls continued their dominant spring.

For the WHS girls, Lilly McMullen posted a 58.21 to win the 400. Not only did she break the 2018 Cline Stansberry Invite mark of 58.50 set by Doddridge County’s Jonna Ferrell, but the ‘Jacket also set a new school record. Andrea Chidester held the previous WHS mark with a 58.66 set in 2013.

“We just keep getting stronger. That’s a good thing. We got a couple girls who were banged up earlier in the year and they are healthy again.”

McMullen also ran a leg on the winning 4×200 team with sister Ella McMullen, Natalie Chambers and Emma Berman. The quartet posted a 1:49.93 to break the meet record of 1:51.24 set back in 2000 by Doddridge County.

“We have six or seven girls that can go under 1:05, which any team in the state would like to have that,” Hall said. “For weeks in a row it seemed like we kept finding 400 runners.

“We are going to stack our relays (on Tuesday for the Fenton Relays at Parkersburg South) and go for school records.”

WHS also had runner-up finishes from Bethany Arnold in the shot put (35-7) and Emilee Ellison in the 2-mile (13:31.27). The top local discus effort came from Williamstown’s Elizabeth Newton, who threw 98 feet to place third.

Jessy Higgins of St. Marys was runner-up in the mile after she crossed in 5:41.69.

The Bulldog quartet of Jasmine Ball, Ferrell, Jordan Vidal and Galagar also won the 4×100 by topping runner-up Williamstown, 52.58 to 53.99.

Although North Marion’s Michael Garrett finished as the high-point boy (30), there were plenty of solid efforts from the Mid-Ohio Valley as well.

Also winning events for the Bulldogs were pole vaulter Reese Burnside (13-0), who beat teammate Dawson Evans (12-0), along with Carter Lipscomb. The DCHS distance runner won the 2-mile with a time of 10:19.96 and was runner-up in the 1600 with a clocking of 4:42.56, which topped third place Spencer Corley of Tyler Consolidated.

“It was our last Cline Stansberry at the old field so it was a special meet,” said Bulldog boys head coach Bobby Burnside, who got runner-up showings from Griffin Devericks in the 110 hurdles (15.91) and the 300 hurdles (41.44).

“I don’t think any team had a perfect meet and usually you don’t, but the effort was good. They performed well. It was tough. When we started the meet it was like 85 degrees. It was really nice in the evening though and Griffin ran solid.”

Ritchie County’s Gus Morrison, who finished behind Devericks in the 110 hurdles, topped his Bulldog rival for the 300 hurdles title with a posting of 41.25.

Corley was the only boy to establish a new meet record. The Silver Knight cleared 6 feet, 6.5 inches to win the high jump and break the old mark of 6-6 set back in 2000 by North Marion’s Brandon Wiley.

Williamstown’s Kole Sutton was runner-up in the 400 (52.60) while St. Marys’ Isaak Mooney was third. Rebel Jarett Allender also finished second in the 800 with a time of 2:05.34, which was just ahead of teammate Kent Bee.