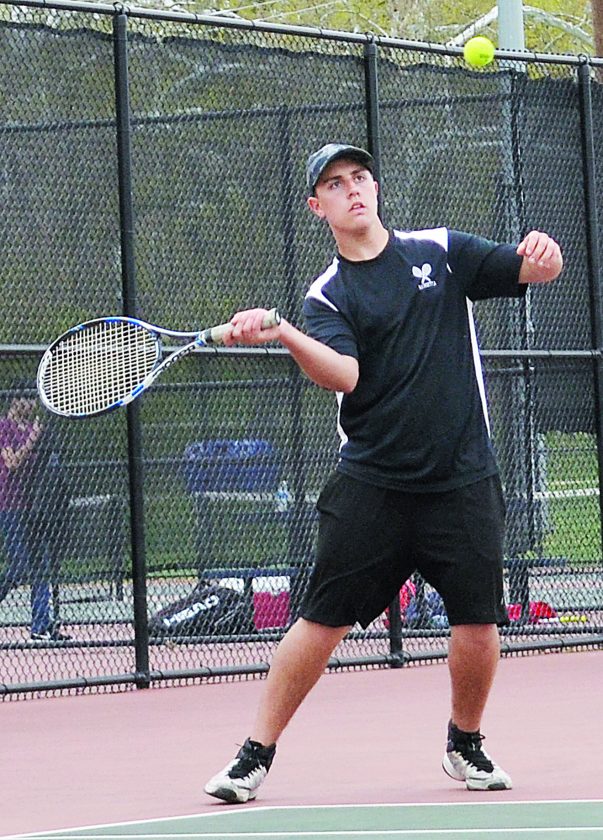 With it even at two sets apiece, the MHS first doubles team of Blake Villers and Brett Saffell jumped out to a 7-6 win in the opening game of the best-of-3. All the duo needed to do was win one more, and the Tigers would pin the Quakers with their first East Central Ohio League setback of the season.

But New Philadelphia’s Gabe Wherley and Jacob Hootman rallied and claimed the next two games, 6-2 and 6-3, to help the Quakers seal the set and match, 3-2, Wednesday evening at the Beren Tennis Center on the campus of Marietta College.

“We’ve been close, because this has been the fifth 3-2 loss that we’ve had,” said Marietta High head coach Chris Mayer. “We’re a fairly inexperienced team. The varsity is all juniors, and they’re learning to play varsity level tennis.”

“New Philadelphia’s in first place, and we were right with them,” Mayer said. “The league is very competitive. Anybody can win on any given day, and we definitely have a very good chance of winning the rest of our league matches if we play like we did today.”

“Jackson played a lot better, because he lost 6-1, 6-1 to him the first time,” said Mayer, whose Tigers dropped a 4-1 decision to the host Quakers at Tuscora Park on April 3. “He was playing much more competitively today.”

Marietta’s second doubles team of Jacob Cline and Chase Taylor were swept by NP’s Ryan Ripley and Maggie Weaver, 6-2 and 6-3.

Villers and Saffell actually had to stage a comeback in the first game.

“They were down 5-1 and fought back to win that first set,” Mayer said. “Then, I think they just ran out of gas. They got a little too tired, and weren’t able to pull it out.”