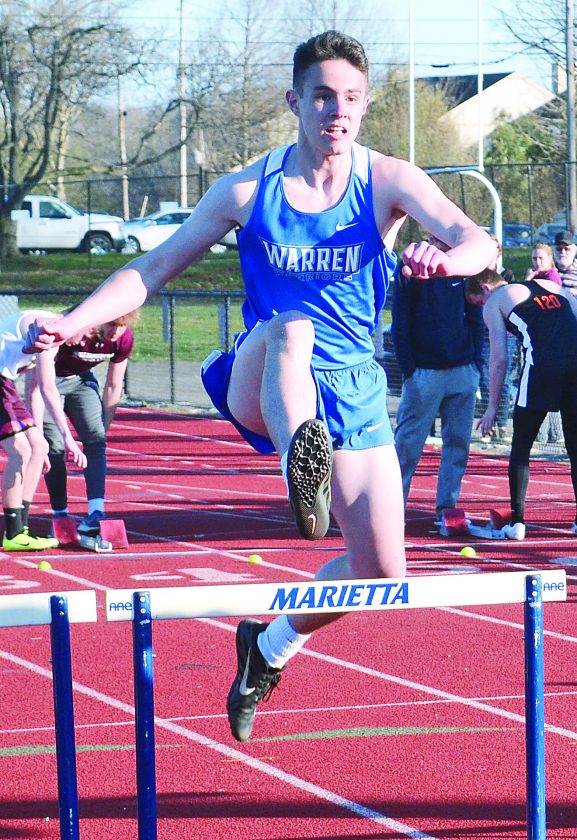 VINCENT — The Warren boys track team has lofty goals and isn’t going to shy away from them.

“We have a lot of guys that are hopefully going to qualify for state,” said Warriors head coach Tyler Schaad. “It’s a serious team effort. It’s been a really exciting year. Everything’s coming together and and everyone’s working together. It’s been fun.”

The Warren boys have won or been runner-up in every meet they’ve competed in this season, including six meet wins. The Warriors opened the season by tying a talented Logan squad at the Fairweather Relays in Vincent. A week later they were second behind Lancaster at Nelsonville-York’s Rocky Brand Invitational.

Warren edged Williamstown, 107-106, in the Marietta Night Relays before finishing second behind the Chieftains in the Logan Mingo Relays.

Since then, Warren has won four straight meets, most recently finishing tied with Parkersburg High in the Erickson Invitational Thursday at Parkersburg South.

The success for the Warriors shouldn’t surprise anyone.

Warren’s boys team placed 11th as a team at last year’s state meet after nabbing six All-Ohioans and seven state qualifiers. All seven of those athletes are back this year and doing damage every week in the Mid-Ohio Valley.

“The expectations coming in were sky high, and none of the kids have backed down from that,” said Schaad. “That’s been the talk all year — state. Our guys have worked their butts off.”

The Warriors take pride in being a Southeast Ohio school that is a legitimate contender to make noise in Division II. There’s a lot of season left, but Schaad is hoping his boys continue progressing in the right direction.

“We’re not super concerned about about winning every meet,” he said. “We’re just hoping to get better every week and get guys running top-of-the-division times.”

Warren’s 4×800 relay team poses the biggest threat to win a state title. The quartet of senior Jake Herriott, senior Trent Sayre, junior Preston Rowland-Demster and junior Ethan Yost placed second at the state meet last year, missing out on the title by .47 seconds. Those guys have been dominant so far this season, even with an injury to Rowland-Demster.

“Brennen Perdue, a freshman, has been stepping up like crazy,” Schaad said.

“We do have three or four of the best 800 runners in the state,” Schaad said, “but also, we know we need to get better. We’re not at state championship level yet and that’s where we want to be.”

Another Warren relay team, the 4×400, has yet to lose this season. Typically comprised of Sayre, Yost, junior Justin Lough and senior Isaiah Kitts, with senior Kyle Burns and others occasionally filling in, the 4×4 team made it to state last year but failed to qualify for the finals. They’re hoping for a different outcome this season.

Individually, Sayre and Lough have been tearing it up in their respective events. Sayre placed third at state in the 1600 (4:20.07) last year. He won the same event Thursday with a time of 4:24.90. Lough was fifth in the 300 hurdles (38.93) in Columbus a season ago and was on pace set a meet record in the Erickson Invite before being disqualified. Yost, an All-Ohioan in the 400 (50.03) last season, also is having a successful year so far.

“They’re far and away better than they were at this point last year,” Schaad said. “They’re setting PRs for the season every week. We’re right where we want to be right now.”

Even beyond the All-Ohio guys, Warren has a deep, talented roster. Burns and Perdue have both stepped up. Senior Landon Wigal has consistently scored in the pole vault, discus and shot put. Liam Kellar, another senior, recently set a PR in the pole vault, getting to 13-feet in Athens. Sophomore Brady Rhodes has impressed his coach in the long jump and relays.

As Schaad said, it’s been a total team effort for the Warriors so far.

However, an interesting challenge awaits the Warriors Friday when they head to New Concord for the Dan Adams Classic.

“That’s going to be a real test,” Schaad said. “We’re going to treat this week like a full week of practice. Guys are tired, sore. We’re going to take this week and get healthy, then really make a push at Dan Adams.”