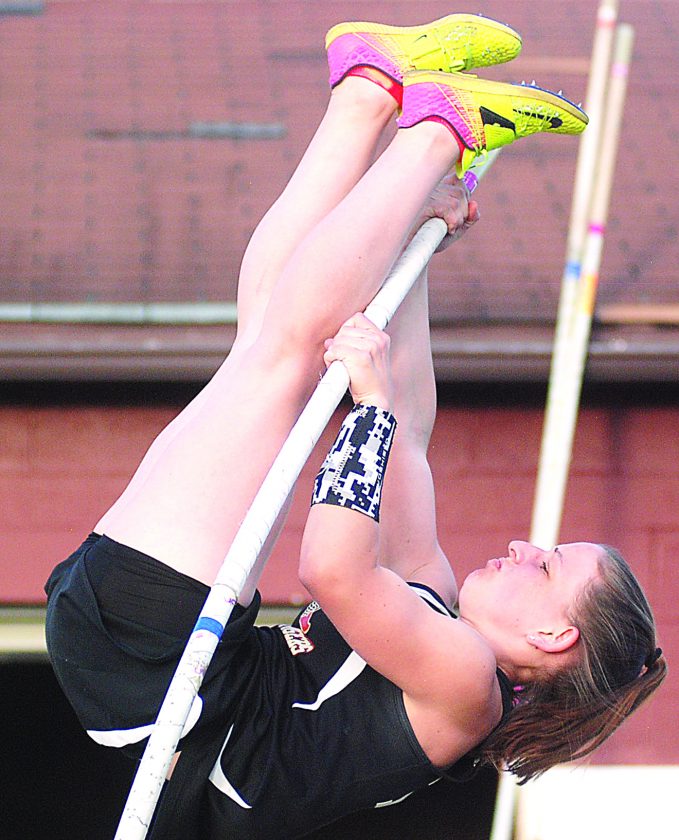 While running in the prelims of the 110 meter hurdles, the Marietta High senior track and field standout suffered a setback and was not able to advance to the finals of the event.

“She fell in the hurdles,” said MHS coach Mollie Schramm. “But she was able to come back from the fall and complete her vault. That took courage.”

Now, the Marietta College recruit, who owns the Tiger record in the PV with an effort of 11-5-1/2, is hoping to excel again in the vault at today’s scheduled 3:30 p.m. OHSAA Division I district meet at DDS on the campus of MC.

A year ago, Brown advanced to the regional competition with a vault of 10-6, good for second place. She was also third in the high jump in 4-10.

“The top 4 go to regional,” Schramm. “Everything happens at regional.”

Last spring, Brown placed seventh in the regional at Pickerington North in the PV, clearing the bar at 10-8.

The 17-year-old Brown would love nothing better than to cap her Tiger track career with her first June appearance at the State Championships at Jesse Owens Memorial Stadium on the campus of The Ohio State University.

Last season, Torrance Nonnenmacher was the only Tiger thinclad to compete at state. On her journey to Columbus, the senior long jumper was first at district in 17-8-1/2 and third at regional. At state, she placed fourth and earned All-Ohio honors with a school record leap of 18.2.75.

Last week, Nonnenmacher repeated as an ECOL long jumping champion with a mark of 17-7.75.

Nonnenmacher is also a leg on the undefeated MHS 4 by 100 relay team, which includes Meadow Benton, Courtney Schuck, and Lexie Mullen as well. At the ECOL meet, the Tiger foursome outran runner-up New Philadelphia, 51.51 to 52.07. The Quaker girls ultimately won the ECOL team title and are also favorites to claim the district title.

At district, Benton, Schuck, Mullen, and Nonnenmacher have a shot to also advance to the regional in the 4 by 2. In the league meet, they were second to New Philly.

Marietta distance runner Ciara Space is hoping to improve on her district fifth-place finishes in the 800 and 1600 a year ago. If the sophomore thincad does, she’ll be a regional qualifier.

On the Tiger boys’ side, senior Quintin Southerly is hoping to follow up his first-place in the long jump at the ECOL meet with a comparable district showing and a berth in the regional.

In the league meet, Southerly jumped a PR 21-6.

Over at St. Clairsville High’s Red Devil Stadium at 4 p.m. Friday, Fort Frye will be competing in the finals of the Division III district meet.

Senior Justin Anderson, the Pioneer Valley Conference Championship meet boys’ high point winner, is expected to pace the Cadets in the distance runs while junior Maddie Webb will be seeking to advance in the pole vault and discus. Webb, the PVC girls’ high point co-winner, is a two-time state qualifier in the PV.

Some other FFHS thinclads who bear watching are Brady Schilling (pole vault), Isiah Jones (shot put), and Anna McIntire (high jump). All were PVC individual champs in their respective event.

On Saturday, Warren, Waterford, and Belpre all will be in action at districts.

The D2 Warriors are at Meigs High at 4 p.m. while the D3 Wildcats and Golden Eagles travel to Southeastern High at 9:30 a.m.

Warren could be the team to beat at district.