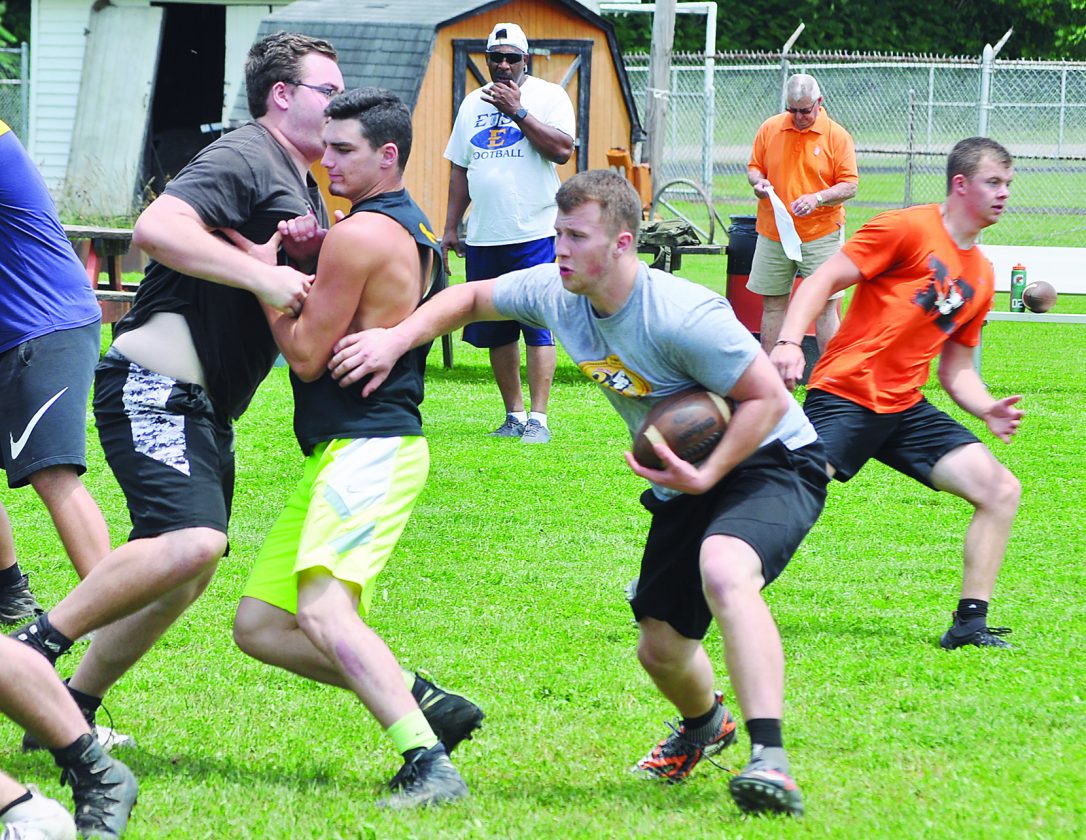 BELPRE — The Ohio all-stars will be looking to extend their two-game winning streak to three over the West Virginia all-stars during the 26th annual Battle Against Cystic Fibrosis All-Star Football Classic. The contest starts at 7 p.m. under the lights on Friday at Bill Hanlin Stadium Field from the campus of St. Marys High School.

With the win, the Buckeyes will match a team-best three-game winning streak over the Mountaineers, a streak they last accomplished from 1998 to 2000.

A team stockpiled with talent that can play on both sides of the ball, Ohio and Belpre Golden Eagle head coach Mike DeVol will be deploying a two-platoon system. That means a player will only play on offense or defense.

Along with keeping his players fresh, it will allow everyone on the team to get the opportunity to play in what will be for some their final game. Coach DeVol looks forward to the opportunity to deploy his gameplan, but he also insists the game is being played for fun and a worthy cause.

“Right now we are going to use two-platoon system, that way it doesn’t matter who you are. You are going to be on the field all night long one way or the other,” DeVol said after practice Wednesday. “It’s not fair for a kid that doesn’t get in until the last quarter. That’s not the way this all-star game is supposed to be. We are going to put them all on the field and have fun.”

Taking over at Belpre last season, DeVol will get another opportunity to coach Golden Eagles center-linebacker Gavyn Freeland and running back-outside linebacker Jesse Collins. Collins will be seeing time at running back, after rushing for 1,689 yards en route to scoring 21 touchdowns on 207 carries and 8.2 yards per carry.

“It’s absolutely fantastic. I’m just so happy to be here. We play for a great cause and helped that cause as well,” Collins said. “Only having coach DeVol for my senior year wasn’t enough. I’m here everyday in the weight room talking to him, so it’s great to bond with him one more time. Just learn, get advice from him and have him teach what he knows.”

Freeland will be at center and will be handling holding duties on field goals.

“It’s fun. They are great kids. They are very outgoing. They get along with everybody. We can make jokes and rib each other,” DeVol said.

Taking snaps under Freeland will be Logan Drummer from Southern. He will pull double duty and also kick for the Buckeyes.

After leading Fort Frye to its first ever regional championship last fall, Cadets Brenden Huck (TE-OLB), Evan Schob (FB-LB), and Draeden Turner (TE-DL) will be contributing for the Buckeyes.

“It’s an honor to play with some of the great players in our area and for a good cause too,” Huck said.

Coming off a season that saw him reach the quarterback four times, the BACF will be Huck’s second appearance at an all-star game. The first appearance happened back in April at the North-South Classic all-star football game in Massillon, Ohio.

“It’s a whole new experience. You gotta learn a new defense, but it’s a lot of fun too,” Huck said. “You know that you are playing with the best of the best against the best. It’s a fun, more laid back atmosphere. It’s a lot of fun to be around the guys.”

From Marietta will be TE-OLB-LS Matt Bertram, WR-OLB Tanner Stack, WR-SS Quintin Southerly and OT-DT Josh Rhodes. Stack was the Tigers leading receiver, with 458 yards and 2 TDs on 42 catches.

Stephens is a multi-threat athlete, as he finished his senior season with 4.5 sacks, 4 forced fumbles, 1,474 passing yards and 17 touchdowns on 88 completions as a quarterback. That effort proved valuable, as the 9-3 Wildcats reached the playoffs last year.