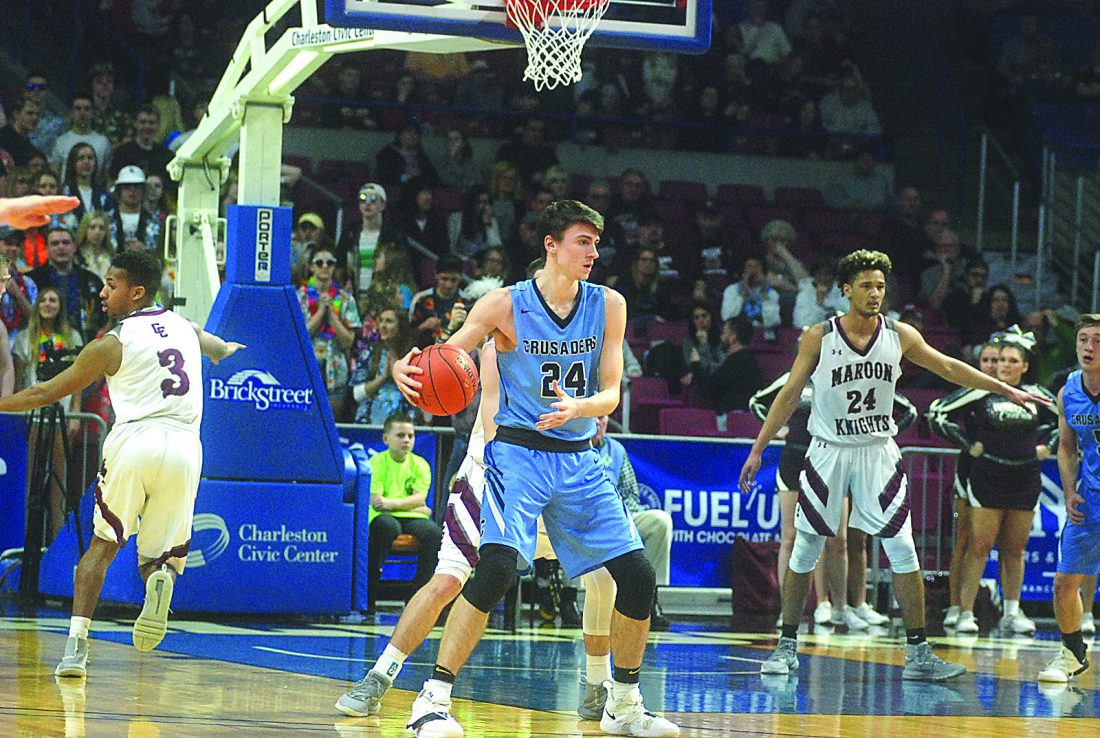 Photo by Jay W. Bennett Parkersburg Catholic’s Patrick Copen, pictured here at last year’s W.Va. Class A state basketball tournament in Charleston, will be one of the key seniors for the Crusaders of head coach Rob Strcula in 2019-2020.

PARKERSBURG — The three-week summer period is over for the Parkersburg Catholic boys basketball team of head man Rob Strcula.

The Crusaders’ coaching staff has been evaluating their roster, which suffered some big graduation losses that included all-time leading scorer Cade Ullman as well as inside presence Ty Sturm.

Jeb Boice, a third team Class A all-state selection as a junior, will be part of a seven-member strong senior class.

“Everybody is back,” Strcula said of Boice and fellow 12th-graders Patrick Copen, Xavier Collie, Jalen Brunny, Wade Smitley, Nick Stricker and Stephen Garvin. “We’ve got a transfer too in Jake Leisure (Parkersburg High).

“We expect him to play a big part in our program the next couple of years.

We didn’t play in the tournament in summer league because our guys were playing a 7-on-7. Football is up next so we kind of give them first dibs.”

After making a run to the state championship game where the Crusaders lost a hard-fought battle to fellow Little Kanawha Conference member Webster County back in March, the coach knows getting back to that level isn’t going to be easy.

“Our approach this summer is completely different than the regular season,” Strcula added.

“Go out and play off feel a little bit and see how they react to see who is capable of doing what.

“We got a good core of guys back from last year’s team.

We have to redefine some roles and take a different approach. We’re not starting over. We have to retool.”

Although losing members of a graduating class happens every spring, it’s not easy to replace “a once in every generation” type players according to Strcula.

“Cade and Ty, to have them on the same team was pretty special,” said the coach.

“We have some holes to fill. It’s an opportunity for those guys to step up. Jalen Brunny and Nick Stricker are going to get a chance to play more.

“Guys like Wade will get an opportunity to see what he can do. Losing guys always hurts, but we’re not starting from scratch. That’s the fun part of the program seeing where you were and where you are and where you want to be.”

Obviously, the Crusaders want to be back in Charleston for the state tournament next year.

In order to hopefully make that happen, PCHS once again will continue to play a tough schedule throughout the regular season.

“We want to challenge our kids every game with our schedule,” Strcula continued. “We found a formula we think is working. It’s about winning games later in the season and hopefully a tough schedule helps us mentally.

“There are barriers this team will have to break through. We don’t play games to win in December and January. We play to win games in February and March. It’s going to take some time to make some new chemistry.”

With a long way to go before hoops season comes back around, future opponents of the Crusaders should take note things won’t be easy on the hardwood for them in 2019-2020.

“We can be a good team in the conference down the road, but we got some work to do to get there,’ Strcula stressed.