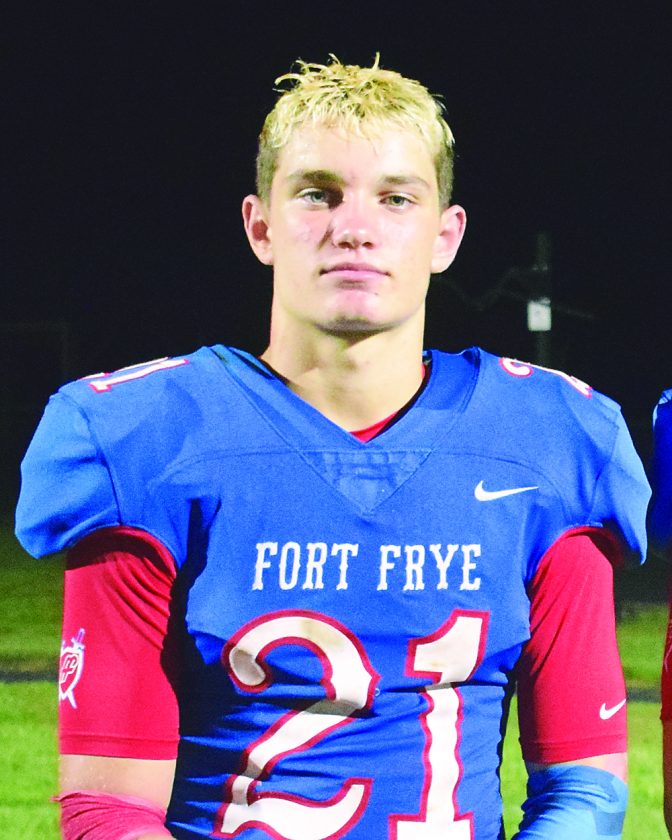 Courtesy photo Fort Frye’s Brian Adkins is set to compete in the Blue-Grey All-American Super Combine Monday at the Pro Football Hall of Fame in Canton.

BEVERLY — Brian Adkins had a breakout season for the Fort Frye football team in 2018, and now people all around Ohio are starting to learn his name.

Adkins, a junior for the Cadets, recently competed in the Blue-Grey All-American Regional Combine at Paul Brown Stadium, home of the Cincinnati Bengals. The combined tested each athlete’s skills, consisting of bench presses, broad jumps, 5-10-yard shuttles and 40-yard dashes. Adkins performed well enough to earn an invite to Monday’s Super Combine at the Pro Football Hall of Fame in Canton.

“It was quite an experience,” Adkins said of competing on an NFL field. “It was really fun. Probably one of the best experiences I’ve had.”

If Adkins performs well enough at the Super Combine, he will be in position to be selected to play in one of the Blue-Grey National All-American Bowls. He’ll be in Canton Sunday for a media event before putting his skills to the test once again on Monday.

Adkins found out he was one of the few to move on to the Super Combine via email.

“I was really excited and surprised,” Adkins said. “I’m pretty nervous for this next one. I’m wondering how good the people will be there.”

Adkins said his goal is to make it onto one of the bowl game rosters.

“I’m trying to get more exposure and maybe get to a bigger college,” he said.

Before that time comes, Adkins still has two years of high school football left. He was a key member of this year’s Fort Frye team that won the program’s first ever regional championship.

“It was pretty exciting,” Adkins said. “Our seniors went like 39-1 in the regular season in their careers. It was pretty special for them to go out with a regional championship.”

Adkins did a little bit of everything for head coach Eric Huck and the Cadets last season.

He finished with 11 total touchdowns, 6.4 yards per carry, 22.5 yards per catch and five interceptions on defense.

He was chosen for the Super Combine as a defense back, which is alright with him.

Adkins has been working hard since football season ended and has high hopes for another successful campaign on the gridiron in 2019.

“Right after basketball, I went to track trying to get faster there,” he said. “I think I did. I also have been lifting about four times a week. I’m just trying to get stronger and faster.

“I think my expectation for the team is do even better than last year. We want to win the first state championship in school history.”

In the meantime, Adkins is looking forward to showing off some of his skills in Canton.