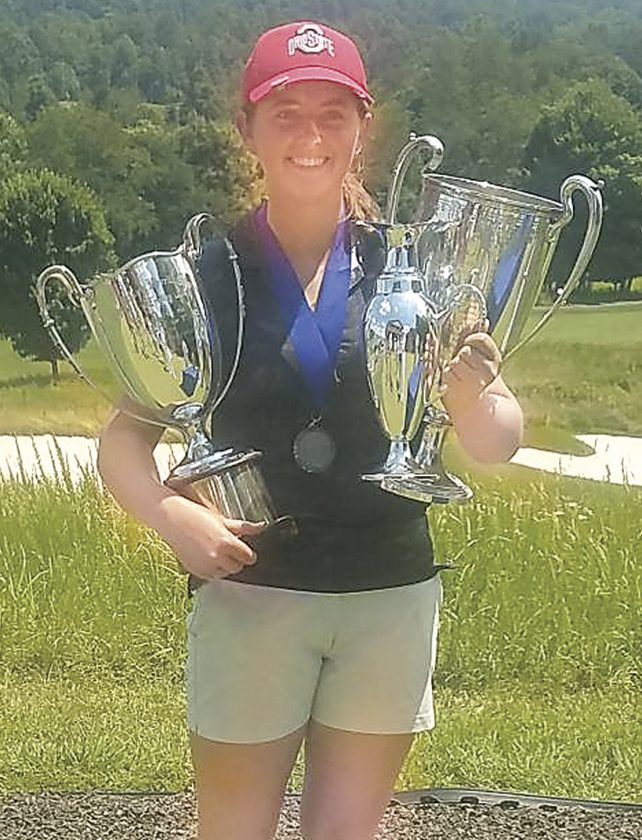 Shears, a Parkersburg South graduate and a rising senior for Ohio State University, entered the final round with a nine-stroke lead and ended up needing all of it.

After both golfers made birdie on the par-3 16th, the two-time defending champ still led by four strokes. However, that was cut in half after Kalaskey made par on No. 17 and Shears had a double bogey.

Entering the 54th and final hole of the event, the par-5 18th, Kalaskey did everything she could by making birdie, but the ex-Patriot tapped in for par from about a foot away to secure her crown by the single stroke.

Shears opened the tournament with a 1-under par 71 and followed that up with consecutive 79s for a 229 total.

“She’s a wonderful player and a great girl,” Shears said of Kalaskey. “I’ve played with her many times before and I’ve never seen her come alive like she did today. It was fun to watch, also nerve-racking to be honest. I had a pretty commanding lead, but it just kept leaking.

“I’ll be completely honest. I’m very disappointed in myself.

I’m very disappointed the way I played and the way I kind of handled myself mentally on the course both today and yesterday. I know I won, but it doesn’t feel quite like a win.”

Coming off a birdie on No. 7, Shears was 1-over on the day heading to the par-4 ninth, but ended up taking a nine.

“It was depressing,” she said of No. 9, which she birdied on Wednesday. “I don’t remember the last time I had a nine. I’ve definitely had a snowman on a par 5 not too long ago probably.

“It was kind of bad. I went into some high grass and thought I could get out of it and obviously I could not. That was a bad decision on my part.”

Huntington’s Susan Glasby and Charleston’s Lizzy Karsten each finished at 240 to tie for third. Hurricane’s Savannah Hawkins was a stroke back and placed fifth.

“I really haven’t had a lot of experience with barely winning,” admitted Shears, who is on pace to graduate in the spring from OSU with a degree in human development and family sciences.

“I feel like at the West Virginia Women’s Amateur I’m either not been close or I’ve had a commanding lead for the past few years or at least I felt it. During the round today, I just thought to myself I’m leaking shots.

“One here and one there, but you know I kept thinking pars are good out on this course and she’s making birdies. I needed to start doing something. I feel like I’m better at catching a leader than like keeping a lead. I guess posting a good round the first day is probably not a good thing for me.”

Brill made birdie on the par-4 third, but followed that up with a double on the par-5 eighth.

“Yeah, I did,” Brill quipped. “The back nine it was a complete different course for me. The front nine I played super well and then I started struggling getting it off the tee and fumbling around for a while. I tried to keep a level head and keep calm and not have a complete meltdown. I knew I was close to staying in the top 10.

“They were dropping back as well and they weren’t playing good. I had to stay calm. It (this week) was awesome.

I’m not really happy with my scores and how it turned out, but compared with how I’ve been playing the last year, finishing in the top 10 is a nice feeling. I’ve still got work to do, but I’m heading in the right direction.”

Parkersburg Big Red Nicole Lincicome, who will be a junior this fall, finished in a tie for 17th place with Coolville’s Teresa Harper after carding a three-day total of 275.