Turner Hill tearing the cover off the ball 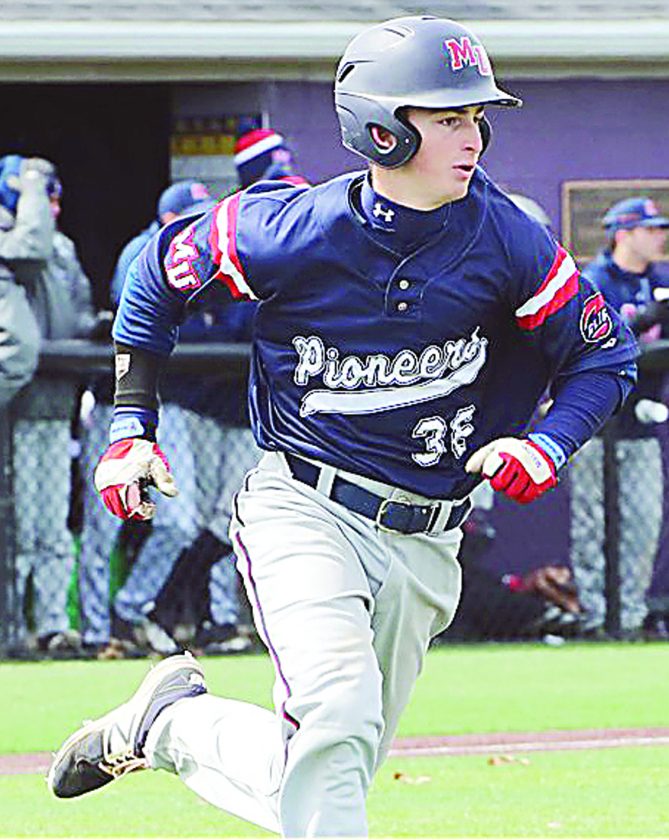 Courtesy photo Malone’s Turner Hill, a Marietta high graduate, runs the bases during a college baseball game in the spring. Hill currently is playing for the Licking County Settlers of the Great Lakes Summer Collegiate League.

After 11 games, the Malone University Pioneer baseball standout was batting .500 (14 of 28) for the Licking County Settlers.

“I’m seeing the ball well, and I’m off to a pretty good start,” said the 20-year-old Hill. “I’ve been lifting and putting a lot of time in the batting cage.”

Never mind that the 5-foot-11, 175-pound Hill went hitless (0-2) in LC’s 13-10 triumph over the Richmond Jazz this past Sunday in the opening game of a doubleheader at McBride Stadium in Richmond, Ind., he still managed to score one run and drive in another batting in the 3-hole. In the nightcap, the contest was suspended with the Settlers leading 6-3 in the bottom of the seventh inning.

The Settlers currently own a 7-4 record and trail the front-running Hamilton Joes by one game in the South Division of the GLSCL.

Before Sunday’s twinbill, Hill had had four straight multiple-hit games, and the Settlers won three of them.

But then, the left-handed-swinging Hill has always been a winner, an excellent contact hitter, and a tough out at the plate. At Marietta High, where he played his prep ball, he had a three-year career batting average of .362 and was a two-time first-team All-Ohio honoree. In his senior season, he hit .456 and played in the prestigious Mizuno All-Ohio Series.

Marietta was 21-8 in Hill’s senior season.

It should be noted that Hill was one of the Tiger aces as well, compiling a 6-3 mound mark with a 2.58 ERA during his career.

After graduating from MHS, Hill played legion ball for Marietta Post 64 (In past summers, he also played for Beverly/Lowell.) before attending Malone of the Great Midwest Athletic Conference. At Malone, he had an immediate impact as a freshman. As the Pioneers’ starting right fielder, he was second on the team in batting with a .340 average.

Malone finished Hill’s rookie season with a 34-18 overall mark. Hill himself was a second-team all-league performer and was named the G-MAC Freshman of the Year.

This past spring, Hill was the only Malone position starter to hit over .300, batting a team-high .335. Once again, he was voted second team G-MAC All-conference, and the Pioneers finished the campaign 33-18.

Next year when Hill’s a junior, he’ll be joined at Malone University by younger brother Kail, currently competing for Marietta Post 64.

At Malone, Hill said that he’s changed his major from mechanical engineering to finance with a minor in math. Currently, he owns a 3.0 GPA in the classroom.

This summer will be Hill’s second as a Lincoln County Settler. Last year, he hit .282, he said.

The Settlers play their home games at Don Edwards Stadium in Newark.

One of Hill’s LC teammates is Nate Meyer, the son of former Ohio State University football coach Urban Meyer. The younger Meyer plays his college ball at the University of Cincinnati.

When not playing ball, Hill resides with a host family in Newark.

“I’m keeping pretty busy,” he said. “When not working out in the cage, I’m taking a couple of on line courses.”

Hill is the son of Steve and Nicole Hill of Marietta. Along with Kail, he also has a sister Addie.