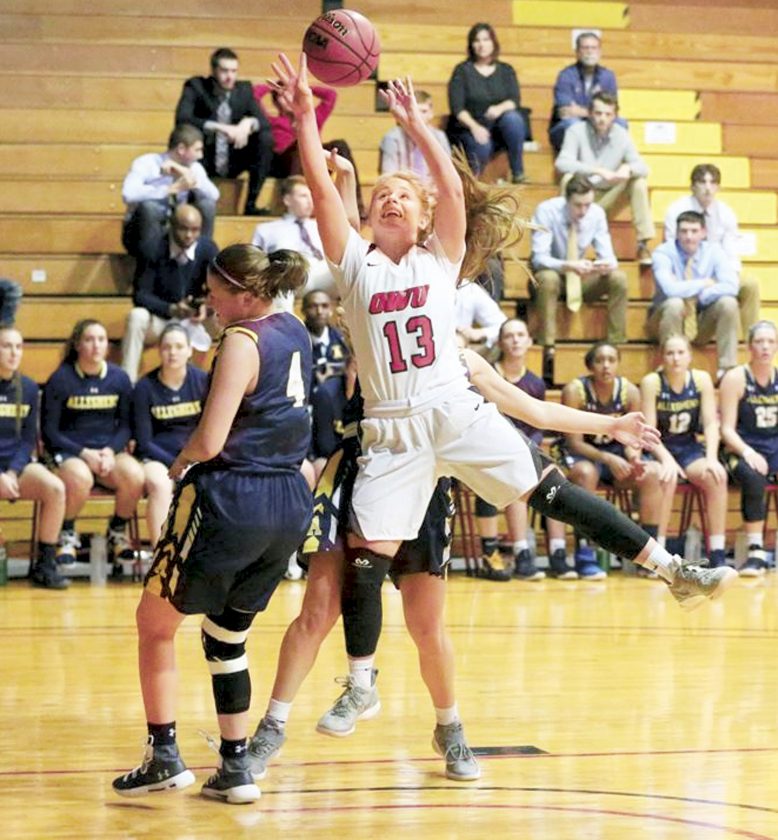 Hefner believed she didn’t want to be 23-minutes close to home though and chose Ohio Wesleyan, alongside a largely idyllic opening year of college.

She achieved perfect results in her first two semesters majoring in biology with a grade-point-average of 4.0 and contributed heavily to the NCAA Division III Battling Bishops on the basketball court.

Despite the success, something didn’t feel right.

Something more than the injured toe and broken thumb suffered halfway through the season.

Car rides back home almost every weekend for a quick check-in with her family became part of her routine. The opportunity to see friends proved a strong draw, as well. Most both groups couldn’t make the trip to see many of her basketball games. It was a difficult reality to face for the freshman.

Challenges in her first-semester class lineup and adjustments to the grind of college life could have been the culprits for the frequent visits, but she wasn’t 100 percent sure.

An improved and less stressful outlook came in the second semester helped by several factors. Her academic schedule lightened and her first college basketball season kicked off with her Nov. 17 effort against Washington College.

Still, the thought persisted as she kept making the two-and-a-half hour trip home every weekend and over the course of multiple conversations with coach Lobdell.

She trusted her coach’s words. Her main reason behind enrolling at Ohio Wesleyan upon graduation from Parkersburg South was because she liked the people. There was no better person to go to then the adult figure she spent most of her time around on the Delaware, Ohio campus.

“I wasn’t going to transfer before the year was over,” said Hefner in an interview Monday at the Elite Center. “I talked to coach Lobdell five times throughout the year with the last one being my decision to come back home. She told me to give it time in the second semester but I still caught myself wanting to come home.

“It was a hard choice because I didn’t know if it was me thinking I had never been away from home that long and it just felt weird or if I was a homebody.”

Reaching her decision shortly before the end of the school year, Hefner celebrated the weight coming off her back. The only challenge now came identifying a school much closer to home where she could still play basketball. Playing the hardwood sport stood as a must in her search.

She didn’t need to ask before a solution quickly appeared to her conundrum. Even better? The answer was less than half an hour away from Parkersburg.

“We talked and I visited and it ended up being close to home which is a good thing,” said Hefner. “The Pioneers were still interested and things worked out pretty well.”

Hefner’s played with her teammates in an open gym one time and had nothing but good things to say. She joins a “fun group” having made waves in the Ohio Athletic Conference alongside qualifying for the NCAA Tournament two seasons ago.

Basketball, in fact, consists of most of her summer activities. Workouts with Parkersburg High boys’ coach Brian Crislip have her in shape. She is working at the Elite Center and instructs youth in several camps, too.

“It really is a great feeling,” said Hefner. “I can work at the Elite, which is basically my second home, decide when I want to hang out on campus or do my own thing without much trouble.

“My friends and family are pumped too because they get to see me play. I am excited for them to come watch games.”

Joe Albright can be reached at jalbright@mariettatimes.com.