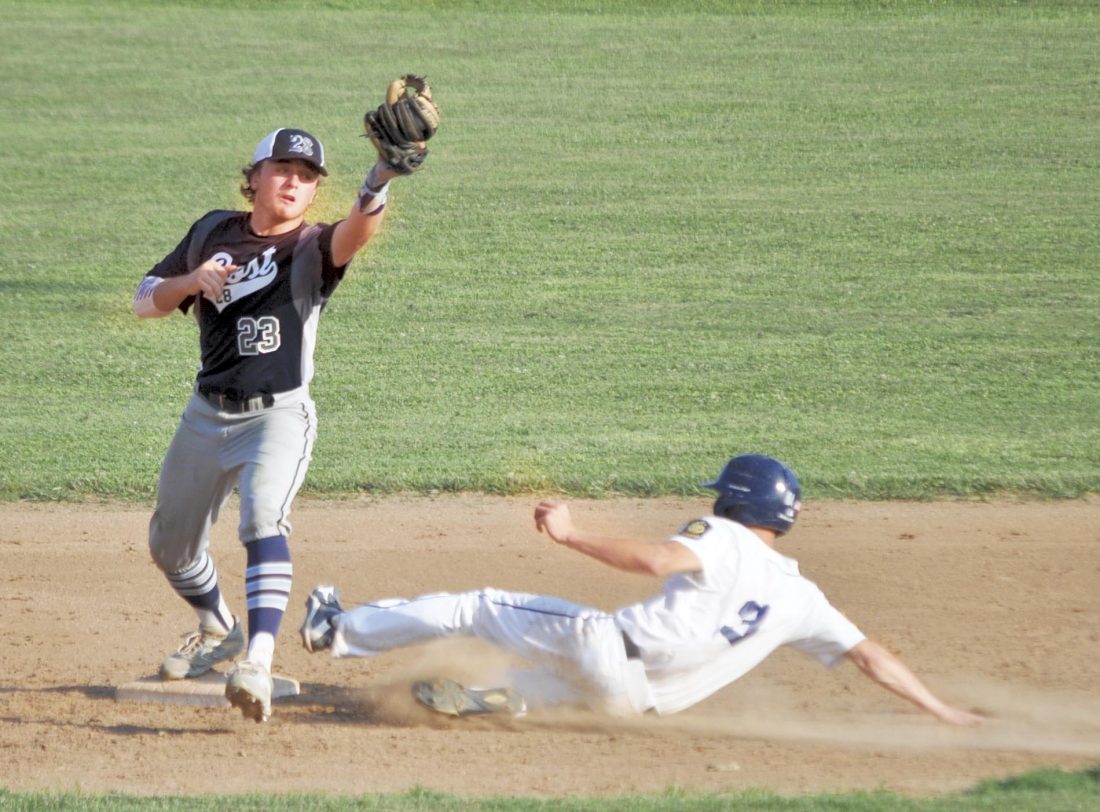 MARIETTA — Bringing an 8-4 lead into the top of 7th and one out away from being final, Marietta Post 64 struggled to get the final out, allowing New Martinsville Post 26 to score two runs off an errant throw that went out of play.

Post 26’s Brendan Fox though grounded to third baseman Jarred Richards for the third out and Marietta hung on for an 8-6 victory over Post 26 Monday evening at Legion Field.

Coming into the seventh from second base, Jake Rose struck out the first two batters he faced on just 10 pitches before walking pinch hitter Eli Miller.

Thomas Sexton singled on the first pitch he saw from Rose, hitting a fly ball that center fielder Dakota Miller nearly pulled in. Looking like the final out, a Jason Beistel groundball to shortstop Derek Duckworth, Duckworth made the throw in time.

But it went off the first baseman’s glove, making it only a two-run Post 64 lead.

That’s the closest 26 got, as 64 recorded the third out on the next at-bat.

“Our performance was good enough to win and I give New Martinsville credit for playing a solid game. They made plays when they needed to make them,” Post 64 head coach Larry Hiser said.

“I give credit to their pitcher, (Trey Slider) for getting out of jams and keeping the game close all the way until the end. We got more hits than they did in the right situations to close the game and give us the push in the end. They were a solid club and we needed a solid game to beat them.”

Trading the lead back and forth and down one run going into the bottom of the 4th, Post 64 capitalized on three walks, one wild pitch, a poor pickoff attempt by Post 26 pitcher Trey Slider and a two-run double to center field by Jarret Jackson. Post 64 scored four runs and took the lead for the remainder of the game.

With the leadoff hitter going down on a fly ball to center field, Jake Rose got a free pass to first base and reached second thanks to Joe Zimmer’s single to left-center field. With Derek Duckworth in the batters’ box, Rose and Zimmer both reached a little bit closer to home plate, executing a double steal on the 2-1 pitch.

On the 3-2 pitch, Slider’s throw bounced off catcher Alec Chaplin’s mit, landing near the fence behind home plate. Slider walked Duckworth and Rose to crossed home plate on the wild pitch to make the score tied at 4 all.

Slider later walked Kailin Hill and Zimmer later scored off a pickoff attempt that went off Hill while he was diving back to first base and bounced to the fence near Post 26’s dugout. Along with his two-run double, Jackson went a team high 3 for 4, with two singles and two RBIs.

“He was down early in the count, battled back and had a double in the gap,” Hiser said, “It’s tremendous hitting, he swung at some bad pitches to keep himself alive. But when he got one he wanted, it was a good shot.”

Duckworth doubled to left field in the sixth inning and Carter Dennis finished 2 for 4 with an RBI, also in the sixth.

Foster Brand was the winning pitcher for Post 64, going 4 2/3 innings of work though he struggled with his command from the mound walking six batters with five punchouts.

Relievers Mike Reeder and Rose made an appearance out of the bullpen for 64.

Relieving Brand in the top of the 5th with two outs and runners on the corners, Reeder prevented any runs being scored, striking out Austin Scheoblehood to leave the inning with two runners stranded on base.

Reeder pitched the 6th, but walked three batters and allowed a run off a wild pitch.

The losing pitcher for Post 26 was Slider, pitching a complete game, striking out two batters and walking four.

Caden Cisar and Greathouse both singled and brought home a run for 26.

Tyler Bennett can be reached at tbennett@newsandsentinel.com