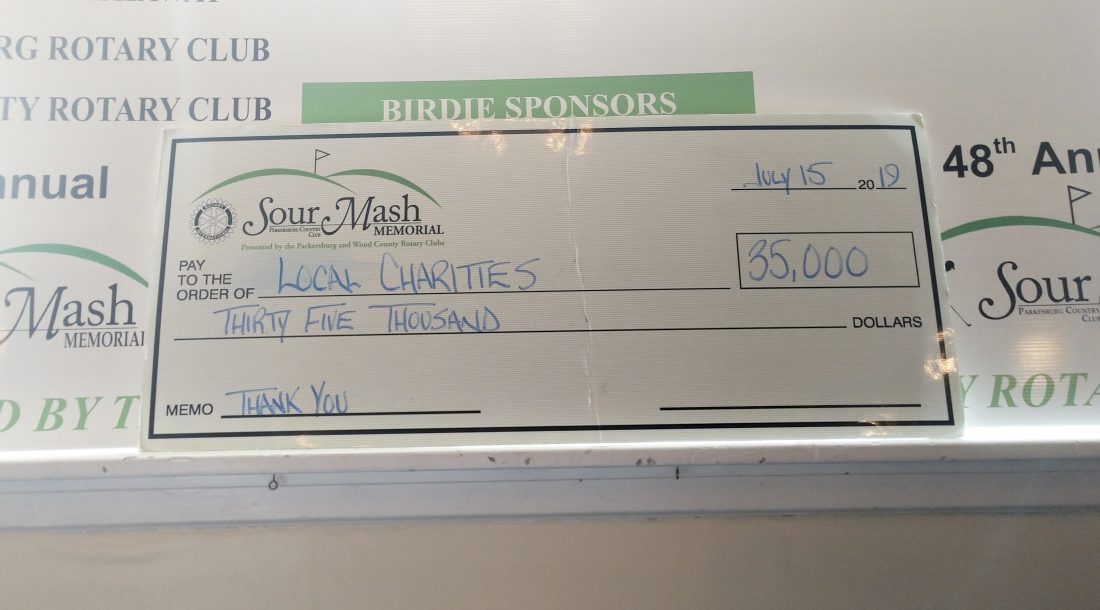 Photo by Ron Johnston Kim Nguyen is preparing for her seventh running of the News and Sentinel Half Marathon this summer. SHe has been close to a regular on the local running circuit to stay in shape.

Photo by Josh Hughes PCC club pro Scott Davidson (at front) and PGA Tour Pro Martin Piller (at back) enjoy a joke on the first tee before they teed off in an exhibition round with the 2018 winners of the Sour Mash Memorial Open during the 48th edition of the event Monday at Parkersburg Country Club.

The tournament serves as a vehicle for the $35,000 raised for local organizations, and this year’s group of grant recipients was as worthy as ever.

Honoree Mickey Welch selected the Boys and Girls Club of Parkersburg as one of those organizations. It joins Westbrook Health Services, the Circles Campaign, the Gabriel Project, Voices of Children,

Golfers from all around the local area gathered Monday morning at the Parkersburg Country Club to get an early start on the day’s action, but there was one golfer who was noticably late. 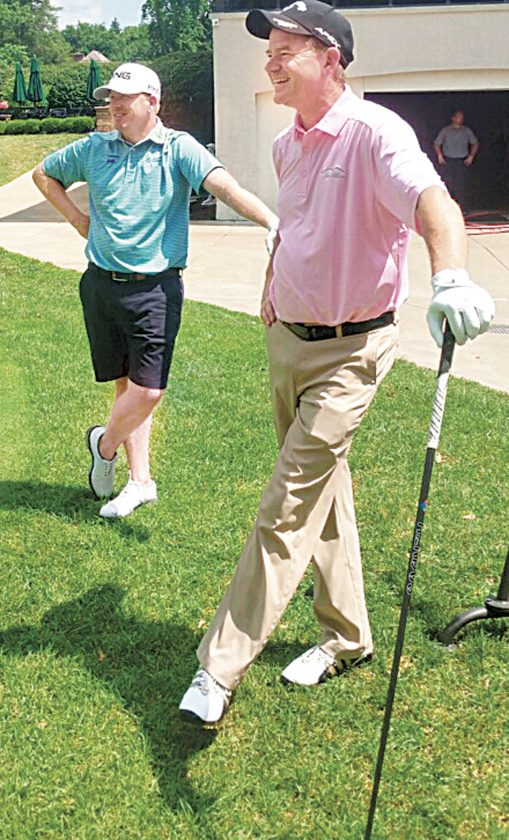 Photo by Josh Hughes PCC club pro Scott Davidson (at front) and PGA Tour Pro Martin Piller (at back) enjoy a joke on the first tee before they teed off in an exhibition round with the 2018 winners of the Sour Mash Memorial Open during the 48th edition of the event Monday at Parkersburg Country Club.

When Brittany Lincicome had her child eight weeks early, she understandably was unable to make it.

That’s when Martin Piller of the PGA Tour stepped in.

“I have the same agency as Brittany, and so, I was headed over to the John Deere (PGA tournament) when they called me,” Piller explained.

“They were like, ‘We have a possible outing in West Virginia in Parkersburg.’ I didn’t know where that was, so I had to look it up on a map to see where it was.”

Piller prepared to fly out of Chicago to Columbus on Sunday, but his flight was canceled. Instead, he drove from Chicago to Dayton on Sunday and drove the rest of the way on the morning of the Sour Mash Memorial.

Before he arrived, organizers had to think on their feet about how to fill time. In order to do that, three local standout golfers of importance hit honorary shots off the first tee to get the event underway.

First up was Parkersburg High School junior, Nicole Lincicome. After she teed off, she talked about how fourth cousin Brittany Lincicome has played a major role in her young golf career.

“Thank you for coming out,” she said to the crowd on hand. “I’m 16-years old, and I’m pretty nervous, because I’ve never hit balls in front of a crowd like this in my life. Growing up playing golf and watching Brittany was a lot of fun. She’s a really big role model to me, and I think about her a lot when I play.”

The next one who teed off was Vienna-native Lauryn Davidson.

In addition to being the daughter of club professional Scott Davidson, she completed a year of collegiate golf at Marshall University and three years of the sport at Lipscomb University.

When she addressed the crowd, she talked about her appreciation for the game of golf and what the game means to her. She also talked about what the Bryce, Lietzke, Martin Scholarship was able to help her accomplish. The scholarship’s winner also gets grant money raised from this tournament, as it helps young local golfers chase their dreams at the next level.

“It’s weird for me to think that I’m done with college golf. I still feel like I should be 17-18, and I feel proud that I’m a retired college golfer,” she joked to the crowd. “But being done and looking back on college with how much it would have cost without the game of golf, I’m very thankful for this tournament raising money for the scholarship, because that was less that I had to worry about.”

Adeena Shears was the last one of the trio to tee off. A senior from Ohio State University, Shears graduated from Parkersburg South and rounds out a marquee list of local talent. Just last month, Shears captured her fifth West Virginia Amateur Women’s Championship at the Stonewall Resort in Roanoke.

Co-chairman of the event Ray Fanta was preparing to head out on the first tee for an afternoon session with his group when he explained the significance of the event from a fundraising standpoint.

As for the golfing itself, tandems of four played for a chance to face-off against Davidson and the invited Tour professional at next year’s event. The 2019 winners were Nathan Fluharty, Jacob Beha, Aaron Moore and Ernie Smith. The featured foursome of Joe Bell, Sandy Bell, David Roach and Mike Topping squared off against Davidson and Piller but came up a bit short. Davidson shared his thoughts on the 69-62 clash.

“It was a blast,” Davidson said. “It’s always fun to play with these Tour pros. You can just see the level he was on, and you also see that he was able to communicate with the regular golfers. We all had a great time.”

Piller will remain busy after the Sour Mash Memorial as he has a few different events on his calendar in the coming weeks.