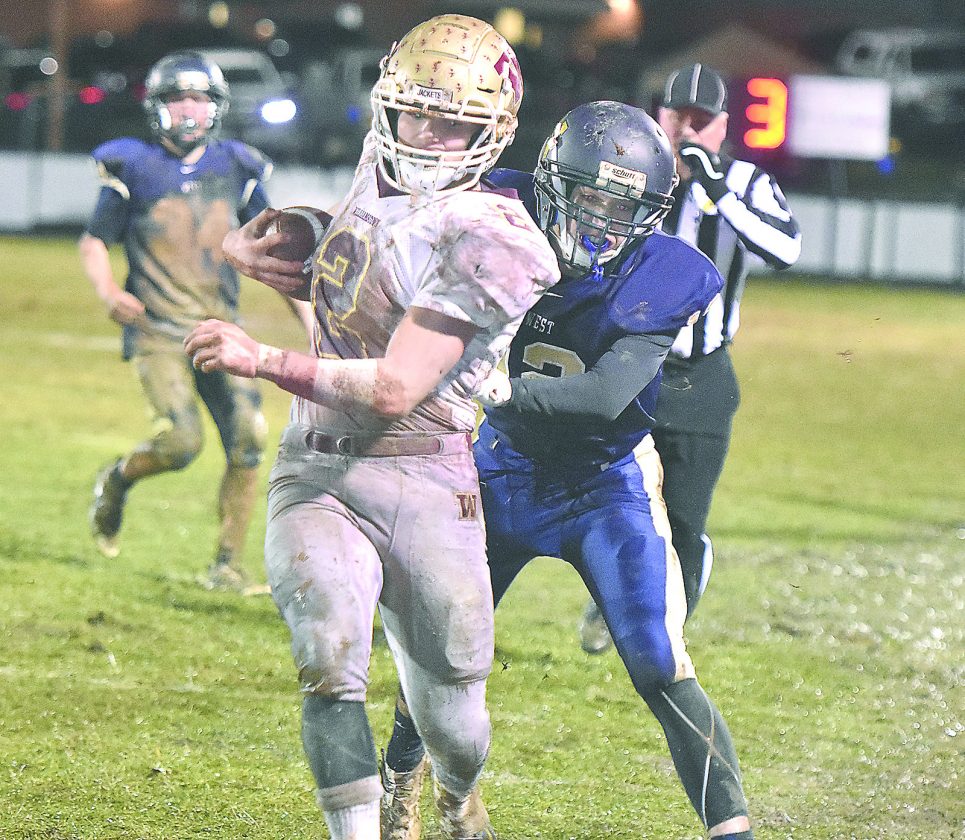 (Brad Davis/The Register-Herald) Williamstown ball carrier Ty Moore gets loose for a big gain down the sideline before being caught by Greenbrier West's Lawson Vaughan Friday night in Charmco.

CHARMCO, W.Va. — It was a first half that Greenbrier West would just as soon forget.

On a night where a muddy field appeared to give the bigger No. 4 rated Cavaliers an advantage up front, it was No. 5 rated Williamstown that controlled the line of scrimmage in the first half to build an insurmountable, 21-point lead en route to a 34-22 win Friday in their Class A quarterfinal playoff clash.

“They just out-quicked us tonight,” Greenbrier West head coach Toby Harris said. “They just whipped our line in the first half. I think in the second half our linemen stepped up and we started moving the ball and getting them down a little bit.”

After a promising Greenbrier West drive was derailed by a mishandled snap on the opening drive of the game, the Yellowjackets quickly took control marching 90 yards in eight plays for a 7-0 lead.

“Supposedly the rain is an equalizer for sure,” veteran Williamstown head coach Terry Smith said. “We usually throw it a little bit to keep people honest. We weren’t really able to do that, but we played really well in the first half, obviously.”

Trapped deep at its own 10, Williamstown flipped the field position on the first play from scrimmage when Ty Moore broke loose for a 42-yard gain. West appeared to have the initial drive stopped, but on fourth-and-9, quarterback Brayden Modesitt hit Logan Richards out of the backfield for a 21-yard touchdown pass.

Two key mistakes by the Cavaliers in the second quarter gave Williamstown the opportunity to break the game open and the Yellowjackets took full advantage.

The first mistake came on the only turnover of the first half and it occurred at the worst place possible for West, deep in its own territory.

A slant pass that was behind the intended receiver was tipped into the air and landed in the hands of Modesitt.

Modesitt returned the ball to the 12-yard line and three plays later, Richards scored his second touchdown on a 5-yard run to give the ‘Jackets a 14-0 lead.

The second mistake of the quarter for West came with a little more than five minutes to play in the half on fourth-and-1 when an illegal procedure call forced West to punt the ball back to Williamstown.

A short punt gave Williamstown great field position and six plays later, Moore scored on an 11-yard scamper for the 21-0 lead at halftime.

The second half was a different story and West came storming back.

“Greenbrier West just started running through us, they are pretty big,” Smith said.

“Greenbrier West is really good and they started making some plays.”

Unfortunately for the home team, each time it would get within one score, Moore would put the ‘Jackets on his back and answer with scores. Moore pushed the lead back to 27-14 on a 15-yard run with 9:37 to play.

“(He) was the difference tonight. We couldn’t stop him and that was the bottom line,” Harris said about Moore.

Greenbrier West kept fighting and when Brown scored for the third time in the second half, the Cavs were within five points after Kaiden Pack scored on the two-point conversion.

“Our linemen started blocking and we found some places to run the football,” Harris said about the second half success.

On the first play after the score, Moore broke free on a 39-yard run and four plays later scored the back-breaker on a 5-yard run.

“We got down too far,” Harris said.

“We fought back, but, we just made too many mistakes early.”

“The thing about Ty is he works really hard,” Smith said. “I know that is kind of a cliche’, but he works hard. He is one of those guys you can really count on. I think he has gotten better and better.”