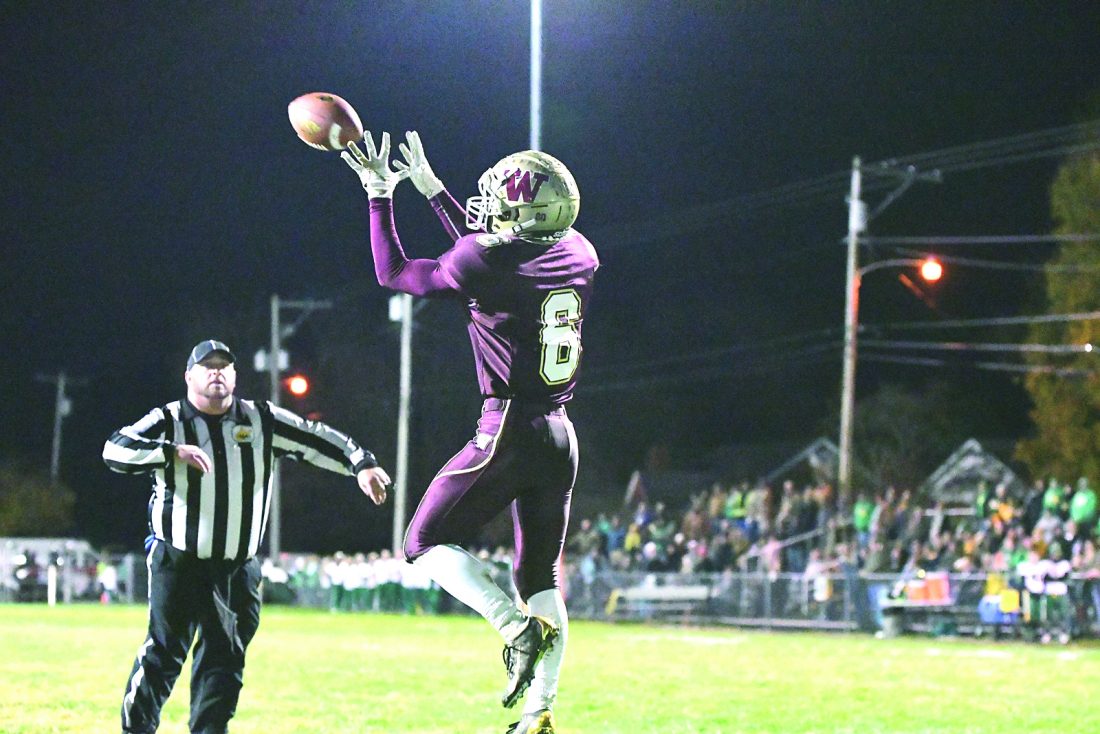 Photo by Neil Smith Williamstown’s Mason Deem goes for a catch in the first matchup between the Yellowjackets and the Doddridge County Bulldogs earlier in the season at Yellowjacket Field.

WEST UNION — Wheeling Island Stadium and a spot in the Class A state championship game beckon Williamstown and Doddridge County at 7:30 p.m. today.

The Yellowjackets and Bulldogs meet for the second time this season, but this time on Doddridge County’s home turf of Cline Stansberry Stadium.

“If you can’t get excited for this game then you better check your pulse,” said Doddridge County head coach Bobby Burnside.

The path back to Wheeling for the second time in as many seasons is straight-forward for Williamstown and head coach Terry Smith. “We want to take care of the ball a little better,” said the Yellowjacket leader. “And we are hoping to slow down Hunter America a bit. Doddridge does other things against other teams but when we play them, they hand the ball off to him 40-some times.”

Probably because the 2018 Curt Warner Award winner responds on the big stage. America followed up last season’s 310-yard, two-touchdown effort against the Yellowjackets with 245 yards and a pair of scores a little more than one month ago. Doddridge County won the game 20-7, and with it took the No. 1 seed and the Little Kanawha Conference championship.

If it isn’t broke don’t fix it, is Burnside’s approach to his offense this week.

“I don’t know if what we have to do changes unless they force us to. We need to play really good defense, establish the line of scrimmage and get our run game going,” said Burnside.

“Maybe hit a few passes in key moments and create turnovers. This has been our MO all year.”

Five turnovers from the Yellowjackets ensured America and the offense had numerous chances to find the end zone. Four of those takeaways were forced by a stingy Bulldogs’ defense.

Burnside doesn’t anticipate both teams to have another sloppy night.

“We aren’t banking on getting five turnovers and we aren’t planning on committing three turnovers,” said Burnside, whose team seeks its first trip to the state title game since 1978.

While he might not bank on it, his team showed a knack for generating turnovers in a 21-6 quarterfinal win against East Hardy. Hunter Jenkins’ three interceptions brought the total forced against the Cougars to eight.

But Doddridge also excelled at stopping Williamstown power rusher Ty Moore. He was held to just 53 yards on 15 carries. Smith said the Yellowjackets won’t turn solely to the air and quarterback Brayden Modesitt to win this contest.

“We will just do what we can to win,” he said. “I am not comfortable throwing the ball at all. You can’t just line up and run the ball down the other teams throat though it certainly seems they can do it to us.”

Burnside said his group will be ready for anything.

“Our kids are excited and realize every week gets more challenging. We know the caliber of football team we are getting ready to face,” said Burnside. “Our boys played hard the first time and they will have to do the same thing Friday. They need to play mistake-free football. Not necessarily perfect but as close as we can get to it.”