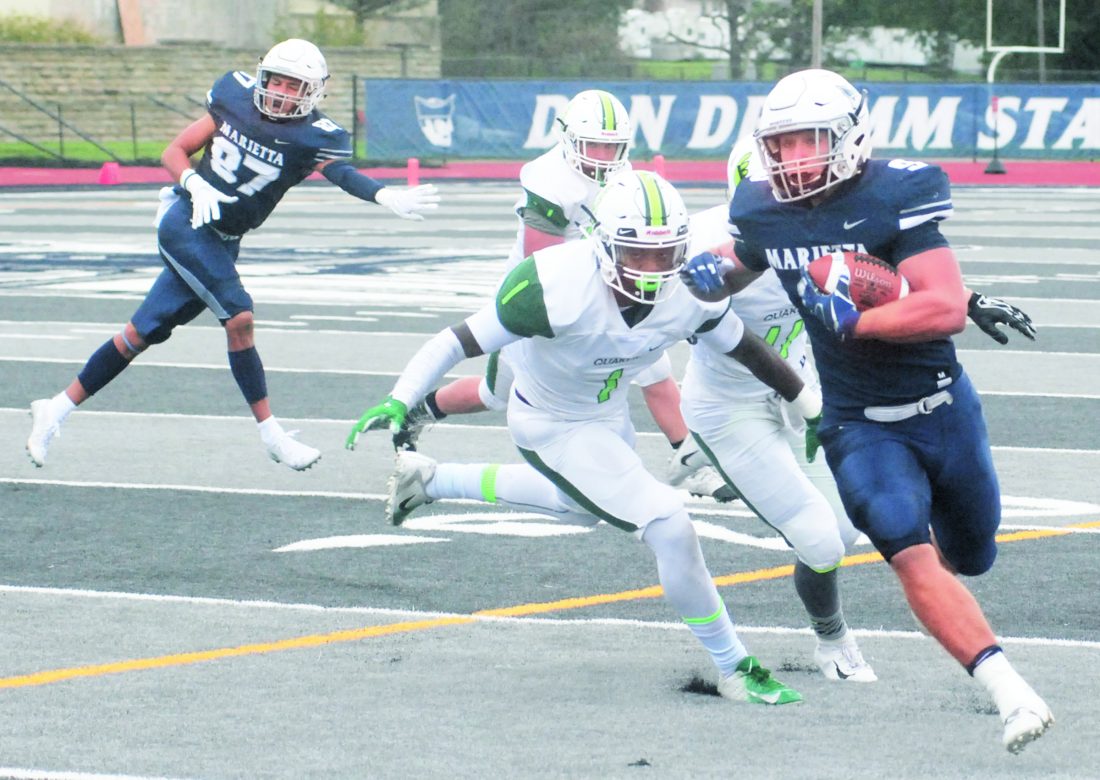 AUSTINTOWN — Marietta College placed seven players on the 2019 All-Ohio Athletic Conference Football team announced Monday by the league office. The Pioneers went 5-5 overall this year and finished 4-5 in the OAC.

“The OAC is a great league with some outstanding athletes and these seven young men have been chosen as some of the best,” Marietta head coach Andy Waddle said. “Tanner, Andrew and Kyle put together four outstanding years in our program and are very deserving of this recognition.”

Clark is making his second straight appearance on the first team after leading the Pioneers in rushing again this year. Clark averaged 99.4 yards per game in nine games and scored a team-best 10 touchdowns. He finished his career ranked fourth on Marietta’s all-time list with 39 touchdowns and 238 points.

Gallagher, a second team honoree in 2018, earned first team accolades for the first time in his career. The defensive lineman was third on the team with 64 total tackles and 11 tackles for a loss. He led the Pioneers and ranked fourth in the OAC with 8.0 quarterback sacks.

“Kyle had a special season and did a little bit of everything for us,” Waddle said. “As a defensive tackle you expect the tackles and sacks, but he had a pair of pass break ups and an interception. I’m glad we get him back for another year.”

Pryor started all 10 games in the defensive secondary and finished sixth on the team with 54 total tackles. The first-time all-conference player led the OAC with 18 passes defended, 17 break-ups and two blocked kicks.

“Tay ranked in the top-10 nationally in passes defended,” Waddle said. “He is very active from the boundary corner position and his speed and athleticism is a big part of our defense.”

“Bobby is not only someone who can catch passes, but he is also a very good blocker,” Waddle said. “It is his blocking that puts him on the all-conference team.”

McSweeney stepped into the starting role this fall and ranked among the league leaders in virtually every passing category. He set a Marietta single game record with 440 yards passing against Heidelberg. For the season, he completed 185-of-302 passes for 2052 yards and 20 touchdowns. His 185 completions and 61.3% completion percentage ranked third in the OAC, while his 2052 yards and 20 touchdowns ranked fourth.

Neuberger started all 10 games at linebacker and finished second on the team with 69 total tackles. He led the Pioneers with 13.5 tackles for a loss, three forced fumbles and three fumble recoveries.