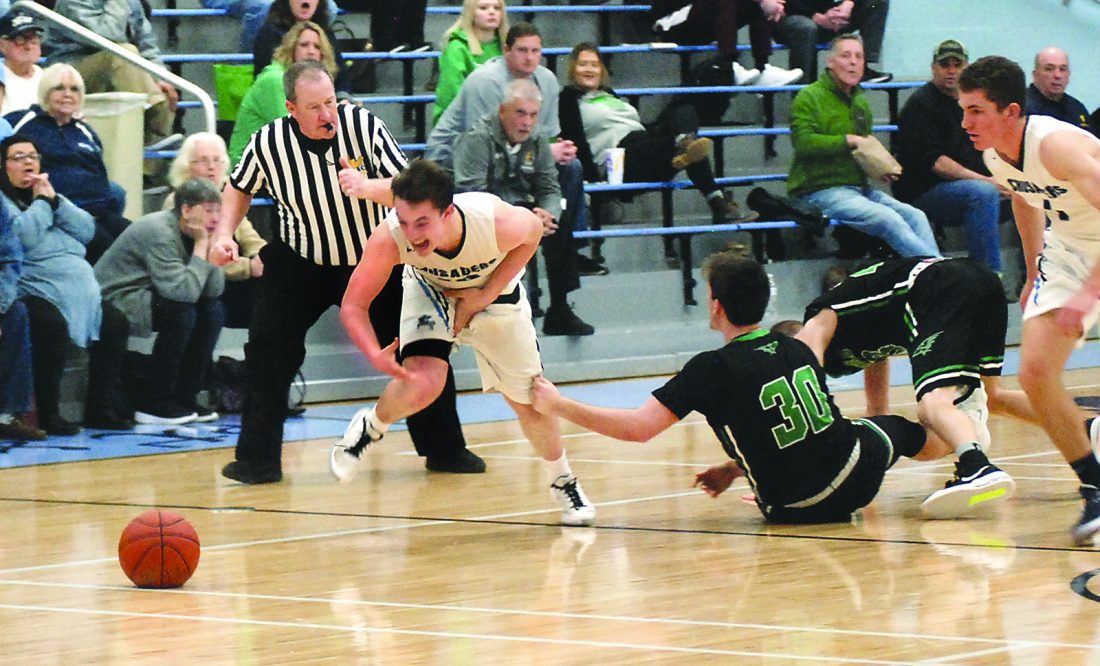 PARKERSBURG –Senior Night at Parkersburg Catholic had everything, and it featured big performances from some of the seniors that lifted the Crusaders to a 69-60 victory over Winfield in a Monday night shootout. Additionally, it marked the final regular season home game for seniors Patrick Copen, Jeb Boice, Xavier Collie, Nick Stricker, Jalen Brunny and Ben Vierheller.

Copen’s 31-point, 11-rebound game led the way, and Boice also had a big output for the Crusaders (14-8) with 24 points and eight boards. After the end of the game, Boice took notice of his stats by saying he “did it for Kobe (Bryant).”

In a display of high-percentage shooting, Boice channeled the late Laker great by scoring when it mattered most.

For Winfield, a productive contest from Hunter Morris meant he also had no problem rising to the occasion.

An 18-9 second quarter for the Generals put them up at the break, 31-27. However, the trio of Copen, Boice and Collie was too much for the visitors to overcome. Collie capped off Senior Night finishing in double-figures alongside Copen and Boice with ten points of his own. The third quarter was senior-heavy for PC, as they attempted to hold off scorers like Morris and Ethan Kincaid. Kincaid cruised through the first 16 minutes of action with 15 points, but he only managed one more 3-ball in the second half.

Boice, Collie, Stricker and Copen all got in on the scoring action to help claw back into the lead, and the third was finished with a pair of Copen free throws to extend the Crusader advantage to 46-41. Although Catholic started to pull away, Winfield (9-12) fought back to make this game a tight one in the late stages.

With 3:21 left, Morris drew contact on a 3-pointer that went in. The and-1 free throw was good, and that 4-point play cut PCHS’s lead down to 56-50. Both squads continued to trade possessions with the game in reach, and this time, it was Blake Morris who stepped up for the Generals.

Morris knocked down a jumper with 39.6 seconds remaining that made the 63-60 Catholic lead seem more vulnerable than ever. However, key free throw shooting from in the last half-minute Collie (2-2) and Copen (4-6) closed out the win.

As a team, Parkersburg Catholic shot 21-of-23 from 2-point range, and that helped remedy their woes from beyond the arc. They only shot 3-of-23 from downtown, and head coach Rob Strcula said that kind of inside shooting is what propelled them to a nice Senior Night triumph.

“We did something we haven’t done all year. We put five shooters out there on the floor and tried to spread them out. (Winfield) was hugging our other guys just enough for Pat and Jeb to get to the paint and make easy baskets,” he said. “I’ve been telling anybody who will listen that I feel like we’re better now at 14-8 then we were at 8-3. We ended the year against two quality AA opponents, and to get this win on Senior Night is the cherry on top. This is really special.”

While the Crusaders don’t know who they will play in a sectional quarterfinal matchup, Winfield takes this loss and moves on to play in their Senior Night on Thursday night at 7:30 against George Washington. Still, head coach Chris Stephens saw what caused the win to slip away from his team in the second half.

“We made shots tonight, probably more so than we have all year, but we didn’t play hard enough. Give credit to Parkersburg Catholic, they were tougher than us,” he said. “When they took our shooters away, it was harder for us to score. They wanted it more from the tip.”

Copen and Boice’s big performances lifted their team to a win, and they both reflected on what made the contest so special.

“For me, it feels really great,” Copen said. “We knew it was going to be a hard matchup, but we stayed together and worked hard. We came out with a win like we wanted to.”

Boice shared similar thoughts, as he also gave credit to the entire group.

“It’s just a great way to end our Senior Night. It’s always special to get a win on a night we’re honored,” he said. “It feels like the hard work from our last four years is paying off, so it’s a great way to go out.”