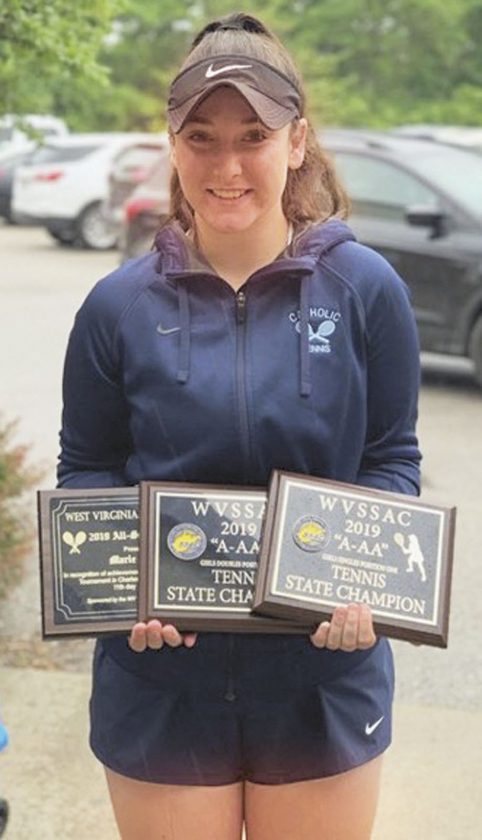 PARKERSBURG — Parkersburg Catholic’s No. 1 girls tennis player Marie Discini used this past offseason to prepare for what she thought would be her best high school season yet.

Shortly after adding a long-awaited No. 1 high school doubles’ state championship to her third straight singles championship won earlier in the day at the state tournament on May 11, 2019, one of the most successful summers in her career began.

From June’s United State Tennis Association’s Midwest Closed, where she beat three girls in the back draw before taking four games off Division I Richmond recruit Carley Cohen in a loss, to reaching her highest rank at tennisrecruiting.com and her highest Universal Tennis Rating, Discini’s accomplishments earned her a third star in the recruiting process.

“I am a lot physically stronger thanks to my summer tournaments,” said a motivated Discini. “I really added more fitness and pushed myself. I have been running a lot. As I am headed to play NCAA Division I tennis next season working on footwork and improving there makes you a lot more fit too.”

Coupled with training sessions with her power-hitting friend Zarion Jones along with additional hitting mate Eric Delong and additional serving and agility drills with dad Jason, Discini left the winter months prepared for any situation.

She said Delong, a Marietta College player, continues to push her more than she pushes herself.

“I feel like my game has really improved,” said Discini who already deploys a powerful serve and forehand as her main weapons of attack.

“I am not saying I am going to blow people off the court, but all the results this past summer and winter felt really good.”

But similar to many of her final-year brethren, Discini’s still waiting to show off those improvements. Catholic barely began practice when the novel coronavirus caused the suspension of all high school basketball activities in the state. The Crusaderette remembers being shocked upon hearing the suspension of all spring sports due to the COVID-19 pandemic until April 10. Another possible blow was dealt after W.Va. Governor Jim Justice declared the current closing of school was extended until April 27 in his public address on Wednesday.

This puts her goals of an undefeated career as well as her determination not to lose a single game in any match on ice for now. This includes her drive for a fourth straight state title.

If the season does resume much is unknown about what will transpire including who would present a challenge to the undefeated Crusaderette. Close friend and Huntington St. Joe tennis player Aubrey Heaberlin, who faced Discini in the state final the last three years, now place tennis for the Stevens Institute of Technology. Discini’s state semifinal opponent Wheeling Central player Laina Anderson’s status remains unknown.

Regardless of the doubt, Discini said her level of preparedness will stay the same.

“It won’t worry me because I don’t focus on my opponent. I focus on my game and how it matches up to theirs and what I can do to make the best of it to win,” she said.

On top of her own quest, Discini hopes to lead the Crusader girls’ attempt at back-to-back state championships. Catholic claimed the Class AA/A top prize after a win over defending team champion Winfield in Charleston last May.

“We definitely had a chance. The team got a lot better in the offseason. (No. 2 singles player) Hannah Sprout and (No. 3 singles player) Taylor Islay improved,” she said.

Discini witnessed these heightened abilities during the team’s final practices before the suspension. She also noted each girl has the same genuine hunger and desire to complete the repeat attempt.

“It (the drive) makes you want to get the best out of it even more,” she said.

If her final appearance on a high school tennis court was shaking hands with Charleston Catholic’s duo of Bella Cinco and Evie Bastin after winning the title, Discini said she could rest easy before heading off to St. Francis University in the fall.

“I don’t think I have any regrets. I think everything happened for a reason. If it is not meant for me to win a state title in my fourth year than I was just blessed to win the three I did. I played my best two matches at the state tournament last season and I would be going out on top. I am thankful I achieved all of that,” said Discini.

Instead, her preparations for D-I tennis will continue followed by a summer filled with more work.