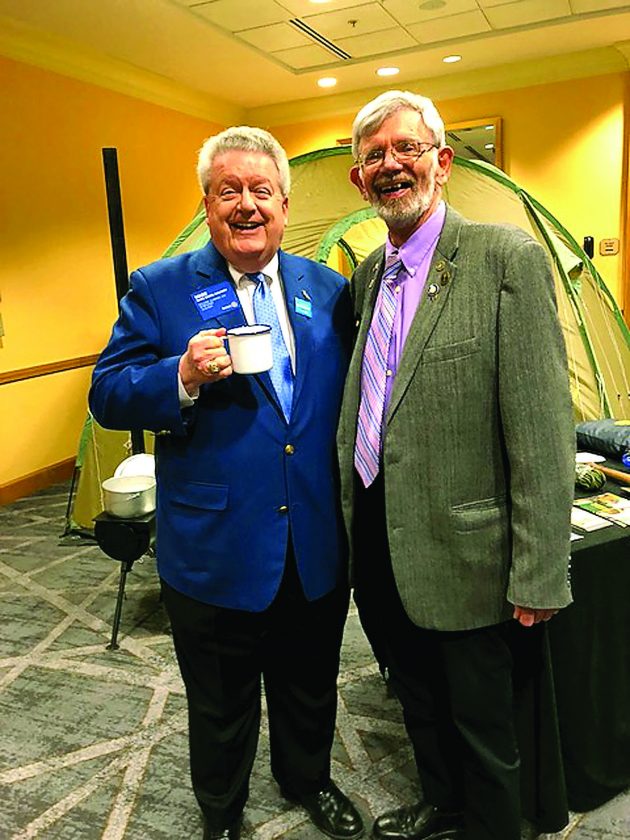 Long-time Rotarian Jack Young had already received the highest award that can be given in Rotary, the “Service above Self” award.

Now he’s been given an award–actually, his fourth-from the highest office in the nation.

Young, a Marietta native, was recently honored with the silver level of the President’s Volunteer Service Award for his work with ShelterBox USA. He also received the bronze level of the award in 2009, 2011 and 2013, but still takes little credit for his volunteer hours.

“I’m just an average guy who did things to help others,” he said.

The national award was created in 2003 to recognize those who contribute a significant amount of time to volunteer activities. Young was nominated by those at ShelterBox, which has worked to provide shelter and supplies to more than 210,000 people in 17 countries affected by natural disaster. Aid comes in the form of family-sized tents and essential tools to repair and rebuild homes, as well as items to use in a shelter, such as cooking sets, solar lights, blankets, water filtration and mosquito nets.

“The lifesaving work of ShelterBox is only possible because of our inspiring volunteers like Jack Young,” said Kerri Murray, president of ShelterBox USA, which is a partner project of Rotary International. “This distinction truly sets him apart as someone committed to serving others and making the world a better place.”

Young said giving back is in his blood, with his family showing him the importance of service as he grew up in Marietta.

Question: How did you get involved with ShelterBox?

Answer: That happened about 2004. Rotary has these zone institutes for potential district governors to go for training sessions…I was invited to one in Indiana and saw a ShelterBox display. I asked about it and they wanted me to get involved. Six months later, they called and asked me to go to a board meeting and I went to see what it was all about. They immediately wanted me to be on the board because they had nobody representing this part of the country. I ended up serving from 2007 to 2014, and usually you only serve for no more than six years. Then I’ve been a board member emeritus since 2015.

It really fits in well with what Rotary tries to do, putting service above self, with volunteers going all over the world and assessing areas where people lost everything to natural disaster. It’s really been one of my passions for the last 10 or 12 years.

Q: When you first heard about the idea, did you think right away that it was important?

A: I thought it was a great idea. My dad was a firefighter in Marietta for 33 years so I had seen people who had lost everything. In the United States, we’ve got the Red Cross and FEMA, but in the rest of the world, what do they do? They’re not as sophisticated.

Q: Have you gotten to go and see these places and the need firsthand?

A: I haven’t been a response team member because I have heart issues and I was advised not to. The boxes weigh about 120 pounds. However, I do think I’ve gotten a chance to see the need. I’m also on the board of American Nicaragua International Hope and Relief Foundation and have been (to Chinnendega, Nicaragua) and seen kids living out of a garbage dump. I’ve been there 11 times and I can appreciate what despair is really about. We don’t know what poverty is in the U.S. We go there and deliver shoe boxes, which are the only Christmas presents these kids get. The program was founded by a Rotarian to see if we could help kids get an education. We get a shoebox and fill it with a toy and school supplies. I’ve been on that board since 2007 and my term runs through 2020.

Q: Where did your passion for doing this kind of work come from?

A: Part of it was my dad being a firefighter, and I was actually a firefighter for four months. In 1965, they had a program where they hired sons and daughters of firefighters to fill in while someone was on vacation. I just couldn’t work on his shift. Then my mom was the secretary of the First Congregational Church and did so much to help others…I was exposed to much of that. My great grandfather, James Roney, was police chief of Marietta around 1900. My dad was a veteran, I’m a veteran…giving service back to the community has always been important to me.

Q: So, that’s always been a consistent part of your life, to give back in one way or another?

A: It has. I can remember through the church, going into the hills of West Virginia to deliver Christmas gifts. It was always taught to me to appreciate what you have. We didn’t have a lot of money but my mom and dad taught me to utilize what you do have.

Q: The ShelterBox program has obviously grown over the years but how else have you seen it change?

A: The biggest change is that we’re trying to respond more to the needs. A box has a tent, sleeping bags, a small stove, but instead of just sending the box we assess everything. Maybe they need the tent or maybe they just need the ground cover. Each disaster is different. In Haiti, we sent over 32,000 ShelterBoxes with everything but if we were responding in Africa maybe they only needed ground cover or tents. The response team talks to the government and to the people in the community. You can’t just rush in there. You have to be invited into the community to truly assess the real needs.

A question I get a lot is if we take those items back once they’re no longer needed. We don’t because it would be too expensive to do that. But also we’ve had documentation of tents and other items passed down from generation to generation and still used. That’s what they’re meant to do.

Q: What does most of the work you do now for ShelterBox consist of?

A: My role now is communicating and educating Rotary clubs, church clubs, scouting groups…helping them understand what it’s like to live in these other countries. Sometimes the tents are better than the shacks they’re living in. They can sustain 110 mph winds. I also go to foundations to get support.

Q: Is there other volunteer work that you’re passionate about right now?

A: In Rotary, we have these things called fellowships…there’s a wine tasting fellowship, a cooking fellowship…I’m the chair for the InterAmerican region for the fellowship of Scouting Rotarians. I promote joining fellowships to connect with people throughout the world.

Q: When did you first join Rotary?

A: I actually did not join in Marietta because there wasn’t a club at the time. I joined in March 1995 in Conneaut, where I was the founder of an assisted living facility. I built it for my mother. I brought her from Marietta and she lived there for two years.

Q: For people who don’t know much about Rotary, would you suggest joining?

A: I always encourage that. It really has helped change my life in serving others.

¯ Parents: The late Charles Young, a captain in the Marietta Fire Department and Vera Haug Young, a 28-year secretary of the First Congregational Church in Marietta.

To donate to ShelterBox USA: