A look at some quirky abodes in the Mid Ohio Valley 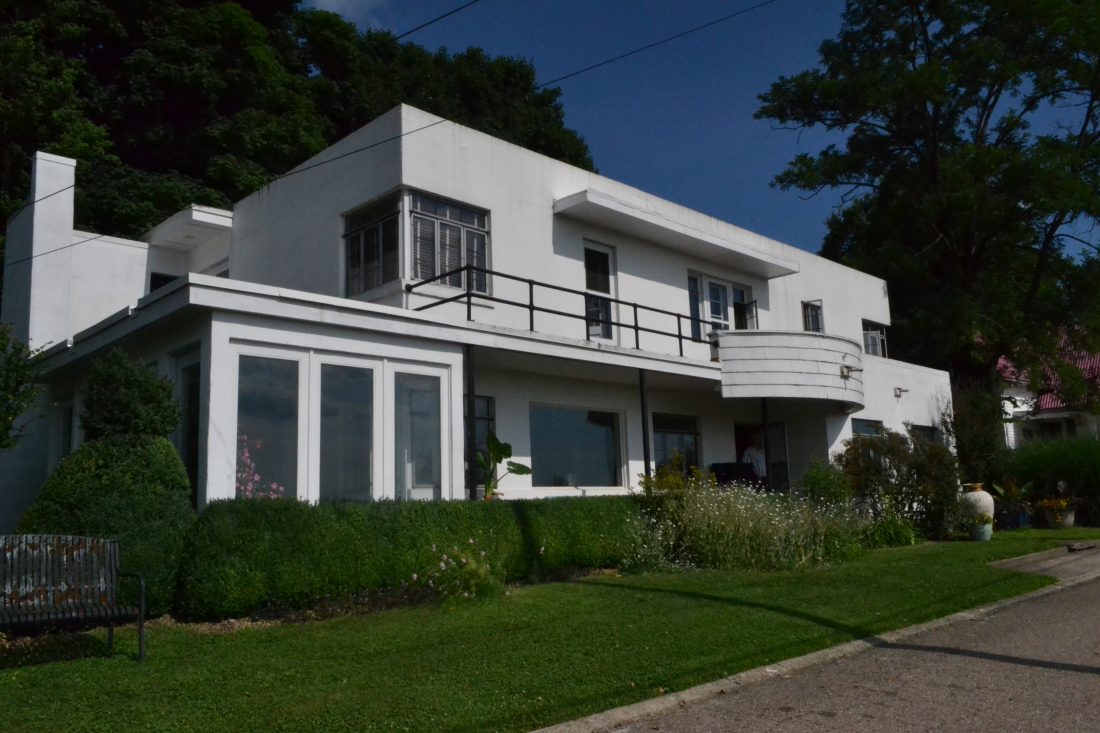 Harley Noland shows the view from the picture window in his living room.

Marietta is known for its diverse architecture and historic homes, but when you look around, you might find both in one building.

Here’s a look at two of the city’s unique homes.

French for “beautiful view,” Bellevue Street on Harmar Hill has a beautiful view in spades. Near the end of the street is a International Moderne-style house built in 1941 for Dr. and Mrs. Harold Oyster by Parkersburg architect C.G. Palmer and Lois Rogers. Current owner Harley Noland said he loves the flat-roofed home for many reasons, and not just the view.

“It’s unique for Marietta. What other house looks like this in Marietta? It’s also a fairly low-maintenance house,” he said, noting he was only the second owner of the home.

The style, which came from an idea to make architecture affordable for all, started in Germany and eventually made its way to the U.S. Homes built in this style contain machine-made parts, including exterior railings, pipes and metal windows. The walls are made of tile block instead of the traditional wood. 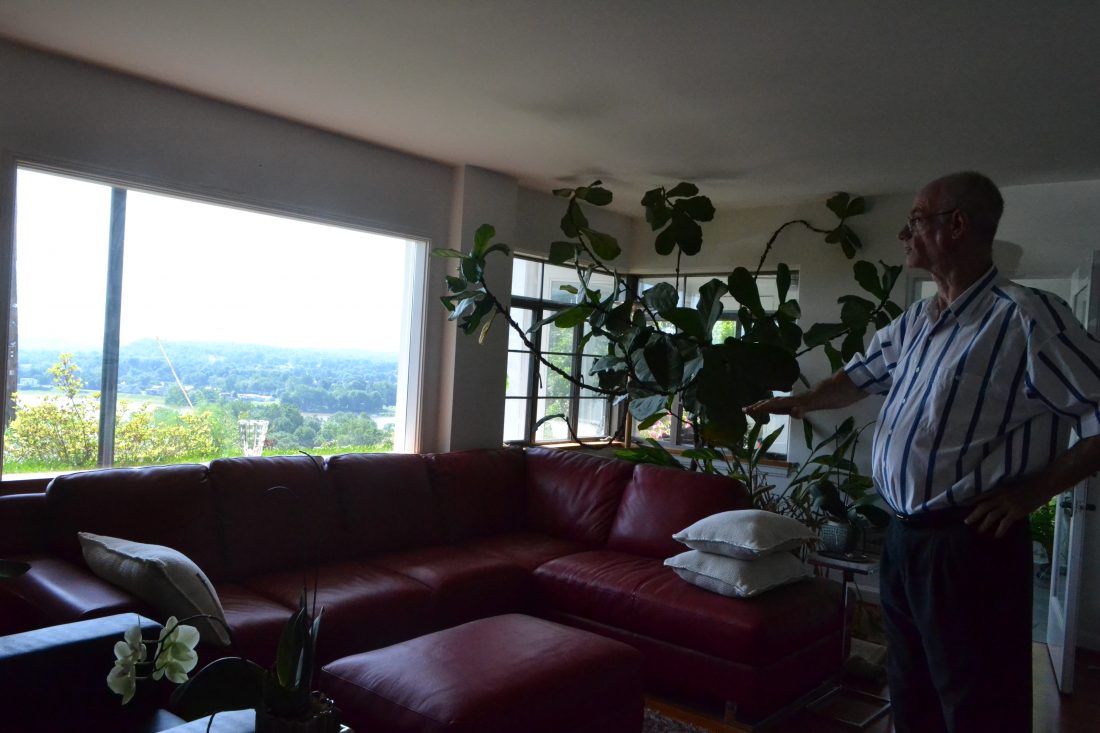 Harley Noland shows the view from the picture window in his living room.

Every floor in the house was originally covered in linoleum, as it was easy to clean.

Oyster’s office on Fourth Street in Marietta was designed by the same architect and has an unusual look with a rounded front made of glass block.

Along with straight lines and a curved second-level porch, the house features glass corners, which not only let in light, but makes the home feel larger. Noland said the glass corners help “visually expand” the feel of the room.

“When all four corners are closed with plaster, it defines in your mind the size of the room,” he explained. “This way you see out past, it visually makes the house seem larger. This is a small house.” 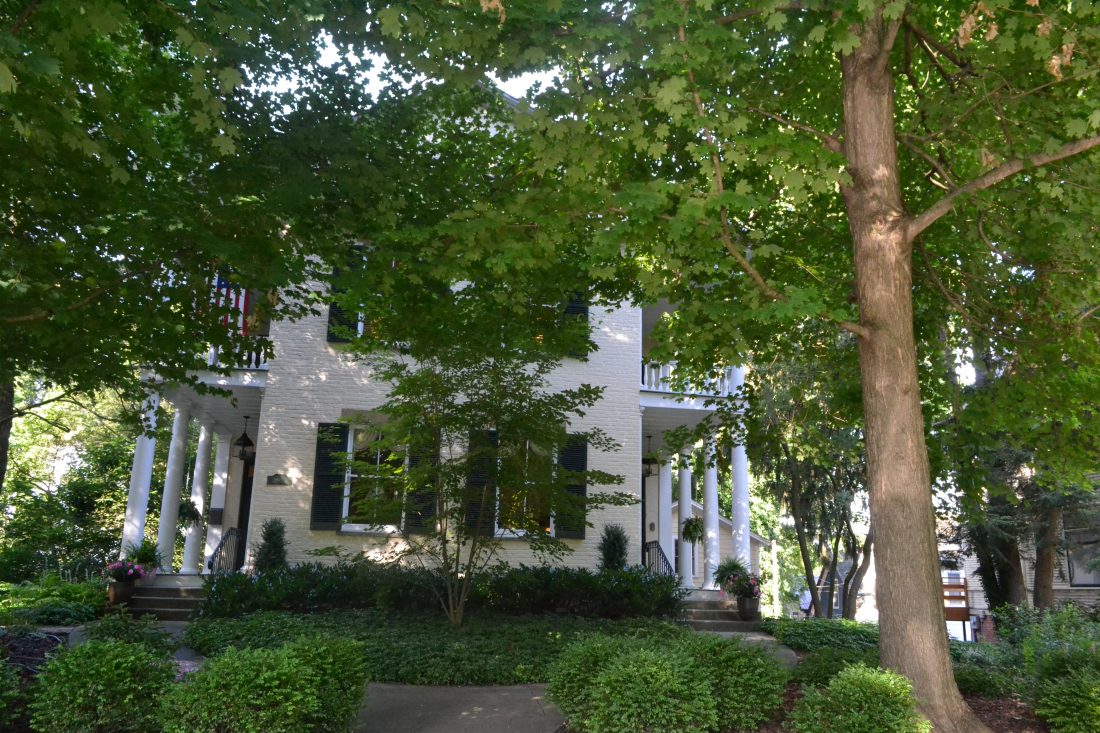 Also, the floor plan house itself is only one room deep.

“That way everyone has a view of the river,” Nolan added. “That’s a reason for building up here. And also, it’s all woodsy, cool back there, so there’s a breeze coming through the house from the west. I hardly ever turn the air conditioner on.”

The living room boasts a large picture window which lets in a lot of light, while allowing for the beautiful view of Marietta from atop Harmar Hill.

Noland said when he bought the house in 1999, he made some changes, as the rooms were tight and enclosed. He took out a hallway where the dining room is now and last year, glass enclosed and enlarged the screened porch into a solarium.

His kitchen was very small, so he renovated it and added stainless steel floors and countertops. 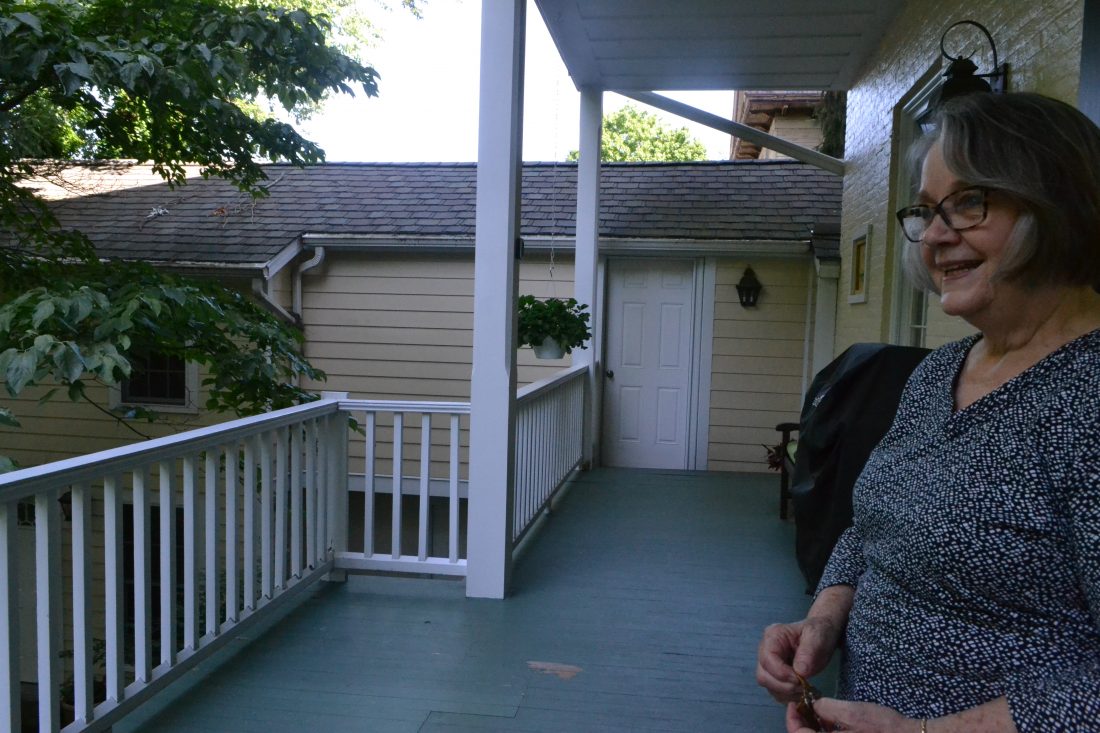 Noland’s degree in architecture has fed his love of Marietta’s unusual buildings. He said he has worked on probably a third of downtown Marietta.

Much like the Bellevue house, the House of Seven Porches has unique architecture while retaining its historical charm.

Currently owned by Charles and Joyce Ditchendorf, the Fifth Street home was completely renovated to make the house livable, but still retain its historic value.

Built by Diara Howe Allen in 1835, the Greek Revival-style house was designed to resemble homes in Charleston, S.C. The Greek Revival homes are very paired and balanced with Doric columns in the front, said Joyce Ditchendorf.

Allen was originally from New Hampshire and went to Dartmouth University. He taught in Charleston for a year and loved the southern architecture. When he moved to Marietta, he became one of the founding professors at Marietta College, teaching mathematics. He purchased the land for the home for $4.97.

Joyce said when they bought the home, it was “at a tipping point” and the last person to own the home wasn’t able to handle the upkeep.

“It was in pretty sad shape, but the bones were good. It was very sound,” she said. “The walls are two feet thick, so it’s very solid and square for its age.”

Renovations began soon after the Ditchendorfs purchased the home, with four months spent just in the demolition phase. They had to take out the old gas lights and add central heat and air conditioning.

All new utilities and ceilings were added to make the space livable, Ditchendorf said. Woodwork had to be replaced and the house originally had the kitchen and dining room in the basement, but they were moved to the main floor.

Their son, Chip, is a local contractor and did much of the project. One of the major tasks he had was to remove the porches from the rear of the house, as they had started to separate from the structure and were unsafe to use. They were then rebuilt to be safer.

“If you are preserving something, you want to do it right,” Joyce said.

Ditchendorf’s love of the home is evident as she brings out a scrapbook of the work done on the house. The internal staircase had to also be removed as its foundation was nothing but dirt floor. Cement foundation was poured to support the structure and a new staircase was built.

The home boasts original floors throughout, bringing a historic part of the home together with the more modern touches the Ditchendorfs have added.

“I think this is one of the oldest houses in Ohio still being lived in and in good shape,” she said.

At the rear of the home is a carriage house, which was “virtually falling apart,” Ditchendorf said. When it was remodeled, the upper level was changed to two bedrooms and a bathroom.

“This was in such bad shape that we decided we had done all this work on the house, we couldn’t have something that was falling apart attached to the house,” she explained.

One of the most unique aspects of the house are the jib doors which lead to the first level porches in the front of the house. They aren’t currently in use because they are hard to open, Ditchendorf said.

“The idea was that you put the window up and then the door would swing around so if you are entertaining during the summer, you’d get good cross-ventilation and people could be on the porch if they overflowed the room,” she explained. “That is a southern feature. I’ve seen that in other southern houses in the Carolinas.”

Ditchendorf said the house has been a wonderful center for their family.