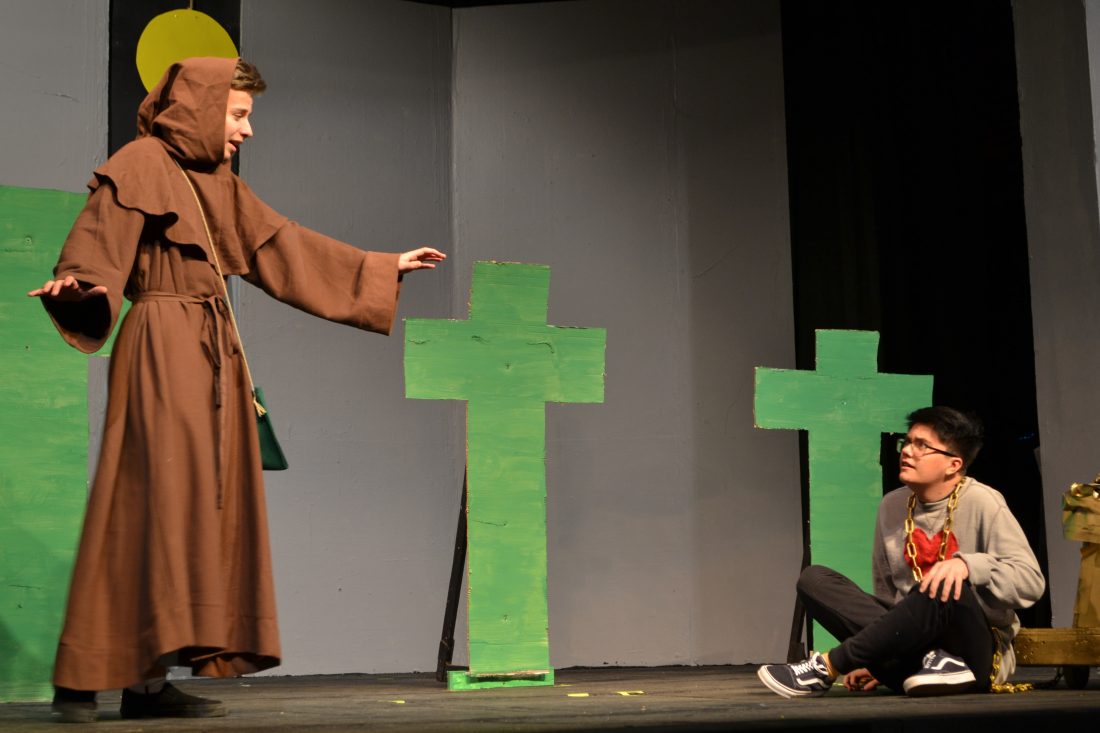 A talented cast of teens, a story of love and revenge, and…squirrels?

The Mid-Ohio Valley Youth Players will present the comedic story of “The Worst High School Play in the World” this weekend at the Players Theatre, 229 Putnam St., Marietta.

Written by William Gleason, “The Worst High School Play in the World” is a play…about a play…within a play. The focus of the medieval play is the land of Saxonia in year 1243 A.D. The king has left his his wife and children behind to join the crusades, while his evil brother, Prince Viscera, plots to take his place. He only needs to get rid of the king’s infant son, Ivanha, first.

Director JR Wells laughed when asked for a synopsis of the play.

“It is a play taking…so you have a medieval play taking place and you have the story of that. The prince is dropped off in the woods, is raised by squirrels and comes back to get his throne back,” Wells explained. “That’s that part of it. Then it’s a play going on where you have a director and sound people and things aren’t going right. You have two kind of things…a play not going right, and then the play itself.”

He said in the beginning of the play, you’ll hear the director encouraging the students behind the curtains.

“You get to see this is supposed to go on without the audience knowing, and there are all the mistakes and things fall apart,” he added.

Chase Myers, 17, who attends both Marietta High School and Washington State Community College, plays the grown Ivanha. He said he wasn’t sure about the play when he first read it.

This isn’t his first play, as he’s been involved in theater since the sixth grade.

“It’s a great laugh. We have a talented cast of young kids that will be able to do amazing things when they get older,” he said. “It’s just enjoyable and a good time.”

The all-teen cast has students from all over Washington County, as well as some schools in Wood County. A Marietta High School exchange student from Estonia, Kenzo Brauer, plays Friar Fred. The character teaches the grown Ivanha to be more human.

Wells said Brauer isn’t the first exchange student to participate in youth productions at the theater.

“We’ve had two boys from Asia, China and Korea. We’ve had one from Brazil. We’ve had students from Europe, Germany, Belgium, Sweden and Italy,” Wells said. “And now Estonia.”

Brauer, 16, said he wanted to study in America because he’s always been interested in other cultures.

“Back in Estonia, I was in the theater studio, and we did plays,” he said. “I’ve always been interested in theater and dance, so it was a natural choice.”

He has two roles in the play – Friar Fred in the medieval play and a stagehand in the modern play.

“Friar Fred is the father who is basically teaching the ways of man to the main character, Ivanha. I’m one of the ones rescuing him,” he explained.

He said this production is unlike any play he’s done before.

Every good guy has a bad guy as a counterpart, and the bad guy in this play is Prince Viscera. Viscera, played by 15-year-old Isaac Jones of Waterford High School, is the character who wants to kill the infant Ivanha to take the throne.

He likens the play to one that might be produced by a long-standing British comedy troupe.

“It’s sort of like Monty Python, that’s what it’s like for me when I read the script,” Jones said. “I thought ‘I’m going to love this’ and I do. It mirrors (Monty Python) in a lot of ways.”

New to the youth players this year is the MOVP Youth Scholarship. There will be a 50/50 raffle during each intermission at each performance and the concession stand and proceeds will go to the scholarship fund. A high school graduate who participated in a junior or youth players production will receive a scholarship to the college of their choice.

¯ What: December production of “The Worst High School Play in the World.”