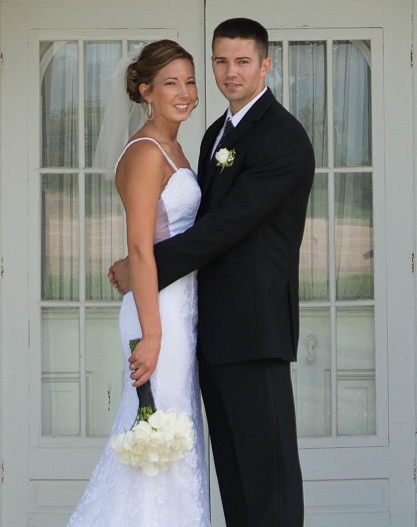 Ashleigh Tornes, daughter of Randy and Jean Tornes of Waterford, and Brandon Hendershot, son of Bernard and Lynlee Hendershot of Waterford, were united in marriage at 6 p.m. July 15, 2016 at St. John the Baptist Catholic Church in Churchtown. Father Dale Tornes and Father Virgil Reischman officiated the private, double-ring ceremony. The bride was given/presented in marriage by her father.

A Waterford High School and Marietta College graduate, the bride is a second-grade teacher at Warren Elementary School. She is the granddaughter of Virgil and Martha Huck, Charles Tornes, Larry and Sandra Harris.

The bridegroom also graduated from Waterford High School and Marietta College and is an accountant at the Bureau of Fiscal Service. He is the grandson of John and Elizabeth Rubrake, Patsy Hendershot and the late Jack Hendershot.

A reception was held at the K of C Hall in Churchtown.

The couple took a wedding trip to Kauai, Hawaii, and plan to reside in Waterford.