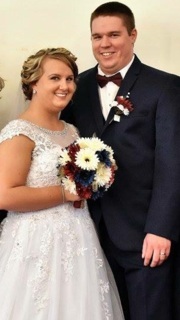 Together with their family and friends, Tabitha Dawn Thomas and Justin Allan Brookover were united in marriage on Sept. 23, 2017 at Newport Baptist Church in Newport. The ceremony was officiated by Pastor Doug Brown.

The bride is the daughter of Jeff and Cindy Thomas of Newport. The groom is the son of Jack and Sheryl of Waverly, W.Va.

The couple resides in Waverly, W.Va.