How it Works: Science of Beer 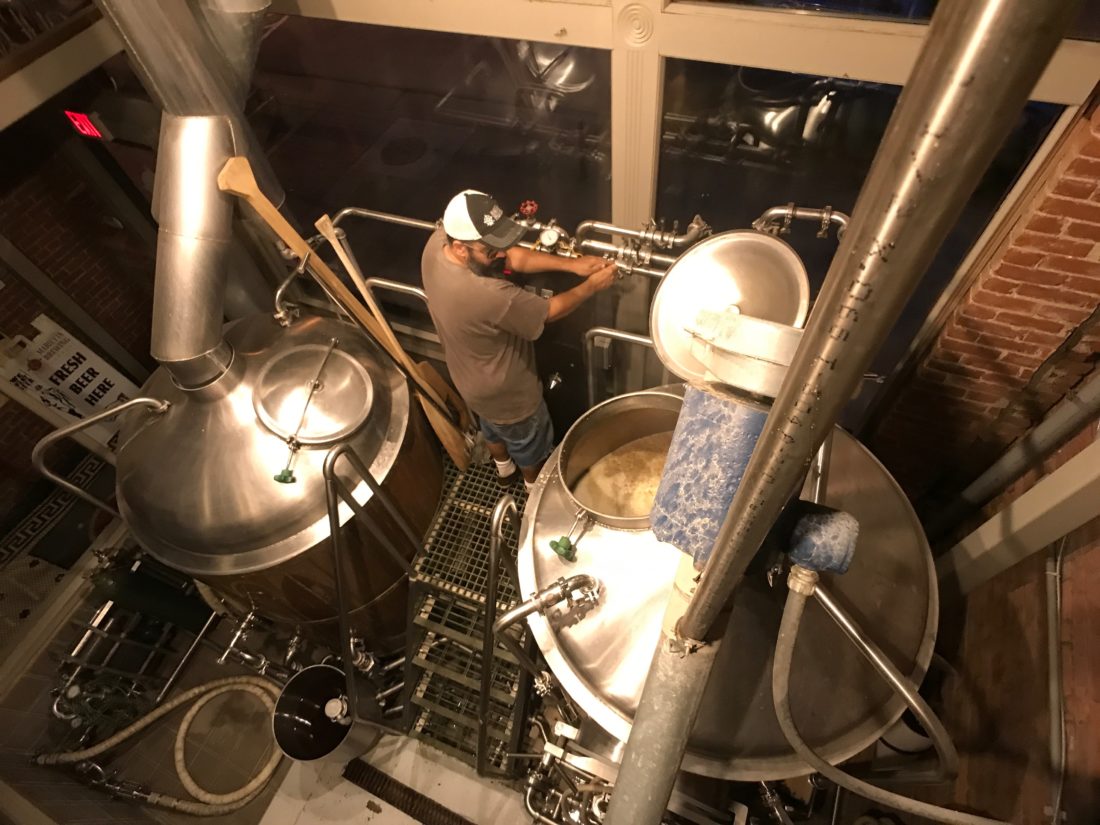 JANELLE PATTERSON The Marietta Times Charis Hopkins, brewer for the Marietta Brewing Company, checks on the wort while brewing beer in the early morning hours Thursday.

At least once a week before the sun rises, the brewery smells like a bakery.

“It’s the malted barley as the hot water is opening up that grain,” explained Chris Hopkins, 38, of Parkersburg. “It smells like breakfast. I tell people it looks like Grape-Nuts.”

“It’s really the same process that’s been passed down for hundreds of years,” he said. “It’s just become more consistent with the newer technology.”

Hopkins is chipper, after a coffee and time to himself listening to music and the news. Plus, he has the brick building all to himself on the quiet street. 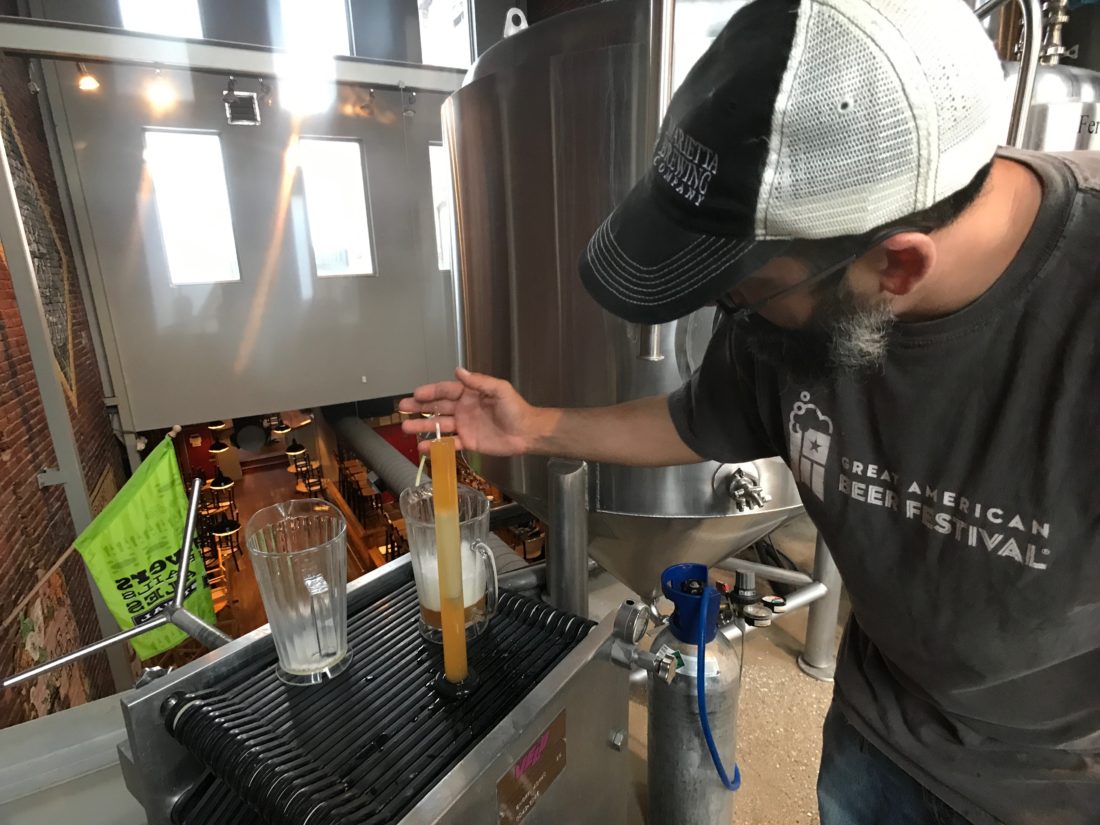 “I really think I have the best job around,” he said. “I work for two breweries and both Joe (Roedersheimer, owner of the North End Tavern in Parkersburg) and Tony allow me to do this. They’re more like partners even though they’re competitors.”

Tony Styer, owner of the brewing company, said the arrangment works sharing a brewer because the two establishments don’t sell across state lines.

“We’re in different markets so it’s worked out,” said Styer. “And Chris has a really great work ethic, with zero supervision. We’re like ships passing in the night. I hardly see him.”

Awake and focused, Hopkins begins to brew at MBC around 4:15 a.m.

“It starts with pre-milled barley,” explained Hopkins. “Typically the day before I’ll come in and make sure my fermenter is clean–it’s where the magic happens — and I’ll bring my hops and the barley I’m using for that beer in and get it all set up.” 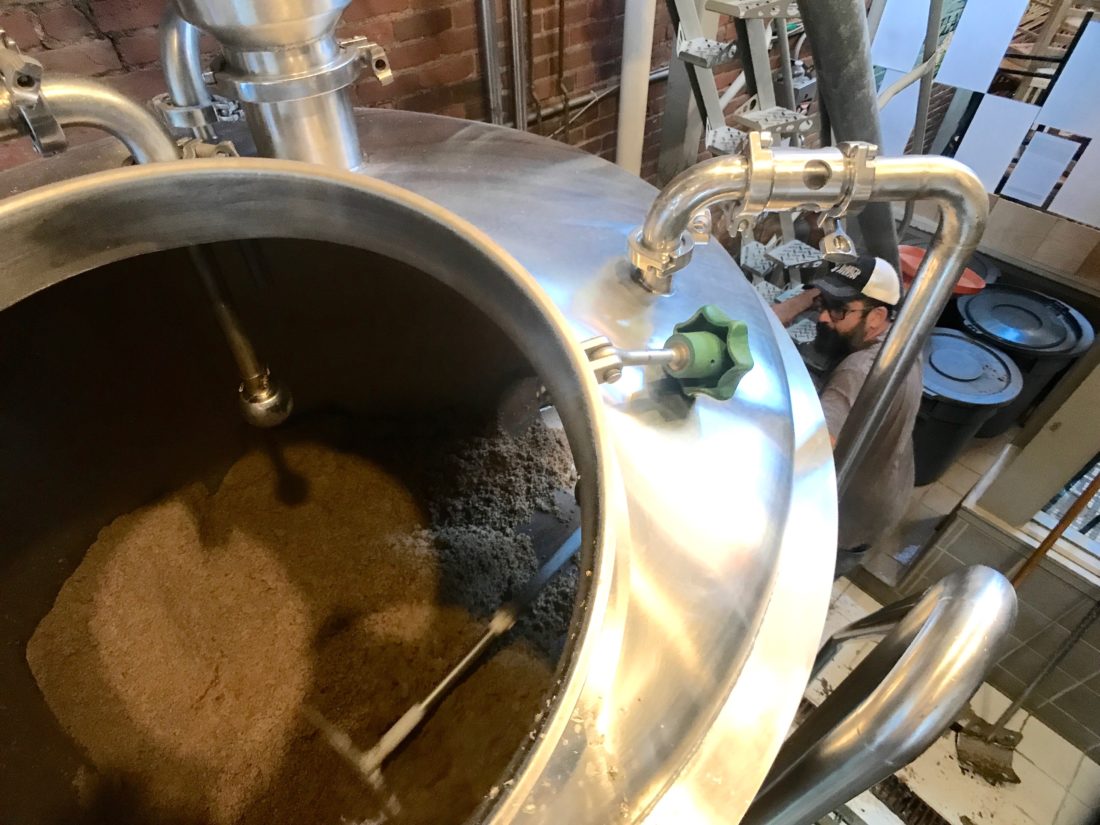 Then in the pre-dawn hours he begins watering the mash tank, getting hot water an inch above screens in the tank before adding the malted barley to the mix through the auger.

“So I’ll start it up, there’s a screw auger in there that moves the dry barley and sends it up into the mash tank,” he said. “Your mash temperatures are typically between 148 and 153 degrees depending on what beer it is that I’m doing.”

Once the hot water, about 15 degrees warmer than the planned temperature to make up for the room-temperature barley, is added to the right level and there are no visible clumps the next phase begins.

“Depending on the beer the mash time varies. For some beers it’s 90 minutes, some beers it’s 60 minutes,” explained the brewer. “Once that time is up, I start recirculating it, taking that now sugar water, or wort, and draining it out and putting it back in at the top of the tank.”

The recirculation improves the quality of the beer, drawing out the sugar enzymes in the barley that the yeast later in the process will eventually feed on. 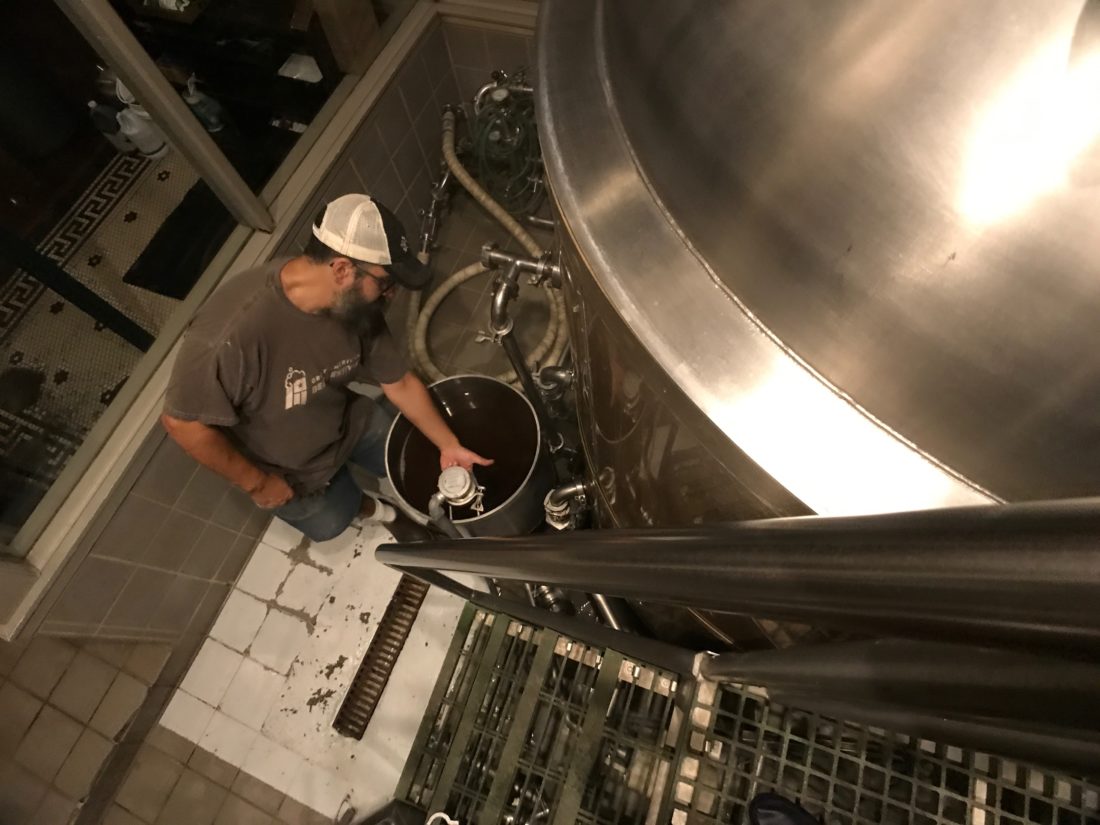 “The long starch chains break down into short starch chains, so essentially we’re making sugar,” he said. “We’re invoking a natural enzyme in the malted barley .”

And the barley acts as a filter as well while the starches within are converted.

“We’re getting this grain to settle on the bottom to create a filter bed so that you’re not getting any schmutz in it,” Hopkins explained. “The clearer I can make the wort now, the easier it is to filter at the end.”

Recirculation or vorlauf lasts for 15 to 20 minutes. Then the wort is checked for clarity.

“Once we get the wort to where we want it to be I’ll close one valve and open the valve on the the kettle and it will start pumping into the brew kettle,” he said.

That wort is followed from behind by a process called sparging, where hot water is pushed through the grain bed, pulling the last of the sugars from the barley into the brew kettle.

Then the wort is brought to a boil in the second tank, at around 208 degrees before the first round of hops are added.

“After I’m done boiling, I’ll whirlpool it to move the sediment into the center and run the liquid through a plate heat exchanger,” said Hopkins, noting the hot temperatures he’s working with. “It will go in at about 110 degrees and come out at about 71 degrees and go up to the fermentation tank.”

Fermentation, with yeast brought in from a previous batch, lasts about a week.

“That’s where the alcohol is actually made…the yeast eats the sugars and produces (carbon dioxide) and ethanol,” he said. “You check on it throughout the week and know it’s about done fermenting when it stops bubbling.”

But that’s not the end of the road for the new brew.

The process from dry barley to tap takes about four weeks, with the most intensive labor done over the course of five hours in three days, then fermentation for about a week

But then there’s the conditioning.

“That’s where your final flavors and aromas are added, the dry hopping or the raspberry puree,” Hopkins said. “It’s like when you cook, if you add the herbs at the beginning you may get hints of them in the dish, but if they’re not added until the end the taste is more sharp.”

Conditioning can last anywhere between 10 days and three weeks, before the now fresh beer is filtered and pumped over the bar and directly into the fridge where the taps are linked.

“This is a seven-barrel system and there are about two kegs in a barrel,” explained Hopkins. “So I’m making about one batch a week and then the rest of the week I’m coming in the mornings to clean the lines and prepare for the next round.”

Hopkins got his start in brewing young and was first recognized for his skill in the craft at 18.

“It was illegal to purchase beer in high school but not the home brew kits,” he explained. “So I would try whatever came to mind and got pretty good at it. They were hesitant to recognize me in that home-brew contest but they liked what I made enough that I won.”

Then after he turned 21 he studied the trade officially in Chicago.

“That was mostly bookwork and learning about the processes and equipment,” explained Hopkins. “There were also some workshops and labs, but after that I went out west for my apprenticeship.”

After a few more moves and experience brewing brought him back to the Mid-Ohio Valley, he finally settled with the artistry and chemistry of brewing for not one, but two local breweries.

“More and more people are interested in having locally-sourced, locally-brewed beers so it’s almost a partnership to get to try out different ideas at both places, even if they think I’m crazy they trust that I know what I’m doing,” Hopkins said.

Styer said Hopkins has been an invaluable part of the team from early on.

“We bought this place and we didn’t really have a brewer,” explained the MBC owner, “Chris came in about six months into that and it wasn’t long before we brought him on full time. You wouldn’t know it’s the same brewer for (Marietta Brewing Company and the North End Tavern), he keeps the tastes true to the each of the pubs.”

1. Pre-milled malted barley is poured into a mash tank through a screw auger.

2. Hot water is added at the same rate that the barley falls into the mash tank to keep the grains from clumping.

4. The wort is sent through a vorlauf for recirculation.

5. The wort is pumped to the brew kettle, followed from behind with the sparging process.

6. That combined wort and hot water from the sparging is then brought to a boil and hops are added.

7. The liquid is passed through a plate heat exchanger and pumped up into one of four fermentation tanks on a loft above the first two tanks.

8. Fermentation lasts about a week.

9. Additional hops and flavors are added and the alcohol is conditioned for up to three weeks before it is filtered and pumped into refrigerated casks which directly feed tap lines at the bar. 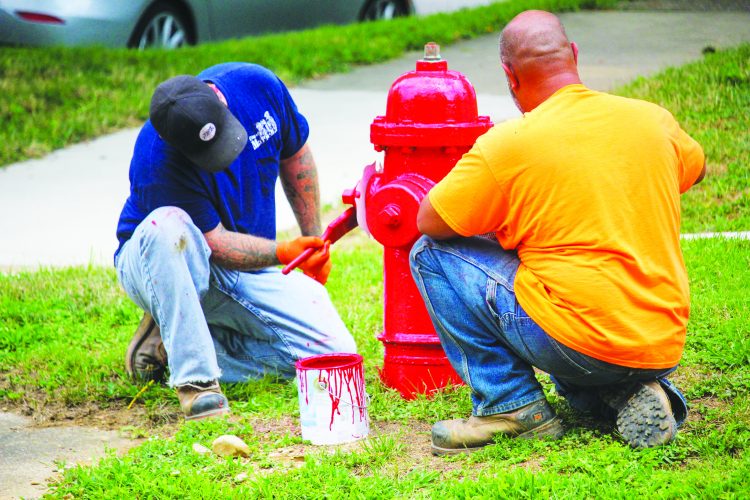