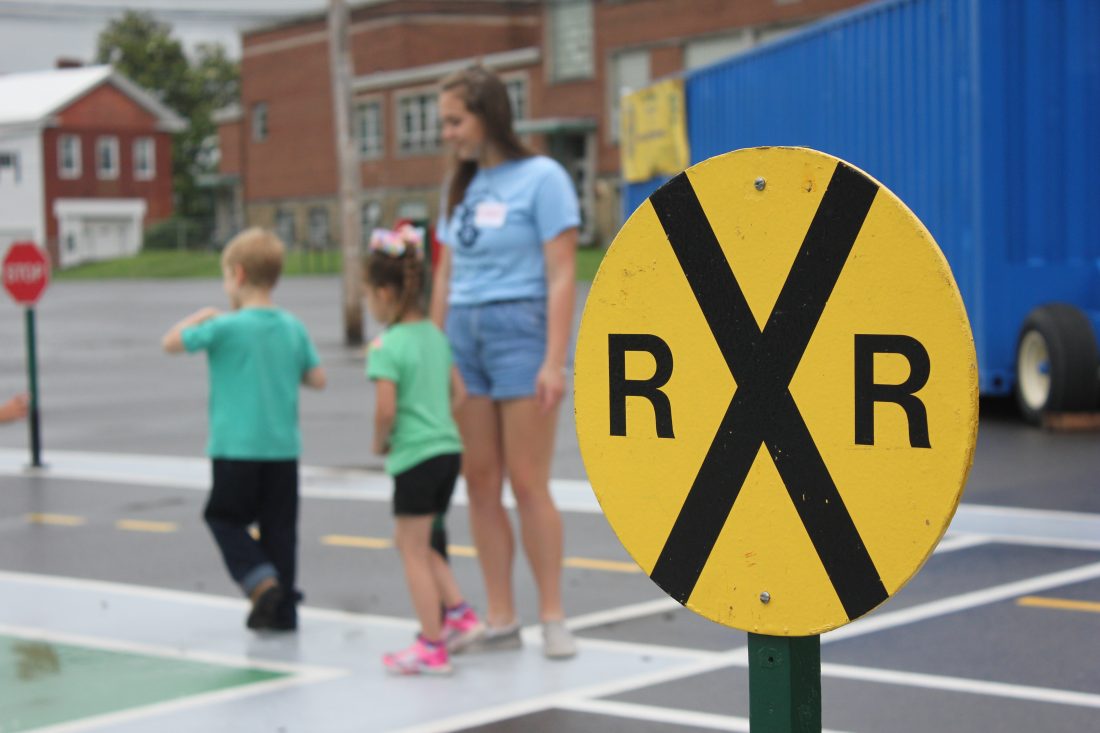 JANELLE PATTERSON The Marietta Times Rising kindergarten students will learn this week how to protect themselves from automobiles, trains and strangers during Safetytown. On Monday, Celia Minard, center, briefly talked with students about the railroad crossing sign at Harmar Elementary during outdoor lessons.

Between 10 and 20 people in Ohio are likely to die from injuries on a railroad track each year.

That’s been the trend according to the Federal Railroad Administration for the last decade with only two years of outliers–2010 and 2011–and the majority of those deaths each year occur on CSX tracks in the state. CSX has the most lines of the six companies owning tracks throughout the state.

A Washington County employee was struck and killed by a train at the beginning of June, making the fourth death of the year on tracks in the state, the third on CSX lines.

But accidents on lines are more common than many realize, with other instances this year resulting in non-fatal injuries for three more individuals–accidents ranging from injury while walking on train tracks, getting caught/crushed or jumping off tracks.

“We have always talked about railroad safety here,” noted Cheryl Cook, Harmar Elementary principal, as Safetytown kicked off Monday at the school for rising Marietta kindergarteners. “We have a patrolman come in and talk about what happens if you’re on the tracks in a car when a train is coming, what you do at a train crossing, especially with the tragedy that just happened a couple of weeks ago, it’s so important.”

Washington County Sheriff’s Deputy Logan Schwendeman is teaching that lesson this week for the students but hopes the same lessons are remembered across the county.

“Basically we go over the general size of the trains versus you or a car and how long it takes them to stop, that they can’t just hit the brakes or swerve like in a car,” said Schwendeman. “But especially in light of the recent accident, the biggest thing we talk about is avoiding the tracks. At the end of the day, we’re trying to educate them on the safety factors that are completely in their control. Trains have one lane, and that’s it.”

Washington County Sheriff Larry Mincks said the June 3 accident which resulted in the death of Michael Douglas, 52, of Marietta, is still under investigation. Douglas was on a rail bridge that crosses Devol’s Run when the northbound, 18-car freight came into view. He was unable to get off the bridge before the train hit him.

But the Federal Rail Administration says if a train is traveling faster than 60 mph, engineers are not required to sound the horn until it is within a quarter-mile of the crossing, even if the advance warning is less than 15 seconds.

And sound can be deceiving, according to the FRA, which notes that in many geographic locations, and during much of the year, motor vehicles operate with windows rolled up, air conditioning systems and radios in use. Therefore, audible warning signals must be sufficiently loud to be perceived.

Modern trains are also quieter than they used to be and quieter than many people may think. They glide with lower friction than steam engines and if they pass through a corridor of trees, the trees suppress the noise.

A train idling can be compared to the sound of a car zooming by at 70 mph, a loud voice or the sounds of a running blender.

Rail cars moving at 50 mph may only be perceived as loud as a muffled diesel truck passing by your home outside, a shout, or shop tools running.

With horns blaring, the loudest nearby registration of that sound would compare to that of low flying aircraft or emergency vehicle sirens.

“So we talk about how these bridges and train tunnels are only built big enough for that train, that there are no sidewalks in there or on the bridges,” said Schwendeman. “We have trains that go all around this area though, and some will walk across tracks on their way to school so we’ll talk about being safe at crossings and that if you’re in the middle of the tracks when the arms start to go down to get across as fast as you can.”

He said if a car or bus were to break down on a rail, all individuals should clear the area.

“Get out of it and get away from the tracks because that engine could cause an explosion or scraps of metal could go flying in a collision,” he said.

• Be prepared to stop at the crossing.

• Slow down, look both ways and listen.

• Understand the signs and warning devices.

• Check that you have enough room on the other side of the tracks for your vehicle to cross safely.

• Stay alert–it is easy to get distracted, especially by phones, music and conversation.

• Stop, look both ways and listen.

• Cross tracks only at designated pedestrian or roadway crossings.

• Cross at a 90-degree angle if crossing with a bike, stroller, or wheelchair, as your wheels can become stuck.