Fall foliage a bit of a bust this year

Leaves slow to change due to higher temps, dry weather 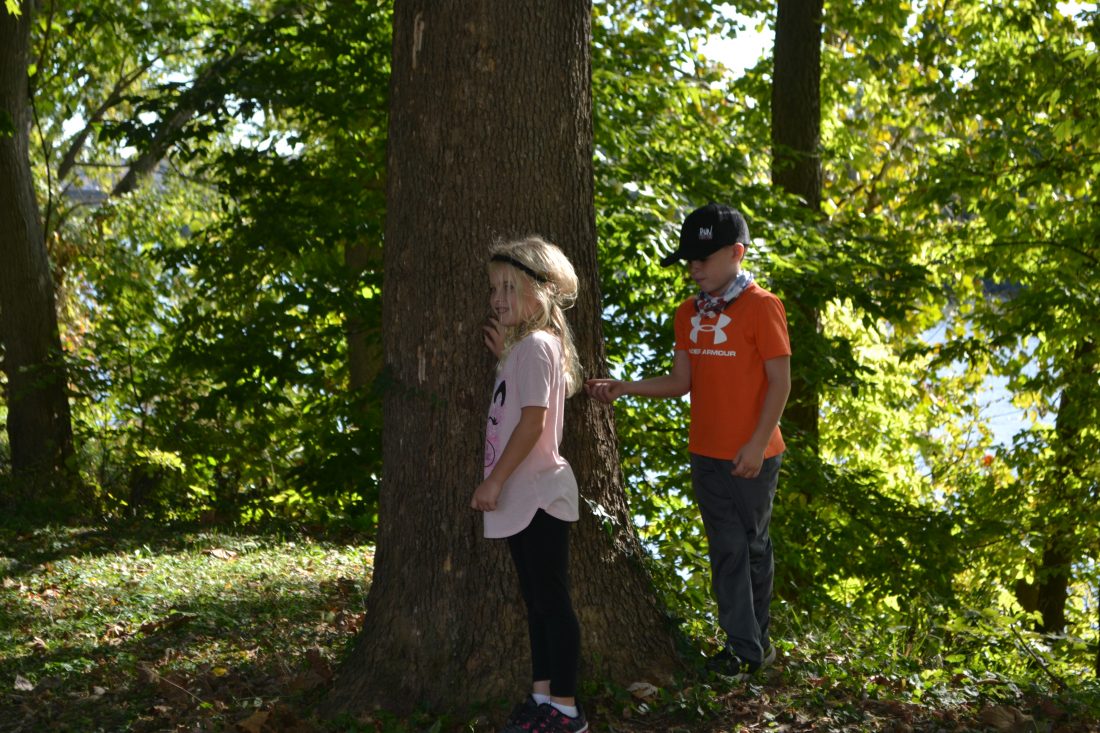 Photo by Michele Newbanks Kyrian Clatterbuck, 6, and her brother Peyton, 8, played under the trees at Muskingum Park Monday afternoon. The trees are expected to finally turn from green in the coming days.

It’s the time of year when the trees are usually bright with red, orange and yellow leaves.

This autumn, Washington County hasn’t seen much of that yet.

Greg Smith, fall color forester with the Ohio Department of Natural Resources, said the extended summer and long stretch with no rain has muted the colors of leaves this year.

“The long extended summer with high temperatures stressed out the trees,” Smith said. “In urban settings and along the edges of woods, we’ve seen them start to turn color.”

Peak will be a little later than normal this year, and likely not as vibrant.

He said in the urban setting where there are sidewalks and not much grass, the trees are more stressed than ever.

“It’s stressful because of the lack of moisture. It’s more of a harsh environment,” he said. “They don’t have as much access to water and shade. They may have exhibited stress more than those in the woods.”

He said whether or not the tree leaves have changed colors, the leaves have been dropping as a defense mechanism to conserve moisture.

Smith said the colors are triggered by longer nights.

“Ideally in that recipe, we’d have bright sunny days and cool temperatures at night with some moisture. That’s the best scenario,” he explained. “The colors come through because with the longer nights, the chlorophyll in the green leaves stops being produced. The chlorophyll provides food for the plant. As the green fades, some of the other colors in the leaves are unmasked.”

Smith said in this ideal situation, more sugar would be produced in the leaves and the colors would be brighter.

“With a long dry period like this summer, we get less brilliant colors and less range of color,” he explained. “Every species of tree is different. Some may have a little different amount of pigments in their leaves.”

It is the pigment that is unmasked with the fading of the green in the leaves, he added. The pigment is what makes the leaves the different colors.

“For instance, sugar maples have red, orange and yellow mixed together and they are brilliant,” Smith said. “Some species may have more of one pigment than another.”

The ODNR uses prediction models to find the peak season for fall leaves.

“The prediction models are saying the last week of October,” Smith said. “We’re getting closer, but not quite there. They should be at least near peak.”

Cigi Painter of Marietta was at Muskingum Park Monday afternoon with her niece and nephew. Peyton Clatterbuck, 8, and his sister, Kyrian Clatterbuck, 6, attend Warren Local Schools and were out of school on a Teacher Professional Day.

“When it’s nice, we like to come to the park. I knew it would be 80 degrees and we were not going to not take advantage of it,” she said. “We’re having a picnic.”

Painter said she was not shocked by the leaves still being green this late in the season.

“We were harvesting from the garden the second week of October last year,” she said.

While next week is predicted to be the peak season for fall foliage, many like to get out and see the burst trees.

For those who enjoy seeing the bursts of colors in the trees, there are a few driving paths the ODNR suggests.