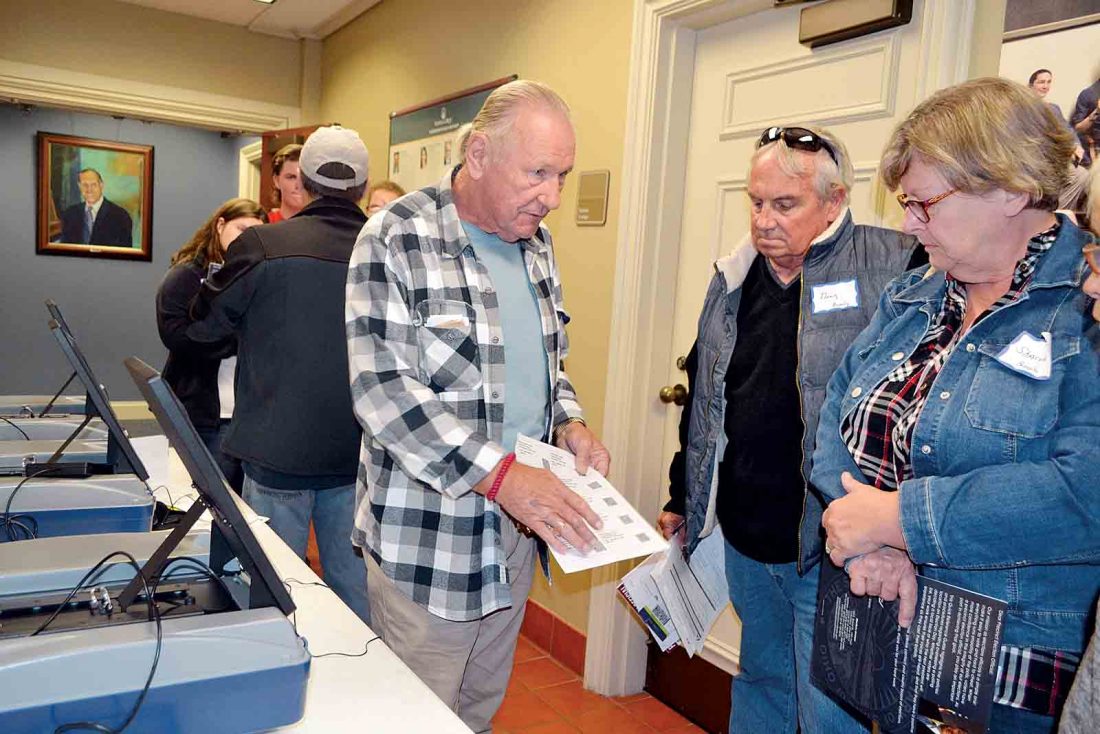 Jedd Butler of Newport shows Doug and Sharon Washburn of Lowell how to use the Freedom vote machines Wednesday during a training session. (Photo by Michele Newbanks)

Poll workers got a chance to learn about the new voting machines Wednesday night at Marietta College’s McDonough Auditorium.

Peggy Byers, deputy director for the Washington County Board of Elections, said the new machines are very easy to use.

‘There’s a new electronic poll book that checks you in,” she said. “It’s like an iPad, and so is the Freedom vote. They are very intuitive.”

The Freedom vote is where county residents will make their choices for each race, although the votes don’t count unless they are run through a tabulator.

Byers said if a voter makes a mistake in choosing a candidate, they will have a chance to re-do their ballot. The machines are designed to catch if a voter skipped a race or didn’t vote for enough people.

“What we think is so great is on paper ballots, voters could put an X in the box or lay their pen down and put a dot there,” she said. “Unless we audited them, you wouldn’t know if the vote was counted. It protects the voters from not having their votes counted.”

She said the voter’s ballot is printed out and they will have a chance to check it before it is run through the tabulator. Voters will have three chances to get their ballots correct.

“You can go back to the poll worker and tell them you messed up the ballot,” she explained. “Until you put your ballot through the machine, your votes have not been counted.”

She said the board of elections has received some reviews from early voters on the new machines.

“With the early voting we’re doing here, we have heard a lot of positive comments,” she said. “Even people that don’t like computers think they aren’t hard to use at all. These things are very intuitive and easy to use.”

Before Wednesday’s session started, poll workers were given the chance to see the Freedom vote machine and learn how it works from Jedd Butler of Newport. He said he’s been on the setup crew for elections for at least 10 years.

He said the new voting machines will be used throughout the county, but the tabulator will also read paper ballots if necessary.

“Paper ballots are still used,” he explained. “You just pull up and honk your car horn and a Republican and Democrat will come out with a paper ballot and get your vote.”

Butler has worked election days for many years, but for some, this is their first election.

“I was talking to Peggy (Byers) and I saw in the paper that they needed volunteers, so I decided to volunteer,” said Marietta Township resident Candy Nelson. “This is my first year. I’ve never done this before.”

Others are old hats at working Election Day.

Aaron Weihl of Marietta will be working the polls at the Washington County Fairgrounds.

“This is my seventh year. I’m going to get to see some of my neighbors since I’ll vote at the same poll I live at,” he said.

He said he got to be a poll worker when he updated his voter registration.

“I had to go online to update my voter registration and there was a check box to be a poll worker,” he explained. “So I checked the box.”

NEW MATAMORAS — While Aug. 19 is still the tentative start date for in-person class in the Frontier Local ...

Marietta board prepares to put building levy on the ballot again

The bond issue which offers Marietta City Schools to unify under a single-campus model is on track to be back on ... 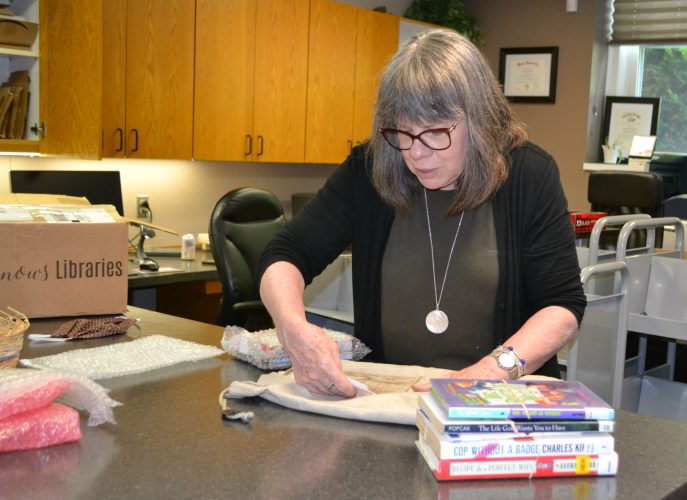 The Right Path for Washington County, along with community partners, will provide free fresh fruits and vegetables ...