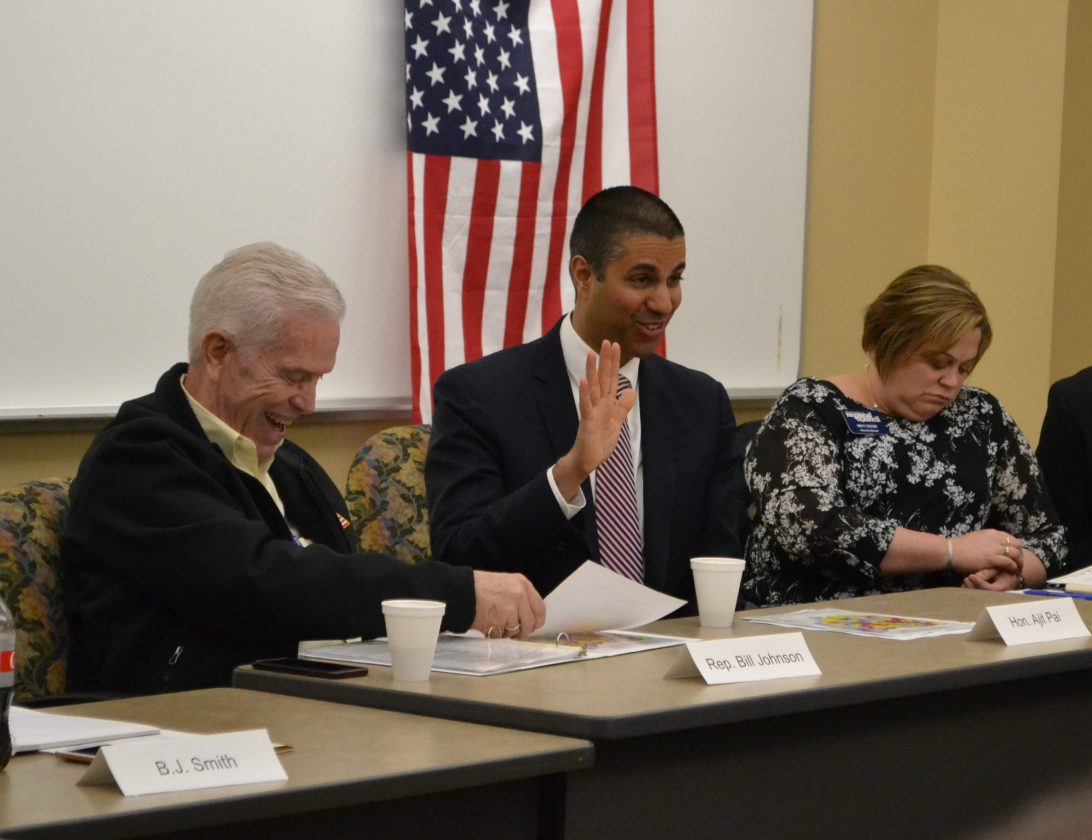 Local dignitaries, along with U.S. Rep. Bill Johnson, R-Ohio, and FCC Chairman Ajit Pai, met in Marietta to discuss the importance to Southeastern Ohio’s rural communities of having broadband access.

The program targets residences and businesses that currently do not have broadband service, which is a vitally important issue, said Johnson.

“Businesses will not come into a region if they can’t access the internet,” he said. “Health providers can’t offer tele-health without internet service.”

Johnson noted the RDOF’s priority is unserved and underserved communities. He said there were 215,000 eligible points in his own district in Ohio.

Pai, who is from small-town Parsons, Kansas, said he is well aware of the limitations of an area without broadband access.

The RDOF is the biggest step the FCC has taken to close the digital divide.

The FCC report for the RDOF order said the fund will use competitive bidding to inject $20.4 billion into high-speed broadband networks in rural America over the next decade. Those areas lack access to 25/3 broadband service, connecting Americans in a cost-effective manner.

At least $4.4 billion will be allocated for the second phase for the unserved areas and areas not won through the bid process in phase 1.

The idea is to increase the minimum speed to 25/3 Mbps from 10/1 Mbps many areas currently have. The 25/3 means there will be 25 Mbps speed downloading and 3 Mbps speed uploading.

Attendees Wednesday were asked how having broadband access would positively impact their businesses or organizations.

Andy Kuhn, executive director of the Southeastern Ohio Port Authority, said they sometimes have to set information to download overnight so it will be ready for a meeting the next morning.

Johnson said where generations of technology used to change every 10 years, now it changes every six months.

“As people move out, they move to places with broadband connections, and they aren’t moving back,” he said.

Pai said the RDOF would be divided into two phases. Phase 1 will cost $16 billion and will target areas with no broadband access.

Pai said part of phase 2 will be data collection.

“We’ll collect information from providers as a map may show an area has service, but they don’t in reality,” he explained.

He said bids can come in from a variety of sources, including cable, electric co-ops or telephone service providers.

“I don’t care where it comes from, as long as people get broadband,” Pai said, noting whichever provider offers the higher speed will automatically win the bid.

He said faster broadband will be needed for areas like telemedicine, where a hospital in a rural area would be able to have a doctor in a rural hospital evaluate a patient.

“They will be able to see in real time to evaluate a patient,” he explained, noting this would be especially need in cases of possible strokes, where time is of the essence.

• Discussed were the challenges and importance of having broadband access to rural communities.

• Details were given about a $20.4 billion Rural Digital Opportunity Fund, which will target homes and small businesses that lack modern broadband service.