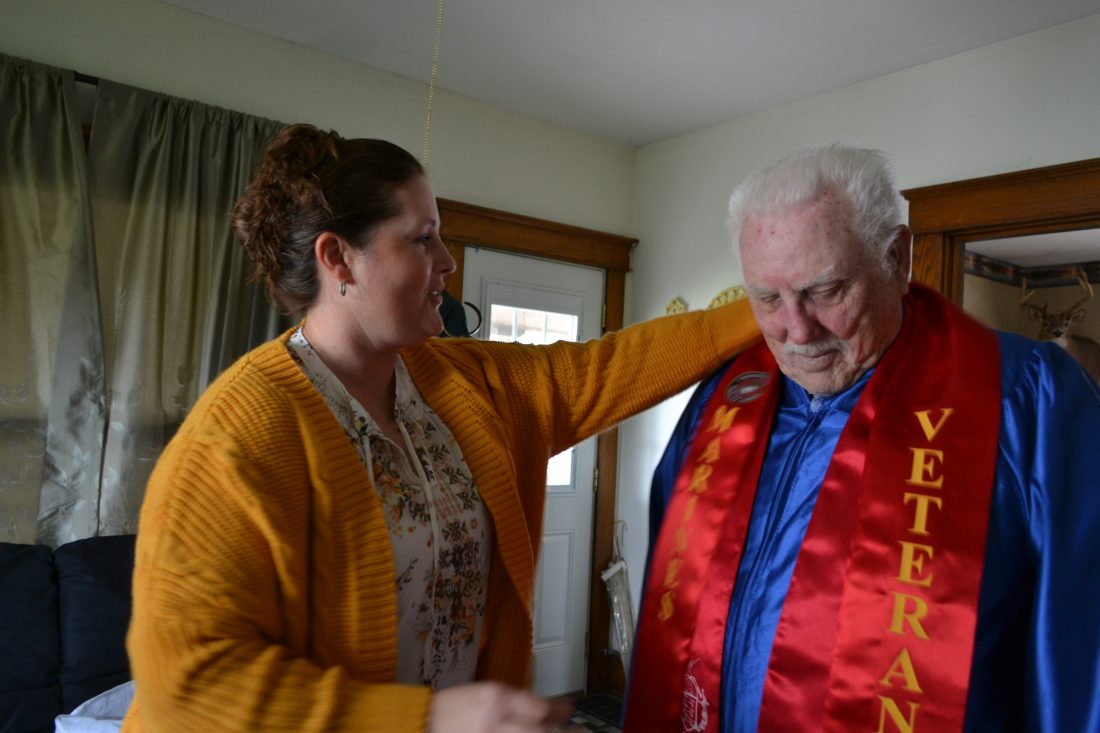 WARNER — In his 91 years of life, Wilbert Antill of Warner has done more than most people could do in two lifetimes. He has only one regret – never receiving his high school diploma.

He was honorably discharged from the U.S. Marines as a staff sergeant. He worked at a General Motors plant, he worked construction for Simms Brothers for 24 years and started Pennington Construction in 1979, retiring in 1990.

Antill was president of the Washington County Board of Health for 12 consecutive terms, leaving the board in 2014. He was a traveling minister and preached in Dalzell, Caldwell and at the Barnett Ridge Church of Christ. He received his real estate license and was a husband, father of 6, grandfather of 14, great-grandfather of 40 and great-great-grandfather of 8.

On Saturday at 6:30 p.m., he will receive his diploma from Fort Frye High School alongside his great-grandson, James Smith.

“Seniors are supposed to graduate, so I waited until I was a senior to graduate,” he said with a laugh.

Antill was preaching in Lower Paw Paw in 2018 and his granddaughter, Letha Haas heard it. The sermon was about how a man from Southeastern Ohio fell in love with a girl from Belhaven, N.C. During the sermon, he said his only regret was not getting his high school diploma.

“That broke my heart and I had to fix it,” Haas said. “But what do you do to get the diploma?”

She said she contacted Fort Frye High School and they helped to get things completed for him to graduate. All of Antill’s children graduated from Fort Frye, as well as many of his grandchildren and great-grandchildren.

Reminiscing with him on Thursday afternoon was his wife of nearly 69 years, Joyce, their second daughter, Ella Shaw and her husband, Jeff, and Haas, their granddaughter. Ella is a 1974 graduate of Fort Frye, while Haas is a 1994 graduate.

Haas is excited about her grandfather’s accomplishments and the diploma he will finally receive. Along with the cap and gown Antill will wear for the ceremony, Haas ordered his Marine dress blues. He plans to wear them this summer so he can get a photo with two of his grandsons, one in the Army and one in the Coast Guard.

“I want it to be the year of Wilbert,” Haas said, laughing.

From his list of past professions, Antill has been a hard worker his entire life.

“I worked a farm and dug coal when I was 16,” he said, noting he decided to enlist, but wasn’t sure which branch of the military.

When he went to Marietta to enlist, the Marines wasn’t an option. A friend told him about the Marines and that they had the best uniforms.

However, those who wanted to enlist in the Marines had to go to Parkersburg.

“The first person who drove by picked me up,” he said.

He spent three years stationed at Cherry Point, N.C., before he was shipped to Korea in 1951.

“I was an airplane mechanic,” he said. “There were 13 planes there and each had a captain.”

He said the plane captains did maintenance and pre-flight checks and there was one captain per plane.

“I usually worked on a Corsair,” he said. “I loved that plane. I think it was the fastest single aircraft in the world at that time.”

He had a variety of jobs after he was discharged, but in 1987, he joined the health board.

He was president for 12 terms, finally leaving the board in 2014.

He said he was president of the board when people wanted to outlaw smoking in Washington County.

“Every time a law passes, you lose your freedom,” he said.

Antill may have celebrated 91 birthdays, but it is obvious he is a generally happy, optimistic person.

Shaw said Antill has always been that way. When he gets up in the morning, he says to himself that a person can choose to make it a good day or a bad one.

“You’re the only one who can make you happy,” he said.

He left school and entered the U.S. Marines when he was 18.

He will be graduating alongside his great-grandson, James Smith.