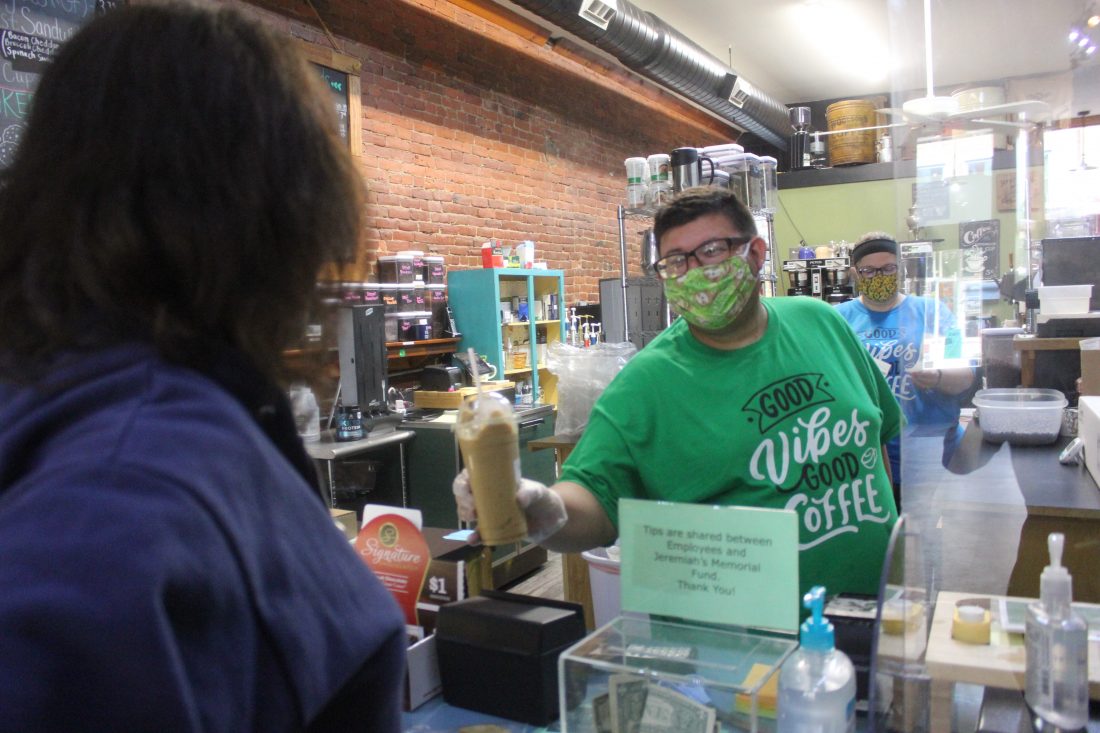 Photo by Janelle Patterson Jeremy Barth, Jeremiah's Coffee House manager, hands a specialty drink to a customer in the downtown Marietta restaurant Wednesday while masked and wearing gloves to adhere to restaurant guidelines by the Ohio Department of Health.

Marietta restaurants with permitted outdoor seating or with a private patio may begin serving food outdoors at their establishments today and in their dining rooms next week, if they follow distancing requirements under the Ohio health order.

But, a minimum of six feet between tables or a limit in total occupancy capacity may significantly hamper a restaurant’s operational economic rebound from the coronavirus closures of small, locally-owned businesses.

“I don’t see this side of the restaurant having a possibility of seating right now to maintain that distance for a line at the counter or to see the things in the (food) cases,” said Jeremy Barth, manager of Jeremiah’s Coffee House on Front Street. “We’re incredibly thankful to be able to do a lot with what we’re allowed to do so far, like marking where people can stand and having separate entrances and exits but we’re not seeing the breakfast or morning coffee crowds as much.”

And only having half the restaurant’s space to work with at what would result in approximately 25 percent seating capacity isn’t a promising outlook just yet.

“We’ve had to adjust but we are so thankful to be able to have those family meals (for takeout) and figure it out,” said Barth. “But it would be wonderful if we could have more outside space. We have our regulars whose routines have been completely affected by this and they’re adjusting but they want to be able to sit on the couch and drink coffee and read the paper or come and have their muffin, too.”

To expand outdoor seating for local restaurants, especially those without private patios, is an interest catching traction not only in Marietta but across Ohio.

This week, legislators, city elected officials, retail business owners, restaurant owners and entertainment business directors brainstormed possibilities of emulating models in Cincinnati and Lebanon in Ohio and areas in Florida to stimulate such business for locally-run and owned businesses.

Marietta Main Street held a closed-door meeting with some of those interests represented Tuesday afternoon to discuss a 2015 addition to state legislature called the Designated Outdoor Refreshment Area section in the Ohio Revised Code.

Marietta City Law Director Paul Bertram noted Thursday that DORA does not apply to the intended use of city streets, or city lands and parks for use to stimulate downtown business.

“The DORA doesn’t apply in any way, shape or form to a downtown area,” said Bertram.

He guided Councilman Geoff Schenkel Thursday in a meeting with the Times to instead look to laws already in place and operable within city codes to create temporary outdoor dining spaces.

In sequential order, any organization, nonprofit or sponsoring entity would need to complete the following steps, Bertram said, to utilize a portion or total city street block for the purposes of temporary outdoor dining, outdoor entertainment events or outdoor vendor/business goods sale:

1. Obtain a street festival permit through the city safety-service director.

Bertam pointed to Marietta Codified Ordinance Chapter 945 for the governance of city-owned streets for use as a fair, festival park event or other street closure.

He said the applicant for such a permit must follow the parameters set in that chapter, including defining the location boundaries, times of use, dates of the temporary events and organized rearrangement of traffic for the event times provided.

Bertram pointed out that without the additional intent to serve or sell beer, wine or spiritous liquor (mixed drinks, straight or shots) this would be an acceptable end in the process for a singular event like the annual Ohio River Sternwheel Festival or the past Brick Streets Arts Bash as referenced this week by Hunt Brawley, executive director of the Peoples Bank Theatre.

However, as stated in the aforementioned Marietta Codified Ordinance, “the obtaining of a permit hereunder does not relieve the permit holder or any participating exhibitor, vendor, demonstrator or performer from obtaining and complying with any other license or permit otherwise required by law.”

2. Obtain either an F-permit or an F-2 permit with the Ohio Liquor Control Board.

An F-permit allows for the temporary sale of only beer, within a designated zone, during a designated time, with the limit of entry and exit and a cap on surrounding businesses with another form of alcohol licensure with the state.

An F-2 permit allows for not only the temporary sale of beer under the same requirements above, but also the sale of wine and spirituous liquor.

3. Receive the blessing of Marietta City Council through legislation to temporarily waive the enforcement of the present open-carry prohibition.

As introduced in February, and later unanimously passed by the legislative body, this legislation would allow an event like the Riverfront Roar beer garden annually set up in the city-owned parking lot abutting the Marietta levee, as a controlled and sectioned-off location where open cups of alcohol could be consumed.

Cristie Thomas, executive director of Marietta Main Street, declined five public records requests for a list of names of the participating individuals of the closed meeting held by Thomas which she described as “local economic development leaders,” saying in an email that she doesn’t believe the organization is subject to Ohio Sunshine Laws.

Bertram stated Thursday that any not-for-profit organization which accepts government funds is subject to the same laws that govern townships, municipalities, county officials and other such government or quasi-government agencies. Marietta Main Street receives CDBG funding.