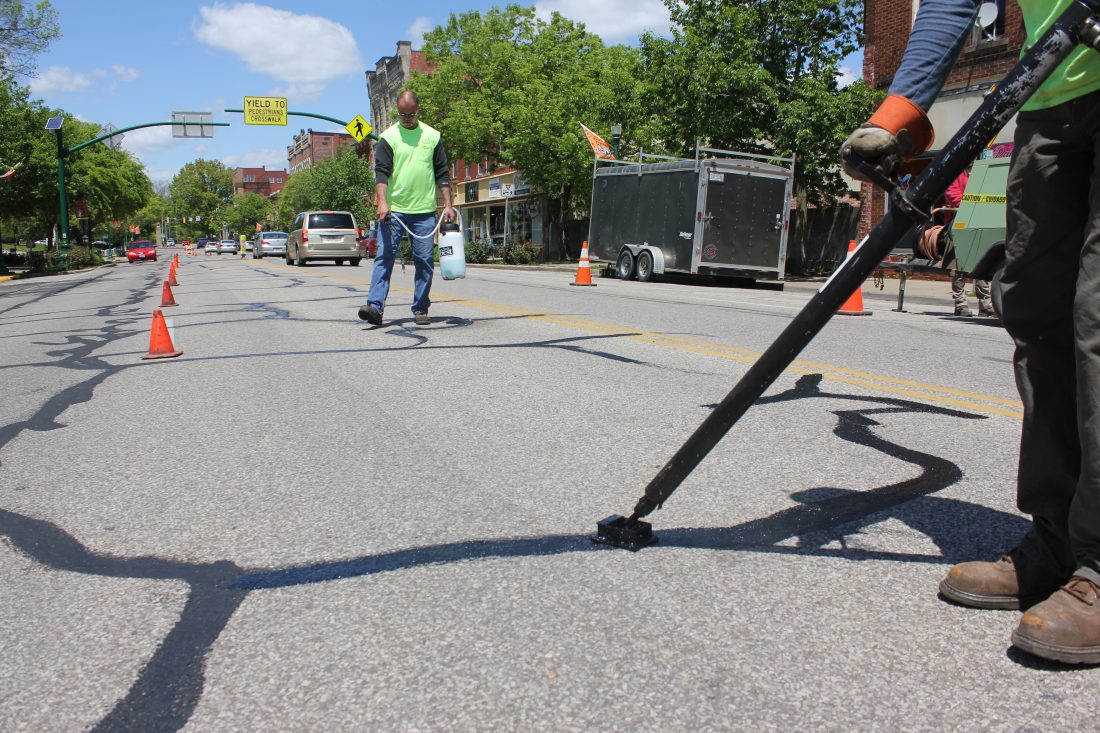 Photo by Janelle Patterson Crack sealing is part of maintenance efforts this week by Marietta laborers while they await word on furloughs and layoffs from city administration.

City and county finances still have an uncertain future, according to administrators buckling up for the impact of COVID-19.

The reason local governments are nervous?

Without individuals traveling for more than essentials, gasoline tax revenues (which fund road repairs) auto sales tax revenues and lodging tax (hotels and motels) revenues are all expected to drop.

“And with unemployment, that may mean less income tax revenues. We were so far holding our own on income tax but ADP is a company that does a lot of payroll for local companies and organizations and we haven’t seen their report yet,” said Councilman Mike Scales. “We should know at the end of this week where we’re headed with all of our income.”

At the county level, Washington County Auditor Matthew Livengood said discussions with the budgeting arms of agencies and the county commissioners have been on the possibility of a 20 percent loss in sales tax revenues.

“We’re adjusting as we go, but they’re letting the departments know it may mean a cut of 20 percent,” said Livengood. “The biggest impact is definitely going to be our sales tax. We receive those revenues (from the state) three months later, so our distribution we’ll receive this month will be from March’s sales.”

Livengood said the first true hits to county coffers may be seen in June and July.

“But online sales did pick up a bit, not enough I don’t think to offset the losses,” he added.

Near the end of April, furloughs were announced and then quickly postponed by the Marietta city administration after four grievances were filed by union representatives advocating for 48 Teamsters employees.

“These are uncertain times,” said Wetz. “We don’t know how the income tax will be impacted.”

Wetz said both furlough and layoff options are being considered by the city administration at this time.

Livengood said even in the last recession of 2008, Washington County property owners still paid their property taxes at a high rate.

“So on property taxes I’m not as concerned because I think for the most part people are prepared for that since we know it’s coming every year,” he explained. “I wouldn’t put (a dip) past 5 percent.”

The worst-case scenario that townships and schools which partially rely on those funds may budget for is a drop to 85 percent of expected local property tax revenue.

That does not take into account unknowns at the state funding level which Gov. Mike DeWine has signaled may greatly impact local schools.

– City and county finances are anticipating up to a 20 percent hit on revenues that fund government services locally.

– Washington County agencies are to prepare for potential cuts.