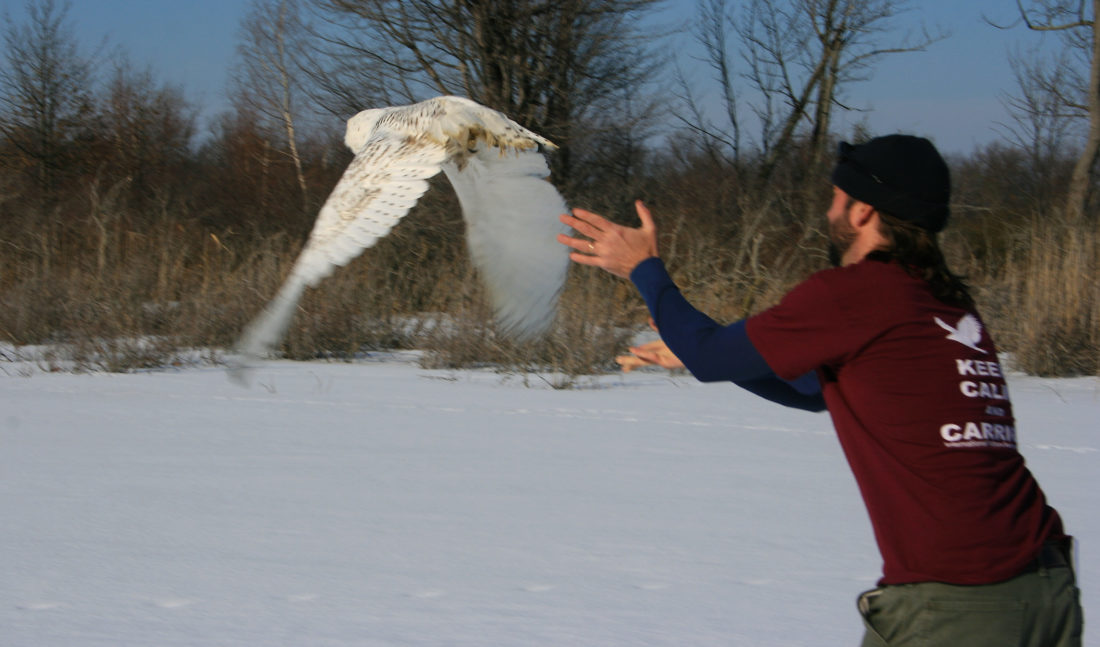 Photo provided by Joey Herron of Fairmont, W.Va. Dr. Jesse Fallon, director of veterinary medicine at the Avian Conservation Center of Appalachia in Morgantown, releases the snowy owl on Saturday at Presque Isle State Park on the shore of Lake Erie near Erie, Pa. The owl was found injuried in Vienna in late December, treated for a shoulder injury, strengthened back up and released back into the wild over the weekend.

MORGANTOWN — The snowy owl that was found injuried in Wood County about a month ago was released back into the wild on Saturday.

Officials with the Avian Conservation Center of Appalachia in Morgantown confirmed the young male owl, believed to be 7 to 8 months old, was released over the weekend at Presque Isle State Park on the shore of Lake Erie near Erie, Pa.

Dr. Jesse Fallon, director of veterinary medicine at the avian center, said the owl was taken that far because it was determined that was the southern end of the species’ normal winter range.

“It was closer to where he was supposed to be,” Fallon said. “That was his best chance to get back to the Artic where they do their breeding.”

The bird was first spotted in Wood County in late November or early December and spent time along Grand Central Avenue in Vienna. It was coaxed by avian specialists to leave its perch on a pole in Vienna on Dec. 21 and was brought to the Morgantown center.

Officials determined the owl had been hit by a car, suffering a right wing injury, in early December. Fallon said the bird’s right shoulder was fractured and the bird itself was severly emaciated.

While at the center, its shoulder was treated and officials worked to increase the bird’s weight. After a a few weeks, they began exercising the wing so it could regain its strength. Fallon said the owl did well on a number of test flights in enclosed spaces.

During his time at the center, the owl gained 1.5 pounds and was close to an ideal weight.

Before release, officials put a special bird band on the owl. If it is ever recovered again, someone will be able to identify it as that particular owl.

Upon its release, Fallon said the bird did good.

“The bird flew away exceptionally well,” he said.