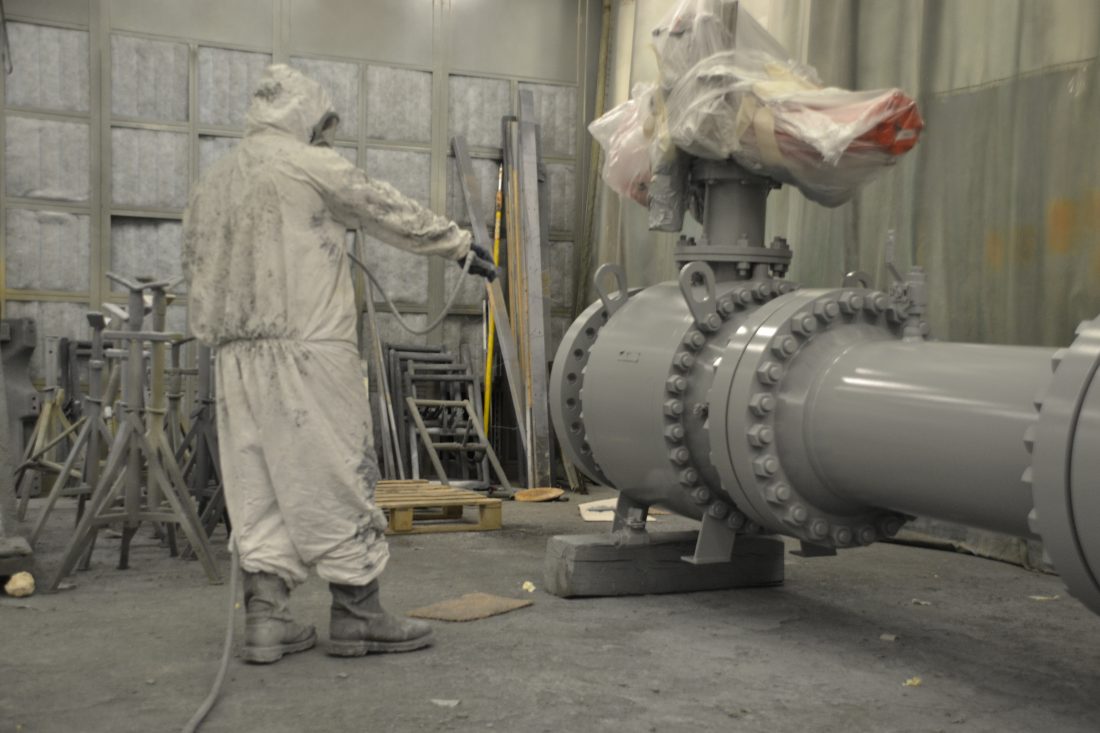 MICHAEL KELLY The Marietta Times Coatings applicator Damon Drake stands by a pipe fixture being resurfaced by Advanced Industrial Services on Thursday afternoon. The company is nearly finished with a $1 million expansion of its operation on Blue Knob Road.

Painting is more than just a chore with a bucket and a brush, Jeromy Woods said.

Industrial coatings is part science, part aethestics and hard work. Woods, the painting and coatings manager at Advanced Industrial Services, said the service is an investment recognized by his customers – which include Dupont Chemours, Pioneer Pipe, Eramet and other industrial players in the Ohio Valley – as a way of extending the useful life of high-cost equipment.

As a large part of its business, the company applies industrial coatings to pipes, valves and other plant fixtures to inhibit corrosion. Established in Marietta in 2013, it outgrew the 13,000-square foot building where it started in the R.O. Wetz warehousing complex on Blue Knob Road and is now finishing an expansion that will give it 28,000 square feet of specialized indoor working space and accommodate enough new demand to more than double its workforce over the next two years, Woods said.

The new building, which is in use while workers put finishing touches on it, is an investment of $1 million, Advanced regional branch manager Chad Morrison said. The building includes two paint shops and a sandblasting area.

“We saw revenue of $400,000 the first year, in 2013, and Jeromy and his team have been able to grow the business by offering quality work,” Morrison said. “He had a vision of what this industrial paint shop should look like, convinced the leaders to invest, he’s turned this shop into a $5-million-a-year operation. It’s a testament to their hard work and dedication.”

Woods on Thursday afternoon gestured around the new area, pointing out features he said will allow the business to expand its clientele and upgrade the operation.

“It became apparent in the first two years that we were undersized,” he said.

Sandblasting, which fires abrasive pellets at surfaces to strip everything down to bare metal, has been made more efficient by the installation of a recovery system that recycles the material – most of it, he said, isn’t actually sand but particles of coal slag – meaning lower consumption and less environmental impact. Painting booths are arranged so that items to be coated – these include massive pipe and valve complexes that occupy an entire flatbed trailer – get moved through the building from one step to the next with a minimum amount of handling.

Woods said the expanded plant will also reduce the operation’s vulnerability to the weather.

The staff, now 11 full-time workers including applicators in the plant and those who go out to do site work, are all union members.

“These guys are chemists to a certain degree, they are all certified applicator specialists, they have a serious understanding of what they do,” he said. “They care about their work, they’re professionals, they are long-term career people.”

The objects they apply coatings to are used in industrial plants and for underground uses such as pipelines. Woods, who has worked in the field for 25 years, said coatings can extend the life of machinery, pipes, valves and other costly infrastructure by years and sometimes decades, which is why the service is in high demand: It’s expensive, but it saves money.

“Our customers, we want them to know that we’re here,” Morrison said. “My job is business development, and it’s amazing to me that people don’t even know what we do. We’re the premier coating facility in the region.”

Woods said his goal is clear.

“We want to have the best quality available,” he said.

Advanced Industrial Services has five locations in Ohio and is a division of the Irex Contracting Group, which has operations in 35 locations in the U.S. and Canada.