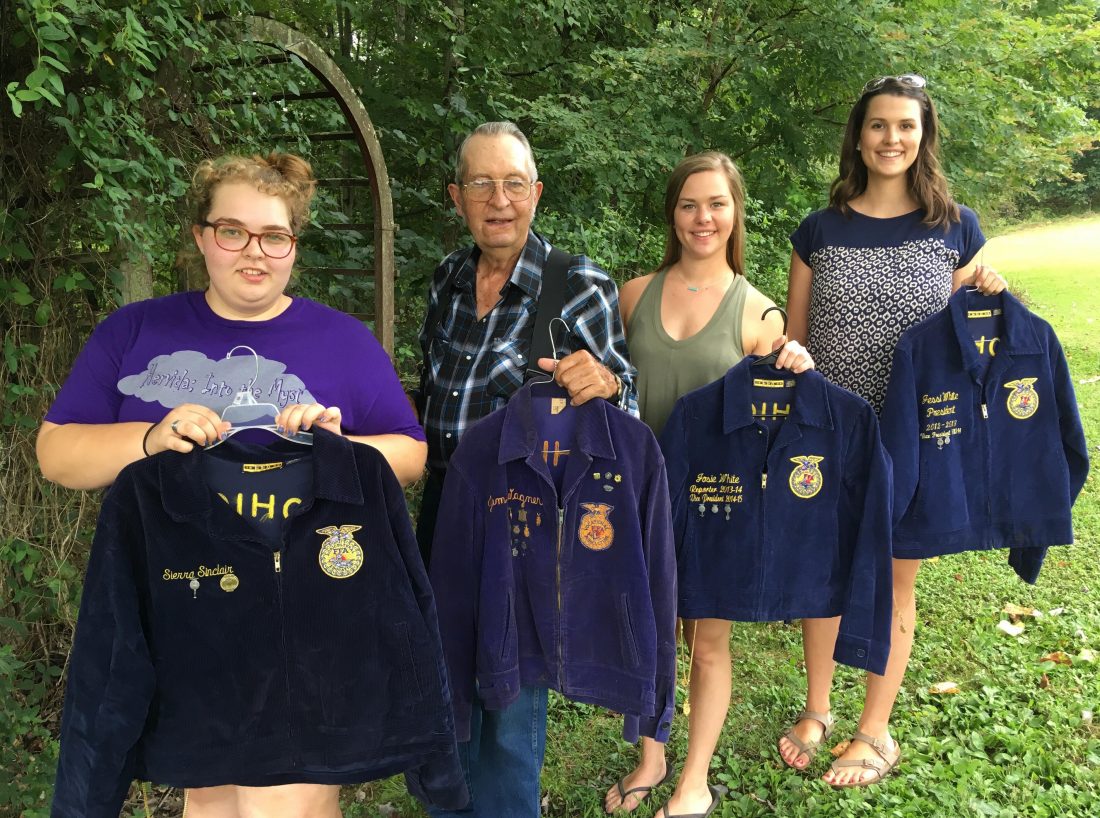 VINCENT – When Jim Wagner’s mother started the first 4-H group for Palmer Township in 1952, she most likely didn’t realize she was paving the way for a family tradition.

For multiple generations now, the family has been active in the FFA, bonding them to their community and to each other.

Wagner was 10 at the time he joined 4-H, and lived on a farm, so it was natural for him to gravitate toward organizations like FFA and 4-H.

He eventually joined the FFA, showing dairy cows at the fair.

“My job was to feed the calves before school,” he explained. “We milked about 50 cows.”

Today, Wagner lives on a farm in Vincent with Sandy, his wife of almost 60 years. She met Jim when they were in fourth grade and she was in the Future Homemakers of America, a sister organization to the FFA.

“The FFA and FHA did a lot of things together,” she said. “Waterford is very close knit.”

Jim’s sophomore year in high school, he was recorder for the Waterford FFA. His junior year he moved up to vice president, and became president his senior year.

While in the FFA, Jim learned how to judge wool, lambs and dairy cows.

“I showed her and her descendants,” Jim said of the heifers.

Although the Wagner’s four children didn’t join FFA, they joined 4-H. When their granddaughter, Jessica White was old enough, she wanted to continue what her grandfather started in FFA.

She graduated from Fort Frye High School in 2013 and teaches agriculture education at Monroe Central Middle School in Woodsfield.

When she graduated, she was president of the Fort Frye FFA, where she showed boar goats and pigs at the fair.

Her mother, Beverly resident Suzi White, said her daughters were raised on a farm and had raised goats.

“They started 4-H in kindergarten. They started with goats in 4-H,” she said. “When they got of age, they started FFA.”

Jessica’s younger sister, Josie, graduated in 2015, becoming vice president of the Fort Frye FFA her senior year. She is studying nursing at the University of Cincinnati, where she will graduate this spring with her RN degree.

She raised goats, rabbits and pigs to show at the fairs.

“They enjoyed FFA and soil judging, livestock judging and some of those types of things,” Suzi said. “Especially Jessica, since she’s still in it. Easton is her son, and I’m sure he’ll be in (FFA).”

The Wagner’s third granddaughter who moved up the ranks in the FFA is Warren High School senior Sierra Sinclair.

“I guess as far as FFA goes, I was in 4-H when I was 7. It was a draw for me, when you grow up with something, it becomes a tradition,” she said.

She got the opportunity to take an agricultural education class, as she heard her grandfather and cousins talk about being part of the FFA.

“I didn’t totally understand everything about the organization, but when I signed up for classes in eighth grade, I also didn’t understand in the whole the opportunities I’ve had, the memories I’ve made and the things I’ve learned as part of FFA,” Sinclair said, who plans to attend Marietta College to eventually teach middle school English and history.

Along with her cousins and grandfather, she has also gotten her State FFA Degree.

Both Josie and Jessica also received their American FFA Degree.

“They get their state degrees in high school and their American degrees when they were freshmen in college,” Suzi explained. “They have to continue and finish their service with FFA.”

Sandy said the girls have learned a lot from their time in the FFA, including how to be gracious if they don’t win.

“By not winning, you learn a lesson. Life’s not going to go perfect,” Sandy said. “They get to learn that.”