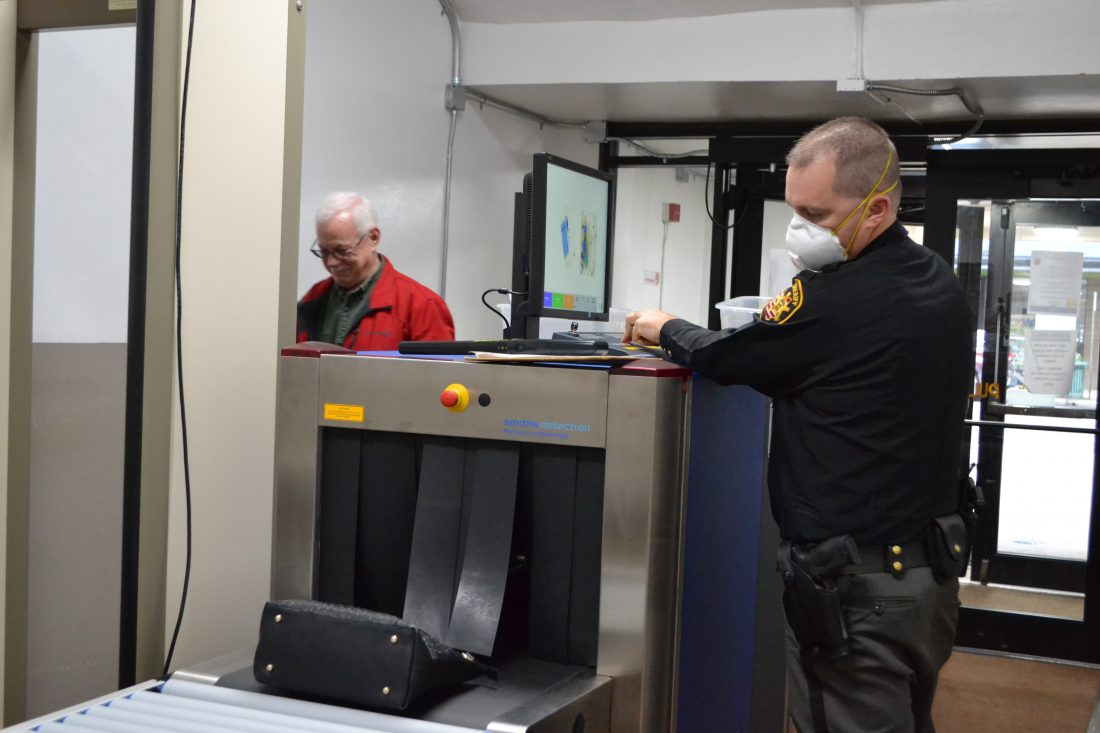 Photo by Michele Newbanks Deputy Justin Sheaves handles the bag of Belpre resident Anita Francisco, while her husband, Bob, walks through the metal detector Friday at the Washington County Courthouse.

The latest tool in a measure to increase security was added Thursday to the Washington County Courthouse.

An X-ray unit was still being fine-tuned by the technical team on Monday, said Washington County Chief Deputy Mark Warden.

Washington County Probate Judge Timothy Williams, along with the courts and the Washington County Sheriff’s Office, applied for a $35,275 grant through the Ohio Supreme Court last August. The grant covered the cost of the machine, installation and training. In December, Williams got notification he was granted the funding, and he received the check in late January.

“Judge Williams was the driving force behind it,” Warden said.

Williams said as soon as the check was received, they put in the order for the machine. So far, it’s going well, he said.

“Deputy (Jim) Malone said it’s really making it a quicker process, instead of digging through bags and briefcases,” he said. “It’s a lot safer for everyone in the courthouse.”

Williams had wanted an X-ray machine for the security point at the courthouse, but no money was available. He found out in January of 2019 that a grant was available that other counties had used to purchase the X-ray units. The grants are available for Ohio appeals, common pleas, municipal and county courts to upgrade systems, hardware or equipment, or to purchase new ones.

The unit is being used in conjunction with the metal detector and handheld scanners to check bags for weapons, drugs or other contraband.

The supreme court did a physical security assessment years ago and found a lot of issues, including the lack of security for the judges. The supreme court recommended the courthouse have a single entrance and exit, along with the metal detector and X-ray machine.

Security measures undertaken at the courthouse last year include the manned single point of entrance and exit, the installation of a new multi-camera security system, the metal detector, handheld scanners and locked exterior doors.

One of the safety measures recommended was that every courthouse have a security plan, and Washington County’s was adopted July 1.

“I think everything is now in place. That was the final piece as far as I’m aware,” Williams said. “All the cameras are in…and the door alarms.”

He said he got a demonstration on Friday, and the clarity of the machine was really good, whether it was scanning coins or keys.

“The deputies seemed excited about the technology,” he said.

Part of the cost of the unit was training, so two deputies from security and transportation, Malone and Justin Sheaves, were sent to Gallia County last week for on-the-job training. The county has the same X-ray equipment.

Williams said the unit was originally scheduled to arrive at the end of April.

“It came in about a month early,” he explained. “We knew it was coming, but we were surprised it was early.”

•A new X-ray unit was installed Thursday at the Washington County Courthouse.

• The $35,275 unit was funded through an Ohio Supreme Court grant last August.

•An X-ray unit is used in conjunction with metal detector and handheld scanner.